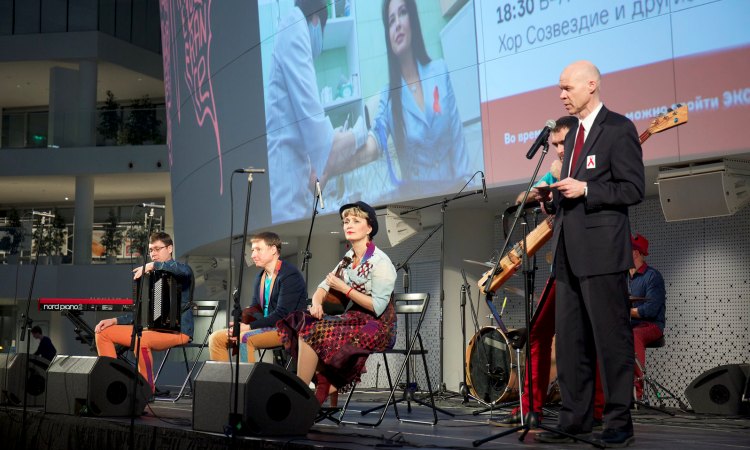 Photo: US Consul General opens the World AIDS Day Gala at Yeltsin Center with Izumrud musical group on stage (Photo belongs to the US Dept of State)

A World AIDS Day gala arranged in collaboration with the Boris Yeltsin Presidential Museum, and Consulates General of the United States of America, Republic of Cyprus, Federal Republic of Germany, the United Kingdom, Hungary and Republic of Bulgaria took place at the Yeltsin Center in Yekaterinburg on December 1, 2016.

The event included a video conference on HIV prevention with Nina Murray of the Environment, Science, Technology and Health Section of U.S. Embassy Moscow, a diverse concert program that included performances by Yekaterinburg musical groups, such as Izumrud, directed by Mikhail Sidorov; The Russian Singers Male Concert Choir, directed by Sergey Pimenov; The Soloists of Russia Chamber Orchestra BACH, conducted by Nikolay Usenko; the Boys Choir Sozvezdiye, directed by Sergey Kiselev, as well as students dance groups, to include the Rocking Raccoons of the Urals Federal University, the Studio of Tap Dance Theater Step; directed by Igor Petukhov; and Dance for Children group of the HIV/AIDS servicing NGO New Life. The show brought together university students and faculty, medical professionals, members of non-profit organizations, cultural and educational communities, Rotary clubs and other professional and business organizations. The guests had an opportunity to take a free HIV test at site of the event, and also have a picture taken with UNAIDS hashtags. Furthermore, gifts from Yeltsin Center and the diplomatic missions were raffled among audience members. A UNAIDS video and photo projected on the venue’s wall-size screen provided an excellent overview of the international efforts to fight the pandemic, with a focus on UNAIDS programs that achieve the common goal of putting an end to the AIDS pandemic by 2030 in the framework of sustainable development.

The World AIDS Day Gala in Yeltsin Center highlighted the vitality of community involvement and value of international cooperation in the face of global threats like HIV/AIDS.