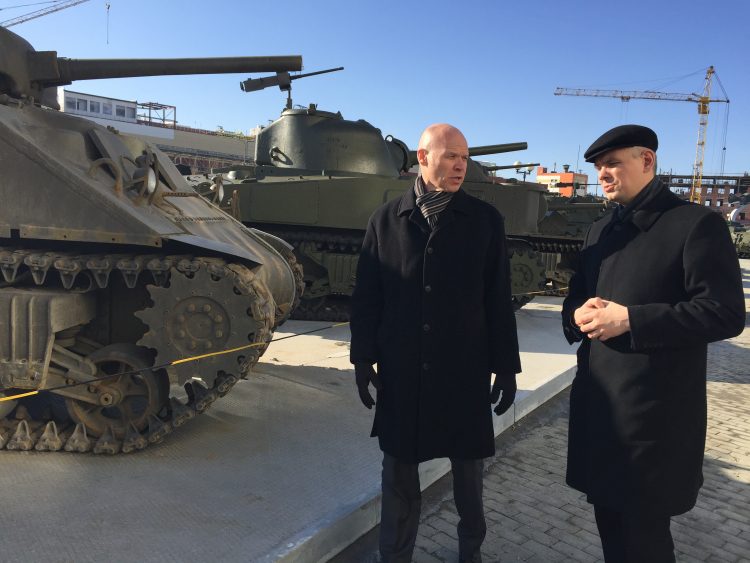 On March 9 U.S. Consul General Marcus Micheli visited UMMC’s Museum of Military Technology (also called the Ural Military Glory Museum) and its Automobile Museum in Verkhnaya Pyshma. With one of the most extensive and interesting collections of military equipment in all of Russia, the Museum of Military Technology consists of two major parts – a 3-story exhibition hall, and large open-air exhibit. Museum Director Aleksandr Yemelyanov showed Consul General Micheli the truly impressive array of tanks, aircraft, vehicles, artillery, and other items housed at the site, which include examples of the renowned “Katyusha” rocket launcher and “T-34” tank. The museum also contains a number of aircraft and vehicles provided by the United States to the USSR under the Lend-Lease program during World War II. These include a Bell P-39 “Airacobra” fighter plane (a favorite aircraft of the great Soviet aces Aleksandr Pokryshkin and Grigory Rechkalov) and an assortment of Dodge and other trucks and Stuart and Sherman tanks. During WWII, the United States provided the Soviet Union with approximately 18,000 aircraft, more than 400,000 jeeps and trucks, and approximately 12,000 armored vehicles, including 7,000 tanks.

Following the tour of the military museum, with its rows of massive tanks, Consul General Micheli also visited the UMMC Automobile Museum, which contains a wonderful collection of gleaming and festively colored cars produced in the USSR, United States, Germany, Italy, and other countries. A shining beige 5-passenger Buick 32-90, produced in Detroit in 1931-33, met us at the entrance, and then Consulate representatives were shown well-known Soviet cars such as the Pobeda, Chaika, and Volga, and many other exhibit items that will fascinate the most demanding automobile enthusiasts.