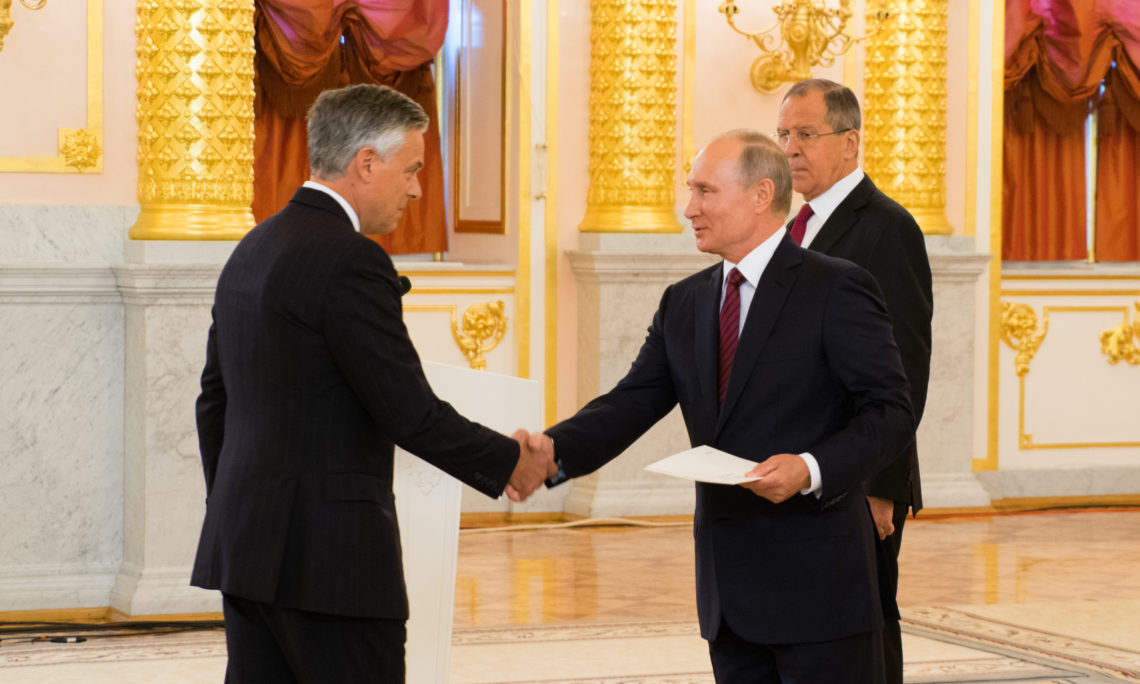 U.S. Ambassador to the Russian Federation Jon M. Huntsman, Jr. presented his credentials today to President Putin in a ceremony held in the Kremlin’s Alexander Hall.

“As the U.S. Ambassador to the Russian Federation,  I look forward to working to rebuild trust between our two countries and to strengthening the bilateral relationship based on cooperation on common interests  I will seek out Russian people from all walks of life to share perspectives, to relay American values, and to deepen my growing appreciation for Russia’s rich and fascinating history and culture.  My wife Mary Kaye and I look forward to meeting as many Russian citizens as possible during our travels throughout the country and discovering what we have in common,” said Ambassador Huntsman following the ceremony.

Jon M. Huntsman, Jr. is a prominent politician, diplomat and businessman, whose distinguished record of public service includes two terms as Governor of Utah (2005-2009), and service as  U.S. Ambassador to China (2009 – 2011) and to Singapore (1992 – 1993).  In addition, he served as Deputy United States trade representative (2001-2003), Deputy Assistant Secretary of Commerce for East Asia and the Pacific (1990 -1992), and Deputy Assistant Secretary of Commerce for the Trade Development Bureau (1989-1990).  He began his career in public service as a White House Staff Assistant to President Ronald Reagan.

Ambassador Huntsman received his B.A. from the University of Pennsylvania in 1987 and has been the recipient of numerous awards, including eleven Honorary Doctorates from various universities and the Distinguished Eagle Scout Award (2008).