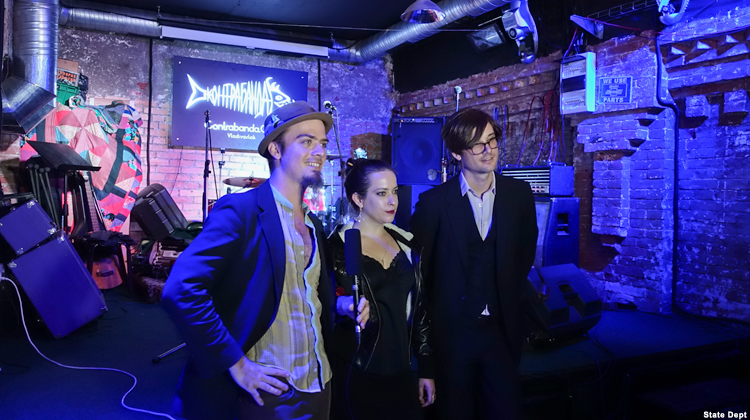 May 24 – June 6, Portland, Oregon-based folk musician trio “Three for Silver” carried out a robust music diplomacy program in three capital cities of the Russian Far East.  This project was made possible when the Khabarovsk-Portland Sister City Association invited the trio to perform at the Khabarovsk City Day.  U.S. Consulate General Vladivostok expanded the initiative and helped the three American musicians, masters of an array of folk instruments (mandolin, fiddle, accordion, auto-harp, and even a self-made bathtub contrabass), reach audiences throughout the region with their eye-opening and inspiring concerts.  “Three for Silver” folked out in front of thousands in a 45-minute concert in Khabarovsk’s central square and followed up in that regional capital with a master class at a local arts college and two night club concerts.  Their tour continued with packed club gigs in Vladivostok and Blagoveschensk and further master classes in Vladivostok.  The musicians were game for multiple high-profile media events, with TV companies in Khabarovsk, Vladivostok, and Blagoveschensk recording special programs highlighting the American “folk music ambassadors” and broadcasting reports on their shows and master classes; the musicians also starred in a 20-minute live radio show, conducted interviews with online and print media, and even did a photo session for a glossy magazine.