It was the iconic moment that nearly didn’t happen.  The two fronts in the European campaign of the Second World War meet, cutting Germany in two and heralding the imminent victory of the Allies over the Nazis.  Everyone knew it was going to happen, the two ground forces finally meeting face to face in 1945.  But when, where, and with what effect? 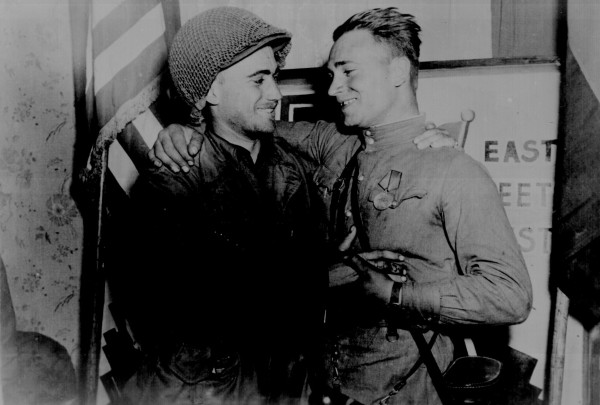 As it turned out, Soviet and American forces were closest in the patchwork of German resistance that ranged from fierce and desperate around the capital, Berlin, to crumbling and chaotic elsewhere.  Closest of all were the U.S. 69th Infantry Division and the Soviet 58th Guards Rifle Division.  Their forward elements had pushed to the Mulde and Elbe Rivers, about 40 km apart, east of Leipzig and some 130 km south of Berlin.  Both had been ordered to halt at their respective rivers.  Both had received instructions from their corps, army, and army group/front headquarters concerning recognition signals and details of meetings by commanders.  There was great concern to keep Allied combat units from blundering into firefights with one another.   And so, for several days in April 1945, each side waited for the other to meet it – unaware that the other side was also waiting. 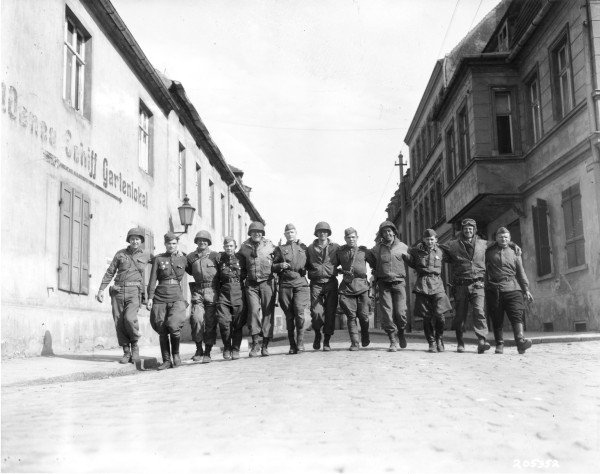 American and Soviet soldiers march arm in arm through the streets of Torgau on April 26, 1945.

Up and down the line, meeting fever was taking hold.  The 69th pushed patrols out with orders to “meet the Soviets”, but to go no further forward than five miles in their efforts to do so. In the end, the caution and careful plans of higher echelons collided with the enthusiasm and initiative of junior officers and young soldiers, all in the fog of war.  The first meeting was about noon on 25 April with no recognition signals and no incidents of “friendly fire.”  An American lieutenant leading one patrol crossed the Elbe to meet with officers of a regiment of the 58th Guards on the east bank, but reported his location inaccurately.  When his division tried to confirm the confusing report, the light aircraft that flew to the reported coordinates saw no Americans and took ground fire. 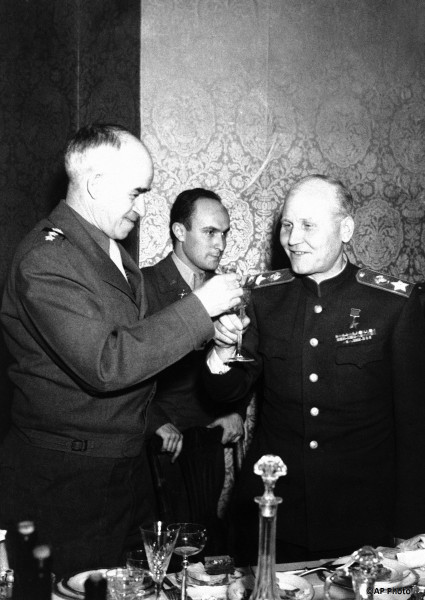 Meanwhile, another U.S. patrol – with a battalion S-2 (intelligence officer) 2nd lieutenant, three enlisted men and one jeep – stretched a mission to deal with prisoners of war and refugees and continued all the way to the city of Torgau on Elbe’s west bank.  There he was fired on by elements of a different regiment of the 58th who were suspicious of the improvised American flag that the lieutenant had rigged to identify himself, since he had no flares to answer the agreed upon signal.

Finally establishing his identity with the help of a freed Soviet POW, at about 1700 hours Lt. Robertson crawled out on the girder of the destroyed bridge across the Elbe to meet a Soviet soldier who had crawled out from the opposite side.  Robertson continued to the east bank and sparked an improvised celebration with the Soviet unit.  Lacking a radio to report back to his headquarters, Robertson had three Soviet officers and an NCO cross back (in a boat this time) and pile in his jeep to drive back to his HQ.  Proof positive that a meeting had taken place – in the form of Soviet officers – moved from battalion to regiment to division, before  the officers were returned in the middle of the night to their unit opposite Torgau.

And so began the orderly meeting of regimental, division, corps, and army commanders in the course of the next several days. Torgau, perhaps otherwise destined to be remembered more for its association with Martin Luther’s wife, Katharina von Bora, became the place where those meetings would occur.  And where what became known as the “spirit of Torgau” would be born. 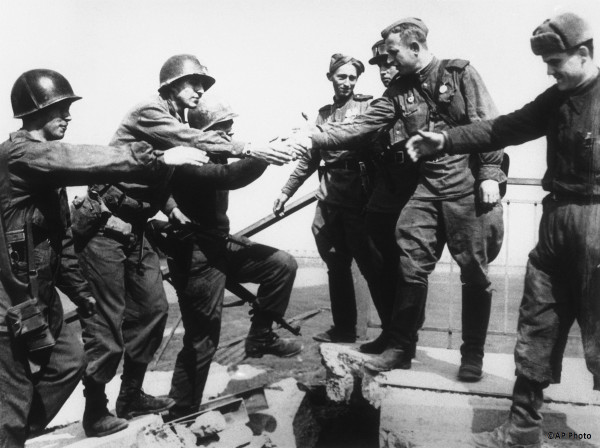 Infantrymen of the U.S. First Army , left, extend welcoming hands to Soviet troops on a damaged bridge over the Elbe River at Torgau, Germany on April 25, 1945.

What was that spirit? It was simple joy of the common soldiers at the certainty that peace was coming and there was a good possibility they would live to see it.  It was a glimpse of a better future.  It was frustration that differences of language and culture and history prevented a fuller expression of what was similarly perceived and expressed through smiles, embraces, and simple acts of courtesy and friendliness to one another.  It was groping forward into the unknown land between two peoples to establish contact.  It was crawling out over a fast-flowing river on a badly damaged bridge to touch hands and smile and exchange greetings that may have been in a foreign language, but were unmistakable in meaning.

In a real sense, the spirit of Torgau was a symbol of how relations between the Soviet Union and the West, and especially between Moscow and Washington, could turn out to be during the post war period.  And finally, it was a something to hold on to in the course of the Cold War, a time when we celebrated at the personal level and exchanged more formal visits at higher echelons, and when enterprising individuals really could bend the rules and, with luck and initiative, make things better between the two sides.

This was the spirit that Joe Polowski held onto for a lifetime.  Joe was one of the privates in the patrol that met the Soviets south of Torgau, but saw the slightly later meeting downriver become the focus of the Meeting on the Elbe.  After the war and demobilization, he was a cab driver in Chicago, and looked back on the events of April 1945 as the defining moment in his life.  He authored the “Oath on the Elbe,” which captured the spirit of Torgau in its soldiers’ simple hope for lasting peace.  When he died in 1983, he was buried at Torgau in accordance with his wishes.  Such was the powerful pull of place. Group of American and Soviet Army officers and war correspondents toasting each other
to celebrate meeting of U.S. and Soviet Armies at Torgau, Germany, on the Elbe River on April 26, 1945.

The spirit also lived on in locations removed from the city on the Elbe.  Throughout the Cold War, members of the American and Soviet Military Liaison Missions in the formerly occupied zones of Germany held Torgau Day commemoration events.  These units, vestiges of the immediate post war necessity for coordinating interests in each other’s area of occupation, quickly evolved into monitors of the large military forces “permanently” stationed in a divided Germany.  Their essential task was to help keep the Cold War cold by reducing the threat of misperception.  Once a year the Americans and Soviets could put aside this role and remember when their predecessors met on the Elbe.

At the Potsdam House of the US Military Liaison Mission to the Commander-in-Chief of the Group of Soviet Forces in Germany, a separate room dedicated to Torgau was the focus of these annual events.  Memorabilia of the event covered the walls, including photographs of the formal meetings of participants.  In a pair, the same handshake of commanders was captured by a Soviet and an American cameraman, standing on opposite sides.  Each is visible in the photograph taken by the other, caught in the act of recording the event.  It was somehow an icon of the moment.  So was the photograph of soldiers from each nation walking together –  arms over shoulders, smiling – down a Torgau street.

Other individuals also carried on the memory, even though they had been children (or not even born) when the meeting on the Elbe took place.  At one point, the Defense Attaché at the American Embassy in Moscow, who had previously served in the Potsdam Mission, commemorated the event with a reception.  It was a chance for the two militaries to remember as soldiers what Torgau meant to those who had gone before, to honor the memory of the soldiers who had fought in the war, and to cherish the hope they had had for a just and lasting peace. 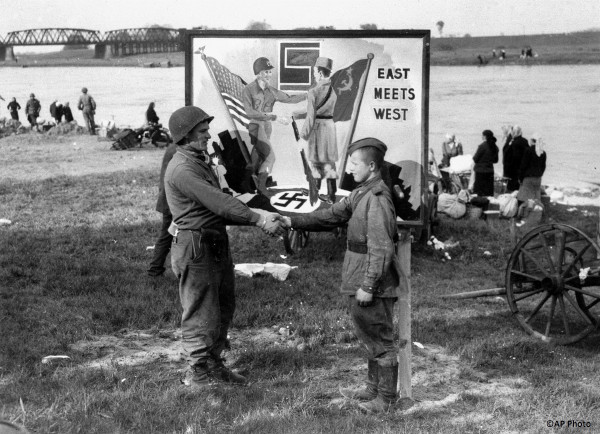 A soldier with the 1st U.S. Army shakes hands with a Soviet counterpart,
emulating the ‘East Meets West’ sign in the background,
during the historic meeting of Allied fronts, by the river Elbe at Torgau, Germany, April 26, 1945.

Two weeks after the meeting on the Elbe, the war in Europe ended with the unconditional surrender of Nazi Germany.  That surrender already contained hints of the enduring contradictions and divisions that would grow in the postwar period.  Significantly, even the date of victory would be observed a day apart in Russia and the West.  But the ensuing misunderstandings and misperceptions during the Cold War – a time when each side had an array of nuclear weapons and massive armies held in high readiness to defend against each other in divided Europe – would have been incomprehensible to the Torgau soldiers who clapped one another on the back, who shared souvenir dollars and rubles, rations and “liberated” beer, who reached across a broken bridge over a dangerous river to clasp hands in joy at survival and success in a common cause.

We would be poorer without the meeting on the Elbe.  Perhaps it had little or no military significance, but it was and is of immense enduring importance.  The spirit of Torgau is a reminder of the better angels of our nature, of mutual hopes in the midst of grim realities, and of what can and should be when we are mired in what is for the moment.  That the meeting almost didn’t happen is also a gentle warning.  We can easily overlook the simple hopes than unite us.  We can sit behind our respective front lines, waiting forever for the other to come to our side.  We must be realists, we must take account of the dividing differences.  But we must never forget the day that soldiers on both sides crossed the no man’s land between them, met, and overcame the division of language with the common smile of gratitude and joy.

Brigadier General (retired) Greg Govan served in the U.S. Army for 31 years, primarily as a specialist on the Soviet Union and Arms Control, after initial duty in Germany and two tours in Vietnam.  He served twice (including as Chief) with the U.S. Military Liaison Mission to the senior Soviet military commander in Germany, and three times (twice as Defense Attaché) in the US Embassy, Moscow.  His last military assignment was as Director of the On-Site Inspection Agency, responsible for inspections incident to all arms control treaties and agreements to which the United States is a party.  As a Foreign Service Officer he served for six years as the senior arms control representative to the governing bodies of the Conventional Armed Forces in Europe and Open Skies Treaties, where he was confirmed with the rank of Ambassador in 2000.   Greg and his wife, Jane, live in retirement outside Charlottesville, Virginia.