Home Главная страница | News & Events | Statement by Ministers of the Global Coalition: Meeting on the Defeat of ISIS 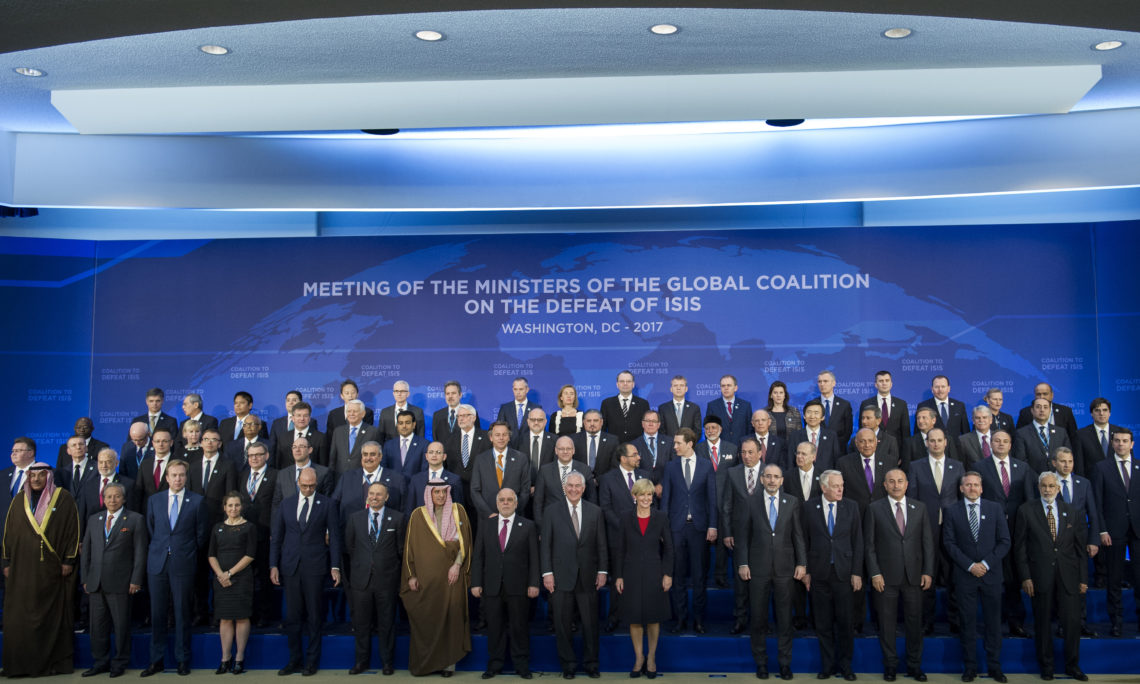 Secretary of State Rex Tillerson, bottom center, and delegates to the Meeting of the Ministers of the Global Coalition on the Defeat of ISIS, pose for a photograph at the State Department in Washington, Wednesday, March 22, 2017. Top officials from the 68-nation coalition fighting the Islamic State

Office of the Spokesperson
Washington, DC

The following is the text of a statement by the Ministers of the Global Coalition: Meeting on the Defeat of ISIS.

1. Foreign Ministers of the Global Coalition met in Washington today at the invitation of U.S. Secretary of State Rex Tillerson to review and accelerate the campaign for the lasting defeat of ISIS. We remain firmly united in our outrage at ISIS’s atrocities and in our determination to eliminate this global threat and overcome its false, destructive narrative. We reiterate our commitment to an integrated, multidimensional, and comprehensive approach to defeat ISIS and its global networks, fully recognizing this will require sustained, focused efforts.

2. We welcome the decisive milestones to date in reducing ISIS’ territorial control and degrading its leadership, access to resources, and global networks. We commend the efforts of our Iraqi partners, who have liberated more than 60 percent of their territory once held by ISIS and made significant progress recovering Mosul. We are gratified that Syrian partners have cleared ISIS from more than a third of the territory it once controlled in Syria. Now ISIS is on the defensive in Raqqa. We commend the efforts of Coalition and Syrian opposition forces who, via Operation Euphrates Shield, have successfully cleared ISIS from al-Bab, Dabiq, Jarabulus and other areas. Overall, the number of ISIS fighters has been reduced by half. They have been scattered in Libya and pressed on multiple fronts elsewhere, including Afghanistan and Africa. Outside of Iraq and Syria, we have put greater pressure on ISIS’ branches and global networks. Coalition partner information sharing, diplomatic engagement, and military strikes have put pressure on ISIS finances. Multinational cooperation has disrupted potential attacks worldwide, degraded ISIS’ ability to operate across international borders and diminished its on-line influence.

3. We recognize that the gains against ISIS have not been without cost. We honor the sacrifices of our partners, notably those in Iraq and Syria, but also in Libya, Afghanistan, Turkey and elsewhere in Africa and the Middle East, who have been on the front lines of this effort. We also recognize and deplore the suffering of countless civilians because of ISIS, exemplified by its violence against men, women and children, enslavement and trafficking of women, recruitment of child soldiers and persecution of minority communities.

4. Looking ahead, we are committed to denying ISIS sanctuary and to preventing ISIS from dispersing its fighters, weapons, or resources within Iraq and Syria or elsewhere. Our Coalition is committed to supporting local forces as they move to liberate Mosul, Raqqa and other ISIS strongholds and work toward its final defeat. We also stand ready to help liberated communities recover from the damage and suffering inflicted by ISIS. We underscore the need for safeguarding civilians, as well as full and immediate humanitarian access, especially for UN agencies and their partners, in order to address the basic needs of the communities liberated from ISIS, as well as displaced persons and others in need in besieged and hard-to-reach areas of Syria.

5. ISIS cannot be allowed to re-emerge in areas it once held in Iraq and Syria or spread to the wider region. While the primary responsibility lies with national and local governments, support for stabilization and public safety in liberated communities continues to be a top priority for our Coalition. Successful stabilization and long-term recovery will stem from good governance, the provision of services, and security arrangements that benefit all communities. We welcome the pledges by Coalition partners to assist with stabilization, demining, humanitarian and public safety requirements in liberated areas of Iraq and Syria. We are gratified that ‎partners have already pledged more than two billion dollars for such assistance in 2017 and continue to provide other vital support, notably for the Italian-led police training program in Iraq. Such contributions will create the conditions necessary for local reconciliation and for affected families to return home voluntarily, safely, with dignity, and at a time of their choosing. We welcome efforts to help Syrians promote stability in liberated communities and resist inroads by extremists. In all liberated areas, we support efforts to promote community-level reconciliation and accountability for ISIS’s crimes. We stand ready to support further development of Iraq’s comprehensive plan for the stabilization of Mosul and the coordination of international support.

6. We strongly support Prime Minister Abadi’s vision for an Iraq free of ISIS and his government’s work to enhance public services, reinforce inclusive governance, reduce corruption, decentralize certain federal authorities, and ensure the equal rights of all Iraqis irrespective of their ethnicity, gender, religion, or belief, in line with the Iraqi Constitution. We applaud the Government of Iraq for protecting civilians in conflict zones. We reaffirm our unwavering support to Iraq and its unity, sovereignty and territorial integrity. We encourage the Government of Iraq to persevere in its work toward national and local reconciliation, stabilization and reconstruction of liberated areas.

7. The Coalition stands with the Syrian people in support of a genuine political transition based on the 2012 Geneva Communique and UNSCR 2254, aimed at establishing an inclusive, pluralistic, and non-sectarian government that represents the will of all Syrians. To this end, we support the mediation efforts of UN Special Envoy Staffan de Mistura. A negotiated political resolution to the conflict is essential to bring about the defeat of ISIS, achieve peace in Syria, and preserve the sovereignty, independence, and territorial integrity of Syria. We recognize the contribution of the Astana meetings in paving the way for the resumption of UN-sponsored talks in Geneva. We condemn all indiscriminate violence and violence targeting civilians, whether by the regime and its supporters, ISIS, al-Qaeda affiliated groups, or other armed actors. We are united in our call for a genuine commitment to a sustained ceasefire and for full, unobstructed humanitarian access. We express concern for the plight of refugees and internally displaced persons and stress the imperative of building conditions for their safe return, consistent with the principle of non-refoulement and in accordance with applicable international law and taking into account the interests of host countries. The Coalition welcomes the “Conference on Supporting the Future of Syria and the Region” in Brussels on 5 April 2017 as a positive step to benefit the people of Syria.

8. We commend Libyan Prime Minister Sarraj and the forces aligned with the Government of National Accord (GNA) for the liberation of the city of Sirte from ISIS. We pay tribute to those Libyans who have lost their lives or have been wounded confronting ISIS in Sirte, Benghazi, and in other parts of the country. However, the continued political and security instability in Libya risks undermining the strategic objectives of political reconciliation and countering terrorism. We call on all parties including the relevant security actors to commit to the Libya Political Agreement and resolve their differences through dialogue and national reconciliation. We also remain vigilant against the threat of ISIS in other parts of the country and continue to support efforts to deprive it of finances, fighters, and avenues of recruitment and influence.

9. We commend the efforts of the Government of Afghanistan, along with its National Defense and Security Forces, in the fight against ISIS and in implementing its National Strategy against ISIS.

10. We recognize and support efforts by Nigeria and its partners to defeat ISIS affiliates and stabilize affected areas in the Lake Chad basin region.

11. Coalition members are actively disrupting ISIS networks that move individuals, material and funds to enable external attacks. Information sharing, enhanced traveler screening and law enforcement cooperation – including collection of evidence admissible in courts of law – are essential to this effort, as is the ability to prosecute and penalize foreign terrorist fighters and others providing material support to ISIS. We encourage information sharing through INTERPOL and other collective law enforcement channels, such as EUROPOL, as well as through financial intelligence unit (FIU) channels. We encourage members to contribute and screen against records of lost and stolen passports, foreign terrorist fighter profiles and biometric filters maintained in INTERPOL’s global criminal investigative databases. We likewise encourage establishing access between INTERPOL’s I-24/7 system and all borders and ports of entry to prevent, interdict and deter foreign terrorist travel. We underscore our support for international frameworks – including, but not limited to, UN Security Council Resolutions 2178 and 2253 – along with institutions such as the Global Counterterrorism Forum, the Financial Action Task Force, and the Egmont Group of FIUs, to curb foreign terrorist fighter travel, financing, trafficking and illicit trade, including in controlled materials. We support greater international cooperation to repatriate artifacts stolen by ISIS and others as a source of income for terrorist activities, consistent with obligations established by applicable UN conventions and resolutions.

12. The Coalition supports enhanced efforts to prevent radicalization and recruitment into ISIS and its branches by addressing the factors underpinning its emergence and continued appeal. Success against ISIS’s radicalization and recruitment efforts includes strengthening social cohesion and enhancing the resilience of communities – including teachers, social workers, religious leaders, women and youth – to recognize and respond constructively to these challenges. We recognize that returning ISIS fighters may pose a threat to their home countries and that we must address the issue by various means that may include reintegration and rehabilitation, as well as monitoring, investigation, and prosecution.

13. We will intensify our efforts to confront ISIS in the digital battlespace and reshape the public narrative around ISIS to one of failure. Members will continue their collaboration to discredit ISIS’s propaganda, emphasizing credible, authentic voices that provide alternative narratives to challenge ISIS’s world view. We will work with the private sector to develop long-term, sustainable initiatives that make communities, especially youth, more resistant to ISIS’s message. We welcome private sector initiatives to prevent ISIS and its supporters from exploiting social media platforms. These include technical means to facilitate removal of material which violates terms and conditions for users.