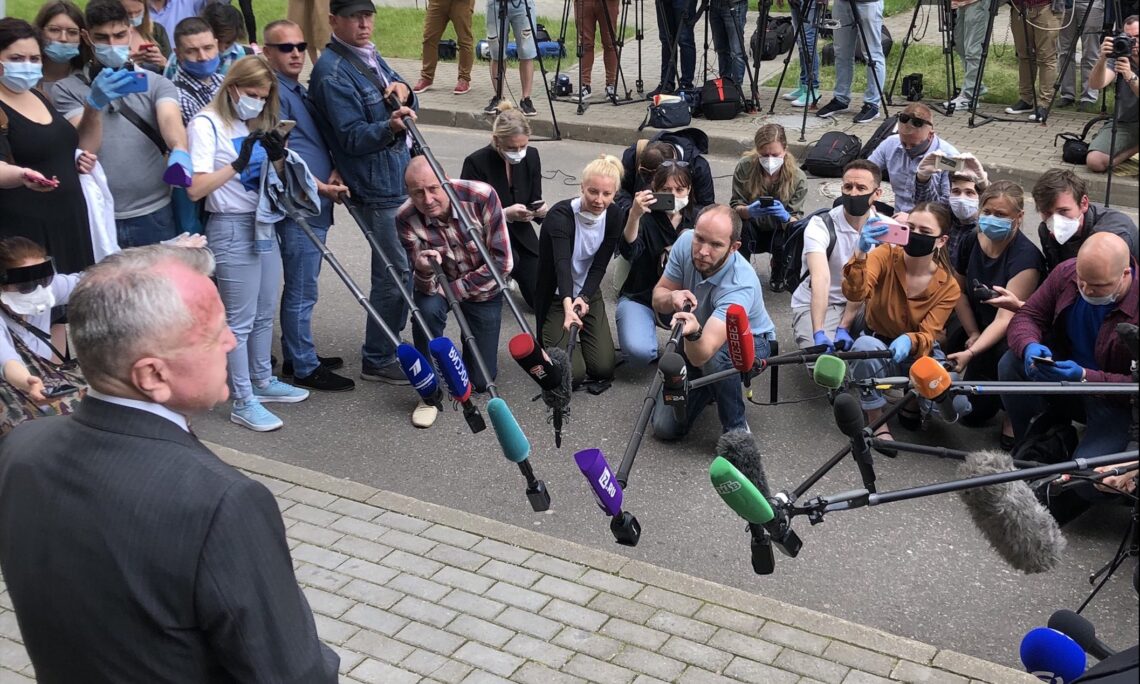 Outside the Moscow City Courthouse after Paul Whelan’s Sentencing

Ambassador Sullivan:  Good morning everyone.  I’m disappointed, crestfallen, outraged at what I’ve just heard.  An American citizen, who’s also a citizen of three other countries – the United Kingdom, Canada, and Ireland – has been sentenced to 16 years, so I’m told.  There was a judgement that was read by a judge – a three-judge panel – in Russian, which Paul couldn’t understand.  I was able to see him from a distance.  And he’s been sentenced to 16 years in prison with no evidence that’s been produced.  There was no evidence recited by the judge to justify the detention that he’s already been subjected to – which is a year and a half.

As you know, I’ve been following Paul’s case closely since I arrived here as Ambassador in January.  I’ve described these proceedings as a mockery of justice and today just confirmed it.  An American citizen has been sentenced to a term of 16 years for a crime for which we have not seen evidence – he has not seen evidence.  He was denied the opportunity to present witnesses in his defense.  He was denied the opportunity to work cooperatively with his defense counsel, and his defense counsel were appointed for him.  They’re not the defense counsel he selected.

So this is a mockery of justice, at least by American standards.  By my standards as a lawyer trained in the United States.  We’re committed to — for all the criticism that the Russian government has levied against the United States over the years, including most recently, one thing I’ve not heard criticized is our criminal justice system.  Our federal criminal justice system.  Our commitment to due process.  The fundamental rights which are fundamental human rights around the world of a public trial, conviction only after a public trial, with the opportunity to contest the charges and present evidence.  Paul’s been denied that from the beginning.

So, it’s a mockery of justice.  I can’t say I’m surprised.  This is the direction this case has been going in from the beginning, but it won’t lessen my commitment to continue to work for Paul’s release – demand Paul’s release – and I hope all fair-minded citizens, here in Russia and around the world, would have the same reaction to this.  Because if they can do this to Paul, they can do this to anyone.  A secret trial, with the inability to present evidence, defend oneself, and then being sentenced to sixteen years in prison.  It’s a mockery of justice, in addition to the fact that he’s been horribly mistreated.  The fact that prison authorities and Russian government authorities waited until he had a dramatic health emergency, even though they’d been alerted to the fact that he had this problem, waited months and months to get him medical treatment until it was a dramatic emergency where he needed surgery on a rush basis.

He wasn’t able to speak to his family – his elderly parents – for almost a year and a half, until fairly recently.  So, to say I’m troubled by this is an understatement.  I know Secretary Pompeo feels the same way.  And this Department, our Embassy, the United States, will continue to work as hard as we have been, and that’s pretty darn hard, to get Paul released – to demand his release, to call for others – you, in the media, hold the Russian government responsible for what they have done.  Get Paul released.

I’m going to turn to my colleague the UK Ambassador Deborah Bronnert, and then I will take some questions.

Ambassador Sullivan:  Well, I have a lot of things to do.  First thing I want to do is speak to Paul’s family, tell them I laid eyes on him, that I saw him.  And also consult with my government in Washington, which as I’ve said, at the highest levels is extremely concerned by what’s happened here today.  Secretary Pompeo has spoken a number of times about Paul’s case.  So, we still have a lot of work to do to get justice for Paul, and to get Paul released and back with his family so he4 can speak to them personally.

Q:  What is the likelihood of some kind of prisoner exchange, Ambassador?

Ambassador Sullivan:  I’m in no position to discuss prisoner exchanges.  We’ve just – Paul has now just become a convict in the Russian system.  I’m advocating for justice for Paul.  I would hope, even if it doesn’t bother your conscience, it might bother you personally that if they can do this to Paul, they can do this to anyone.  Right?  Paul’s an easy target because he is not a Russian citizen, so that was an easy case.  But they can do it to anyone.  So what we are looking for is not an exchange, we are looking for justice for Paul and his release.

Q:  But will you ever get justice?  When you say that this is…

Ambassador Sullivan:   We have not but it won’t stop me from trying, from speaking to you, from working with my government and engaging with the Russian government on this issue.

BBC:  Ambassador, Paul Whelan specifically asked President Trump to intercede on his behalf.  Will you – is it your understanding that President Trump will engage on this… [inaudible]

Ambassador Sullivan:  Well, certainly the President is concerned about all detained Americans.  Paul – I am told he is.  The Secretary is concerned.  I am concerned.  Concern is an understatement.  This is a gross injustice.  The relationship of the United States with Russia is very broad and complex.  It’s not just a bilateral to bilateral government engagement.  It’s the relationship between hundreds of millions of people who have longstanding relationships.  Is this an impediment?  Absolutely.  Absolutely.  I raise this at every opportunity with my Russian interlocutors.  It is absolutely an impediment to better relations between the United States government and the Russian government.  Is it going to stop us from talking?  Absolutely not.  We have a lot of things we need to talk about.  My colleague Marshall Billingslea will be going to Vienna to meet with Deputy Foreign Minister Ryabkov to talk about arms control issues in a week.  That’s just one example.  There are a lot of things that we need to work with the Russian government on.  The Whelan case is one of them, and a significant one, and it makes it difficult for us to make progress on other cases when we see an innocent American treated as shabbily as Paul has been.

Ambassador Sullivan:  I am not going to comment on forthcoming tweets from the President.  We’ll wait to see what Washington has to say.

Ambassador Sullivan:  I, as his representative, speaking on his behalf, am not just asking, I am demanding justice for Whelan.  I speak on behalf of the President, as his Ambassador.

Ambassador Sullivan:  Well, this is not going to have a good impact on our relationship.  Our relationship, as I’ve said many times since I arrived in January, our relationship has really reached a low ebb in the post Cold War period.  I want to work as hard as I can to try and improve that relationship.  Paul’s case is an important part of improving that relationship but there are many other issues that we need to talk to the Russian government about.  But, make no mistake about it, Paul Whelan is a [inaudible] priority, a priority for me personally as an American, for me as Ambassador, as the President’s representative.  I have no higher priority than getting justice for Paul which means getting Paul released.

Ambassador Sullivan:  This was a trial where a man’s freedom was at stake.  And he was denied any semblance of due process.  I approach it as a lawyer – that’s what this has been about.  And until we get justice for Paul and Paul released, we are going to keep advocating on his behalf, both for his personal wellbeing and safety, and for his ultimate release.  Thank you.