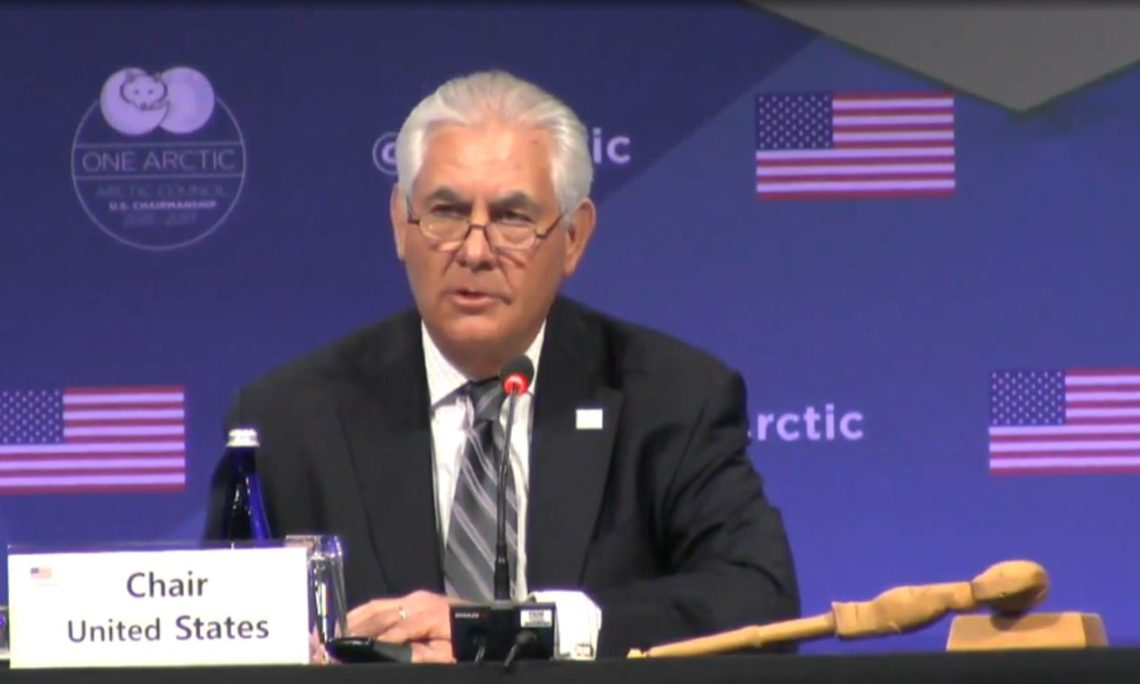 SECRETARY TILLERSON: Well, it’s my pleasure to welcome all of you, foreign ministers, permanent participant heads of delegation, Arctic Council observers, and honored guests. And I want to thank again the tribal leaders of the aboriginal groups for their greeting this morning and their very meaningful message to all of us, and we appreciate their opening this session for us.

I want to welcome all of you to the 10th Arctic Council Ministerial Meeting and this beautiful city of Fairbanks, and we thank them again for their great hospitality in hosting us.

I would now call your attention to the provisional agenda for this meeting and seek its adoption.

SECRETARY TILLERSON: As I see no delegates seeking the floor, I take it that the agenda can be adopted without change. It is so decided.

As the next agenda point, I would like to call for the adoption of the SAO Report to Ministers.

SECRETARY TILLERSON: As I see no delegations seeking the floor, I take it that the report can be adopted without change. It is so decided.

Let’s turn to the agenda item on the accomplishments of the Arctic Council during the U.S. chairmanship.

The United States had been privileged to lead the Arctic Council at a time when the Arctic Region has been facing unprecedented change and challenges.

I am grateful for the level of cooperation that the nations and the peoples of the Arctic have demonstrated as they continue to address these challenges.

The Arctic Council, which recently celebrated its 20th anniversary, has proven to be an indispensable forum in which we can pursue cooperation. I want to affirm that the United States will continue to be an active member in this council. The opportunity to chair the Council has only strengthened our commitment to continuing its work in the future.

We look forward to working with Finland as they assume the leadership role of this council. There are still issues of great concern to each of us that we can address, including advancing the welfare and living conditions of those who call the Arctic home; recognizing that each country has a strategic interest in being part of the Arctic’s future; and making sure that we continue to be vigilant in protecting the fragile environment.

In the United States, we are currently reviewing several important policies, including how the Trump administration will approach the issue of climate change. We are appreciative that each of you has an important point of view, and you should know that we are taking the time to understand your concerns. We’re not going to rush to make a decision. We’re going to work to make the right decision for the United States. The Arctic Council will continue to be an important platform as we deliberate on these issues.

I could not hope to mention all of the individual initiatives and programs that the Council has brought to fruition over the past two years under U.S. chairmanship. Each of the Council’s subsidiary bodies has done outstanding work in this respect, and I do wish to acknowledge and commend all of their efforts, even as I highlight but a few.

The signing of the Agreement on Enhancing International Arctic Scientific Cooperation will facilitate the movement of scientists, scientific equipment, and importantly, data sharing across the international boundaries of the Arctic.

The Council has produced the first-ever assessment of telecommunications infrastructure in the Arctic. During the Finnish chairmanship, the Arctic Council will build on this work in conjunction with the private sector to advance this ongoing effort to strengthen connectivity throughout the Arctic Region.

Arctic Council members have conducted multiple exercises to prepare for potential search-and-rescue events in the Arctic as well as to coordinate responses to environmental incidents. These exercises significantly advanced our capacity to address risks inherent in the increased human activity that is undergoing and will continue to expand in the Arctic Region.

At the community level, the council broke new ground in a number of ways. A compelling initiative known as RISING SUN has produced resources that will prove truly valuable to Arctic residents in addressing suicide prevention, particularly among indigenous youth. The council also built on work initiated by the State of Alaska to improve water and sanitation capacity in rural Arctic communities.

As Arctic shipping continues to increase, the Council took a number of measures designed to ensure that such shipping remains safe and reliable, including the Arctic Ship Traffic Database that will improve our understanding of the ship traffic in the Arctic, including the number and types of vessels in the Arctic, their exact routing, and other important information.

And finally, the Council has strengthened resilience at the national and local levels in the face of environmental and other change.

I could go on at length about our shared accomplishment, but I am certain other speakers today will mention the many other Arctic Council projects deserving of recognition.

Let me close my remarks by thanking again all of those involved in these initiatives – the many government officials, the permanent participants, the working group and task force chairs, the secretariats, the observers and invited experts. The last two years have witnessed remarkable growth in the reach and productivity of the Arctic Council, thanks to all of you. And I am confident that, under the leadership of Finland, the Council is poised to do even more.

With that, we’re ready to move to the next agenda item, which is the statements from the Arctic States and from the permanent participants. I now offer the floor to each of the other heads of delegation in turn for these statements, beginning with Canada.