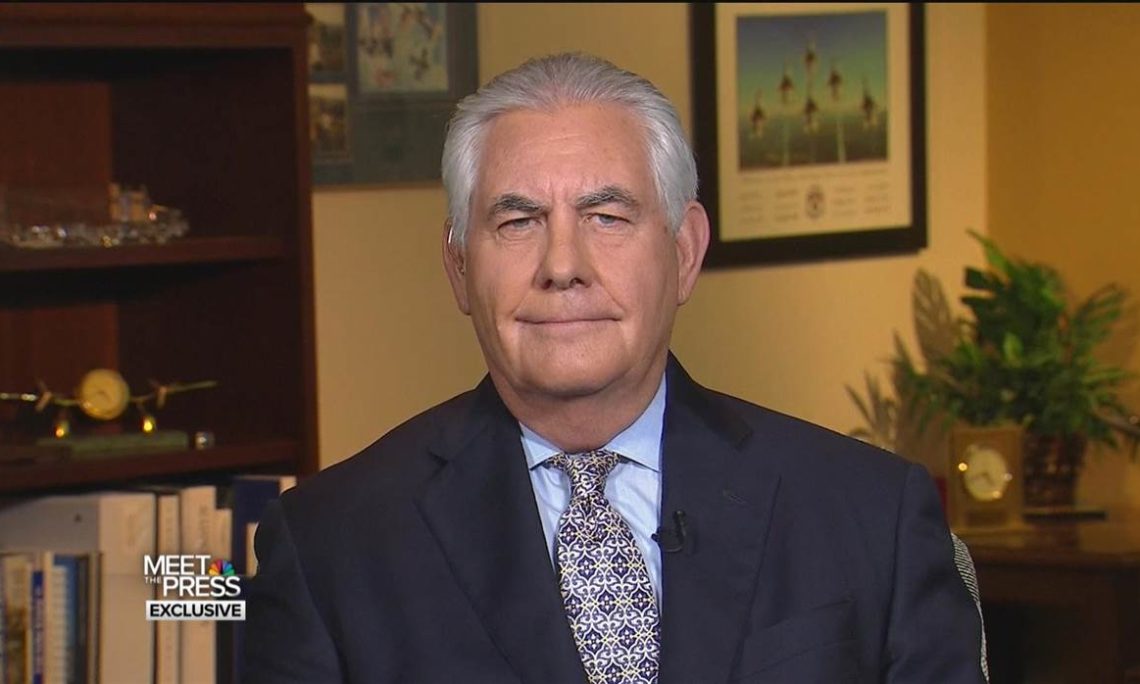 Secretary Tillerson's Interview With Chuck Todd of Meet the Press

QUESTION: Yesterday, I sat down with Secretary of State Rex Tillerson, and I began by asking him whether he agrees with the President that the Russia story is fake news and a witch hunt.

SECRETARY TILLERSON: Well, Chuck, the President, I think, has made it clear that he feels it’s important that we re-engage with Russia. The relationship with Russia, as he has described and I have described as well, is, I think, at an all-time low point since the end of the Cold War with a very low level of trust. I think the world – and it’s in the interest of the American people, it’s in the interest of Russia, the rest of the world, that we do something to see if we cannot improve the relationship between the two greatest nuclear powers in the world. So the President, I think, is committed to at least make an effort in that regard, and he has certainly asked me to make an important effort as well.

QUESTION: I understand that. But you look at what’s happened in these Western European nations – in France, in the U.K., in Germany, Italy – accusations of Russian interference in their democratic process. What message does it send to those countries that their number one ally, the United States, the President, fired the man at the agency that was looking in to the very problem they’re dealing with – Russian interference in the democracy?

SECRETARY TILLERSON: Well, Chuck, what I hear from the leaders of the other nations, Europe and more broadly – and the subject of Russia comes up in all of our conversations – is all the other nations want the U.S. and Russia to work towards improving our relationship as well, for all the reasons that I just mentioned.

I think it’s largely viewed that it is not healthy for the world, it’s certainly not healthy for us, for the American people, our national security interest and otherwise, for this relationship to remain at this low level. Whether we can improve it or not remains to be seen. It’s going to take some time. It’s going to take a lot of hard work. But I think the President is committed, rightly so, and I am committed with him as well, to see if we cannot do something to put us on a better footing in our relationship with Russia.

QUESTION: Can you get on a better footing with them if you don’t address this issue of the Russian interference? I mean, your counterpart, the Russian foreign minister, Mr. Lavrov, said that you guys didn’t even talk about this issue of Russian interference in our election because, as he put it, the – President Trump himself says it’s fake news so it’s not an issue. Why haven’t you brought it up with them?

SECRETARY TILLERSON: Well, Chuck, I think we have such a broad range of important issues that have to be addressed in the U.S. – Russia relationship. Obviously, the interference in the election is one of those. I think it’s been well documented. It’s pretty well understood – the nature of that interference here and elsewhere. And these are not new tactics on the part of the Russian Government directed not only at us but at others. But again, I think we have to look at this relationship in its broadest contours, and there are many, many important areas which require our attention if we are to bring it back to a relationship that we believe is necessary for the security of the U.S.

QUESTION: Mr. Secretary, though, this is fundamental. They interfered with our democracy. I just don’t understand how this is not a top issue for you to deal with them in order to essentially start with a clean slate. You can’t start with a clean slate until maybe they either own up to what they did or we punish them in a way that they’re not going to do this again.

We’re starting with the slate we have and all the problems that are on that slate. We don’t dismiss any of them. We don’t give anyone a free pass on any of them. They’re part of the entire nature of the discussion we’re having with the Russians. And yes, there are a large number of issues that we have to get around to addressing in order to put this relationship back together, if that is indeed possible.

QUESTION: During your confirmation hearings, you made clear you didn’t – you didn’t have – obviously, you hadn’t been briefed on the intelligence reports, the 17 different agencies that came to the conclusions that the Russians did make an effort to interfere in this election. Obviously, there’s an investigation going along to see if there was any collusion in this interference.

Since you’ve become Secretary of State in February, have you been briefed? Have you seen this intelligence now? Is it clear in your mind that it is a fact the Russians interfered in our elections?

SECRETARY TILLERSON: I have seen the intelligence reports, Chuck. And yes, I don’t think there’s any question that the Russians were playing around in our electoral processes. Again, and those intelligence reports also have indicated it’s inconclusive as to what, if any, effect it had.

QUESTION: I understand about the impact. But the fact that they got into it – what – what should the repercussions be now in your mind?

SECRETARY TILLERSON: Well, they’re just part of that broader landscape of conversations, Chuck. And I think the real impact is it serves yet again to undermine the trust between the United States and Russia. And as I have said and the President has said, we’re just at a very, very low level of trust between our two countries right now. And so what we’re exploring is how do we begin the process of restoring that trust, and ultimately, it will touch on all of these issues.

QUESTION: I want to give you a chance to respond to an op-ed that Senator John McCain wrote, where he invoked your name, sir. He said this: “In a recent address to State Department employees, Secretary of State Rex Tillerson said, ‘Conditioning our foreign policy too heavily on values creates obstacles to advance our national interest.’” McCain goes on to write, “With those words, Secretary Tillerson sent a message to oppressed people everywhere: ‘Don’t look to the United States for hope. Our values make us sympathetic to your plight, and when it’s convenient we might officially express that sympathy.’”

Some pretty tough words from Senator McCain. What do you say in response?

SECRETARY TILLERSON: Well, first I’d say if anyone has earned the right to express their views, Senator McCain has, and I have great respect for the senator.

I think the point that I was making, Chuck, in that message to State Department employees is an important one to understand, and that’s that America’s values of freedom, of treatment of people, human dignity, freedom of expression throughout the world – those are our values. Those are enduring values. They are part of everything we do. And in fact, they serve as the guidepost and they serve as the boundaries as we develop our foreign policy approaches and our diplomatic efforts.

But I make a distinction between values and policy. A policy has to be tailored to the individual situation, to the country, to its circumstances, to the broader issues that we are addressing in terms of advancing our national security interest, our national economic interest. And so policies have to be adaptable. They have to change. They have to adjust to conditions. But our values can never change. Our values can never be put in a position of having to be compromised. And so the values guide our policy; but if we put our values in the front of our policies and say this is our policy, we have no room to adapt to changing circumstances to achieve our ultimate objective. And I think if we are successful in achieving our ultimate diplomatic and national security objectives, we will create the conditions for the advancement of freedom in countries all over the world.

QUESTION: Secretary Tillerson, I know you’re busy and you’ve got to get going. You’ve got this big trip ahead of you. Thank you for spending some time with us. I appreciate it.

SECRETARY TILLERSON: Thanks, Chuck. And I want to wish all the mothers a Happy Mother Day, most particularly my own mother, my wife, and my two daughter-in-laws, the mothers of my grandchildren. Thank you, Chuck.

QUESTION: A great message to send. Thank you, sir.

By the way, Secretary Tillerson also indicated in our interview that any decision to move the U.S. embassy in Israel to Jerusalem would not be made for some time. We also had a trip preview. You can see a lot more of this interview on our website, meetthepress.com