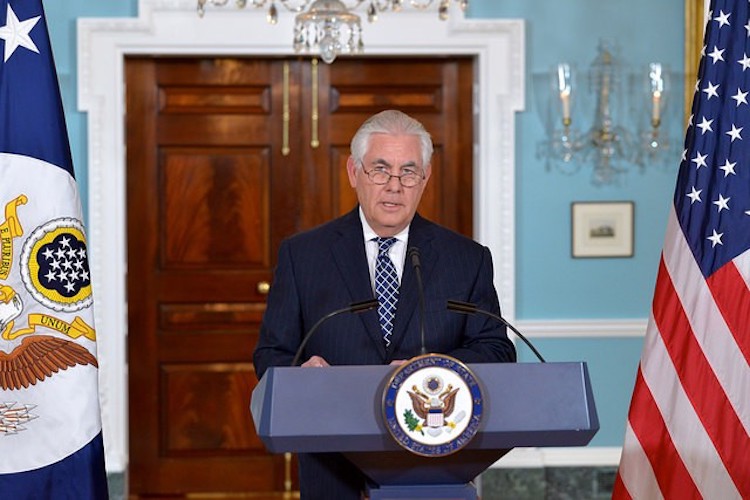 SECRETARY TILLERSON: Good afternoon, all. The Trump administration is currently conducting across the entire government a review of our Iran policy.

Today I’d like to address Iran’s alarming and ongoing provocations that export terror and violence, destabilizing more than one country at a time.

Iran is the world’s leading state sponsor of terrorism and is responsible for intensifying multiple conflicts and undermining U.S. interests in countries such as Syria, Yemen, Iraq, and Lebanon, and continuing to support attacks against Israel.

An unchecked Iran has the potential to travel the same path as North Korea, and take the world along with it.

The United States is keen to avoid a second piece of evidence that strategic patience is a failed approach.

A comprehensive Iran policy requires that we address all of the threats posed by Iran, and it is clear there are many.

Iran continues to support the brutal Assad regime in Syria, prolonging a conflict that has killed approximately half a million Syrians and displaced millions more. Iran supports the Assad regime, even as it commits atrocities against its own people, including with chemical weapons. Iran provides arms, financing, and training, and funnels foreign fighters into Syria. It has also sent members of the Iran Revolutionary Guard to take part in direct combat operations.

In Iraq, Iran provides support to some Iraqi militant groups, primarily through the Qods Force, which has been undermining security in Iraq for years.

Iran maintains a longstanding hostility towards Israel, providing weapons, training, and funding to Hamas and other Palestinian terrorist organizations.

In deed and in propaganda, Iran foments discord.

Just yesterday, the regime reportedly exhibited a missile marked “Death to Israel” during a military parade.

In Yemen, Iran continues to support the Houthis’ attempted overthrow of the government by providing military equipment, funding, and training, thus threatening Saudi Arabia’s southern border. Interdictions by Emirati forces in Yemen and coalition forces in the Arabian Sea have revealed a complex Iranian network to arm and equip the Houthis.

Iranian naval vessels continue to undermine freedom of navigation in the Persian Gulf by harassing U.S. naval vessels that are operating lawfully.

Iran has conducted cyber-attacks against the United States and our Gulf partners.

Iran has been behind terrorist attacks throughout the rest of the world, including a plot to kill Adel al-Jubeir, who was then the Saudi ambassador to the United States.

Whether it be assassination attempts, support of weapons of mass destruction, deploying destabilizing militias, Iran spends its treasure and time disrupting peace.

Iran continues to have one of the world’s worst human rights records; political opponents are regularly jailed or executed, reaching the agonizing low point of executing juveniles and individuals whose punishment is not proportionate to their crime.

Apart from the abuses inside Iran’s own borders, it is the threat it poses to the rest of the world.

Iran’s nuclear ambitions are a grave risk to international peace and security.

It is their habit and posture to use whatever resources they have available to unsettle people and nations.

With its latest test of a medium-range ballistic missile, Iran’s continued development and proliferation of missile technology is in defiance of UN Security Council Resolution 2231.

And it has previously stated it will conduct a second test flight of the Simorgh space-launch vehicle, which would put it closer to an operational intercontinental ballistic missile.

Any discussion of Iran is incomplete without mentioning the JCPOA.

The JCPOA fails to achieve the objective of a non-nuclear Iran; it only delays their goal of becoming a nuclear state. This deal represents the same failed approach of the past that brought us to the current imminent threat we face from North Korea. The Trump administration has no intention of passing the buck to a future administration on Iran.

The evidence is clear. Iran’s provocative actions threaten the United States, the region, and the world.

As I indicated at the beginning, the Trump administration is currently conducting a comprehensive review of our Iran policy. Once we have finalized our conclusions, we will meet the challenges Iran poses with clarity and conviction. Thank you.

QUESTION: Mr. Secretary, by your own letter to the Speaker of the House, Iran is complying with the terms of the nuclear deal. If you break out of that deal, won’t that send a signal to North Korea and other rogue nations that the U.S. can’t be trusted to keep its end of the bargain? And Iran is already being sanctioned for its terrorism, for its missile (inaudible) by the U.S. Is another option – one that many Republicans on the Hill have suggested – to increase those sanctions to punish Iran for those behaviors?

SECRETARY TILLERSON: Well, Andrea, I think it’s important in any conversation on the JCPOA – and I think this was one of the mistakes in how that agreement was put together, is that it completely ignored all of the other serious threats that Iran poses, and I just went through a few of those with you. And that’s why our view is that we have to look at Iran in a very comprehensive way in terms of the threat it poses in all areas, of the region and the world, and the JCPOA is just one element of that. And so we are going to review completely the JCPOA itself. As I said, it really does not achieve the objective. It is another example of buying off a power who has nuclear ambitions; we buy them off for a short period of time and then someone has to deal with it later. We just don’t —

QUESTION: So should we break out of it?

SECRETARY TILLERSON: We just don’t see that that’s a prudent way to be dealing with Iran, certainly not in the context of all of their other disruptive activities.

QUESTION: Mr. Secretary, you mentioned that the JCPOA is another example of a failed approach, likening it to strategic patience with North Korea. On North Korea, is there serious consideration being given to relisting it as a state sponsor of terrorism, something that was – a designation that was removed, in fact, by the Bush administration?

SECRETARY TILLERSON: We’re reviewing all of the status of North Korea, both in terms of state sponsorship of terrorism as well as all the other ways in which we can bring pressure to bear on the regime in Pyongyang to reengage, but reengage with us on a different footing than the past talks have been held. So yes, we are evaluating all of those options.

QUESTION: I mean, it’s – it sounds like you’re already calling —

QUESTION: Secretary, regarding Venezuela, the turmoil in Venezuela today —

QUESTION: — are you worried about the situation in the streets of Caracas and Venezuela?

SECRETARY TILLERSON: I’m sorry, I didn’t catch all your —

QUESTION: The situation – the situation in Venezuela. Today there is a turmoil, a lot of people on the streets of Venezuela, protesting against the government of Nicolas Maduro. Are you worried about the situation there?

SECRETARY TILLERSON: Well, we are concerned that the government of Maduro is violating its own constitution and is not allowing the opposition to have their voices heard, nor allowing them to organize in a way that expresses the views of the Venezuelan people. Yes, we are concerned about that situation. We’re watching it closely and working with others, particularly through the OAS, to communicate those concerns to them.

MODERATOR: Thank you, everybody. Thank you very much.