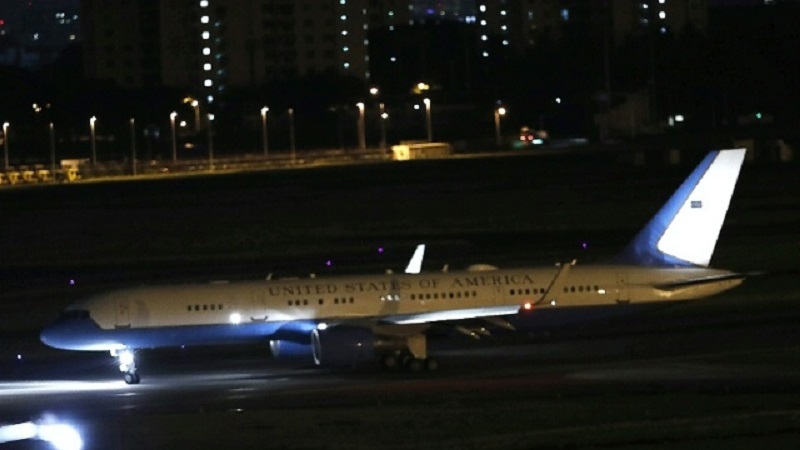 U.S. Department of State
Office of the Spokesperson
For Immediate Release
May 8, 2018

SECRETARY POMPEO: So the first time it was truly an intel effort, in that the South Koreans had made representations about things that North Korea was preparing to do that Kim Jong-un had told them, and we largely went there to validate that those were true so that it would make sense to begin to put in place the conditions for the President’s visit. So that was the primary mission. We achieved that. He gave us a little bit of color on that but not much more. So we set some of the basic outlines, some of the ground rules, and then we began the discussion as well on the administrative elements of it – what would it look like, how long would it last, where would it be, what time frame would make sense. So that was it. It was a limited diplomatic discussion. It was truly aimed at learning and listening, making sure we understood the outlines of what was at least possible.

There’s a second piece, which is we also want to make sure that we’re square about what it isn’t, what our expectations are not. And we are not going to head back down the path that we headed down before. We’re not going to relieve sanctions until such time as we achieved our objectives. We are not going to do this in small increments, where the world is essentially coerced into relieving economic pressure. That won’t lead to the outcome that I know Kim Jong-un wants and I know President Trump is demanding, so we’re hoping to set out that set of conditions that will give them this opportunity to have a historic, big change in the security relationship between North Korea and the United States, which will achieve what the President has tweeted about and talked about: complete, verifiable, irreversible denuclearization.

That’s the mission set. We’re trying to set out the conditions for that today. And this will be a part of that process. This will go on tomorrow. But we think it’s important. We think there’s enough that’s been discussed that it’s important for me to sit with senior North Korean leaders and try and make a big move towards making sure we’re prepared for the summit.

QUESTION: So are you expecting that you will be able to have a time, when – all that kind of stuff? I was just asking prior, before, so it’s —

SECRETARY POMPEO: It’s certainly my objective to do so.

QUESTION: Right. But the President says it’s been set, but then they said it hadn’t been set. So I mean, what, are you 99 percent certain about —

SECRETARY POMPEO: We think we have it figured out. We want to – we’d love to be able to walk away from here prepared to say yep, we now have the senior level, most senior leaders’ commitment to this date and this location. I – we’re going to work towards that.

QUESTION: Well, let me add to that. Does that – what you say is that you don’t have it yet?

SECRETARY POMPEO: I know the nuance is difficult.

SECRETARY POMPEO: We think we’re getting really close to having all the parties agreeing to – it’s not just even – a date and time is important —

SECRETARY POMPEO: And the location is important. But there are many conditions that play into that. How long is it going to go on? When you say where, like really where? Not just a city or a country, but like really where. So we’re trying to put some more meat on that – on the answer to that.

QUESTION: Will you be meeting with Kim Jong-un himself, do you expect?

SECRETARY POMPEO: I don’t know. We’re going to meet with the most senior leaders. The last time I traveled I did. We’re prepared to meet with anyone who is speaking on behalf of the North Korean Government and can give us solid answers so we’re prepared.

QUESTION: How important is it that – would it be for them to release the prisoners?

QUESTION: How significant is —

SECRETARY POMPEO: We have been asking for the release of these detainees for – this administration for 17 months. We’ll talk about it again today. I think it’d be a great gesture if they would choose to do so.

QUESTION: Can you have a summit if you – if they’re still holding three Americans?

SECRETARY POMPEO: We’re hopeful we don’t have to cross that road.

MS NAUERT: All right. The Secretary has to go.

QUESTION: Do you expect to bring them out?