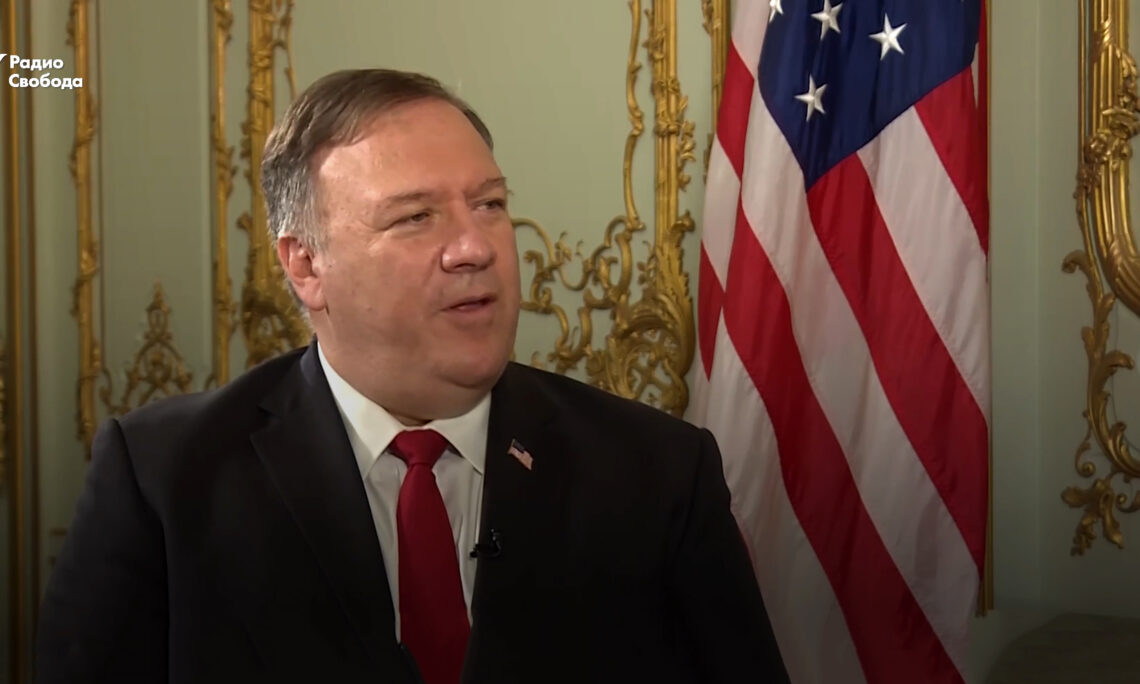 QUESTION: You have condemned the conduct of the elections in Belarus and you’ve also condemned the violence from security forces that has followed those elections. But what does this mean for the future of U.S.-Belarus relations, in particular relating to two things: deliveries of U.S. oil to Belarus and the dispatching the U.S. ambassador to Minsk?

SECRETARY POMPEO: Well, we’re going to have to work through that. As you said, we were incredibly troubled by the election and deeply disappointed that it wasn’t more free and more fair. We’ve seen this behavior before, and we regret that this is how it’s transpired. Then we’ve watched the violence and the aftermath, peaceful protesters being treated in ways that are inconsistent with how they should be treated.

We haven’t settled out what the appropriate response is, but I can tell you this: We’ll work with our European friends, our freedom-loving friends here who are equally concerned about what took place. We want good outcomes for the Belarusian people and we’ll take actions consistent with that.

QUESTION: There is talk of sanctions within the European Union. When you come to sit and think about the measures, will you also consider sanctions? Will you consider stopping the oil shipments?

SECRETARY POMPEO: Oh, I’m sure we’ll look at each of these things, and the important thing to note is the criteria. What is it that we believe that we can do, not just the United States unilaterally, but in a multilateral way to deliver good outcomes for the Belarusian people, whether that turns out to be sanctions or turns out to be making decisions about product deliveries? Those are all things that are yet to be determined. We’re still pretty fresh off this election and we need to see how things settle out here in the near future.

QUESTION: Okay. Let’s turn to Iran. The United States is going to be bringing a motion in the UN Security Council this week to extend the arms embargo. It’s widely expected that Russia and China will veto that motion. And then the talk is that you’re looking at triggering the snapback mechanism in the Iran nuclear deal to reimpose UN sanctions on Iran, which have been lifted as part of the deal. But it does seem that you’re going to encounter some resistance towards doing that, doesn’t it?

SECRETARY POMPEO: Well, here’s what’s important: I’m here in the Czech Republic today. Iran poses a real threat to Europe. We’ve seen the kind of campaigns they have conducted here, we’ve seen the risk of assassination plots, we’ve seen prosecutions for that throughout Europe. It makes no sense for any European country to support the Iranians being able to have arms. It doesn’t make any sense.

So we have this expiration. It’s on October 18th. Our previous administration in America signed off on that. We regret that. But the world now needs to unite.

QUESTION: But it’s not uniting, is it?

SECRETARY POMPEO: Iran – well, Iran is the world’s largest state sponsor of terror, and so —

QUESTION: Sure, but your European allies see it differently, don’t they?

SECRETARY POMPEO: No, I don’t think they do. I think they recognize it for exactly what it is (inaudible) and I hope that they will vote that way at the United Nations. I hope they will see that the —

SECRETARY POMPEO: — resolution that we’re going to present is simply asking for a rollover of the extension of the arms embargo. It’s that straightforward.

SECRETARY POMPEO: We’re determined to make sure that happens.

QUESTION: And you’re not expecting a clash with your European partners on this?

SECRETARY POMPEO: We are – we know they too share our concerns about Iran having weapons. They have an easy way to make sure that Iran cannot buy and sell weapons: Vote yes at the UN Security Council and Iran will continue to be prohibited from having those weapons. It’s that straightforward.

QUESTION: Well, not if the Russians and Chinese veto the motion.

SECRETARY POMPEO: We can all go to the Security Council under 2231. The United States, the Brits, the French can all do that and make sure this doesn’t happen. There’s a provision in 2231 that permits it. The United States is determined to make sure that we don’t – I mean, look at the countries closest to it. Look at the Arab countries. They’re all in support of the arms embargo extension. Look at Israel. They’re in support of it. Why?

QUESTION: But if it’s vetoed —

QUESTION: But if it’s vetoed, where does that leave you?

SECRETARY POMPEO: We’re going to make it come back. We have the right to do it under 2231 and we’re going to do it.

QUESTION: Okay. A question I wanted to ask you was related to Russia about its foreign agent law, and it relates directly to Radio Free Europe/Radio Liberty and also to Voice of America. Russia is using the law to impose severe restrictions on the way we operate in Russia, and this is something that you have condemned very forcefully, and yet Russia doesn’t seem to be backing down. So what might you do now in order to ensure that we can continue to work and operate in Russia?

SECRETARY POMPEO: I never get out in front of decisions that we make, but we have been watching this closely. As you’ve said, we’ve condemned it. We’ve also imposed enormous sanctions on Russia for other elements of their malign activity. We’re continuing to look at this. We hope that the rest of the world will join us in this. We hope that those nations that value the freedom of press, who want independent reporters to be able to ask questions even if sometimes leaders don’t like them, will join with us. We think we can put real pressure and convince them that the right thing to do is to allow press freedom. We know that that hasn’t been the case historically, but it’s something we continue to press for, continue to work on, and continue to work with our partners, like the people at Radio Free Europe and Radio Free Liberty, to get the message out to say all we simply are asking for is the right for the people of Russia and the people of the world to have access to information that is true and real and timely.

QUESTION: Okay. Russia’s not so far looking like it’s getting that message. Russia has also reportedly, according to U.S. intelligence reports, been offering bounties to the Taliban and their proxies in Afghanistan to kill American soldiers. You are reported to have discussed this with your Russian counterpart, Sergey Lavrov. I wonder, do you believe those reports, first of all?

SECRETARY POMPEO: I never comment on U.S. intelligence matters, even if some reporter has decided that they think they know what’s really going on.

What we’ve said is this: If the Russians are offering money to kill Americans or, for that matter, other Westerners as well, there will be an enormous price to pay. That’s what I shared with Foreign Minister Lavrov. I know our military has talked to their senior leaders as well. We won’t brook that; we won’t tolerate that.

QUESTION: So you said that to Sergey Lavrov. So you think this is at least credible, this information?

SECRETARY POMPEO: We’ve made clear we know the history, we know that the Russians have armed the Taliban in the past, right. We know that the Iranians continue to arm them today. So we know these facts. We’ve made clear to each of them our expectations, and we will do everything we need to do to protect and defend every American soldier and, for that matter, every soldier from the Czech Republic or any other country that’s part of the Resolute Support Mission to make sure that they’re safe. We have done that. We did it last year, we’ll do it again this year, and we’ll do it so long as we have soldiers in Afghanistan.

QUESTION: President Trump in a recent interview said that prior to telephone conversations he had with Vladimir Putin that he was not briefed on this. Should he not have been?

SECRETARY POMPEO: I’ll leave to the White House their discussions about the things the President was briefed on or not. I can assure you of this, this much I’ve seen: President Trump has in every case that any one of his national security team has come to him to say, “Sir, we’ve got a concern we’re not doing enough here, we can do more here, here’s another risk,” the President has taken that on board seriously and we have responded in a way that is not only completely appropriate, but it’s kept our people safe.

QUESTION: But this is —

QUESTION: In some of the countries we broadcast to, they’re pretty authoritarian countries, and America’s criticism of what’s going on there is taken seriously. America’s handling of protests in America on its home turf this year have led to some people commenting that – when they see, for example, unmarked vehicles picking people up off the streets of Portland – that this takes away from America’s moral authority to tell authoritarian regimes they’re behaving badly. Does it harm America’s image?

SECRETARY POMPEO: Even your question is insulting. The difference between the United States and these authoritarian regimes couldn’t be more clear. We have the rule of law, we have the freedom of press. Every one of those people gets due process. When we have peaceful protesters, we create the space for them to say their mind, to speak their piece. Contrast that with what happens in an authoritarian regime. To even begin to compare them, to somehow suggest that America’s moral authority is challenged by the amazing work that our police forces, our law enforcement people do all across America – I frankly just find the question itself incomprehensible and insulting.