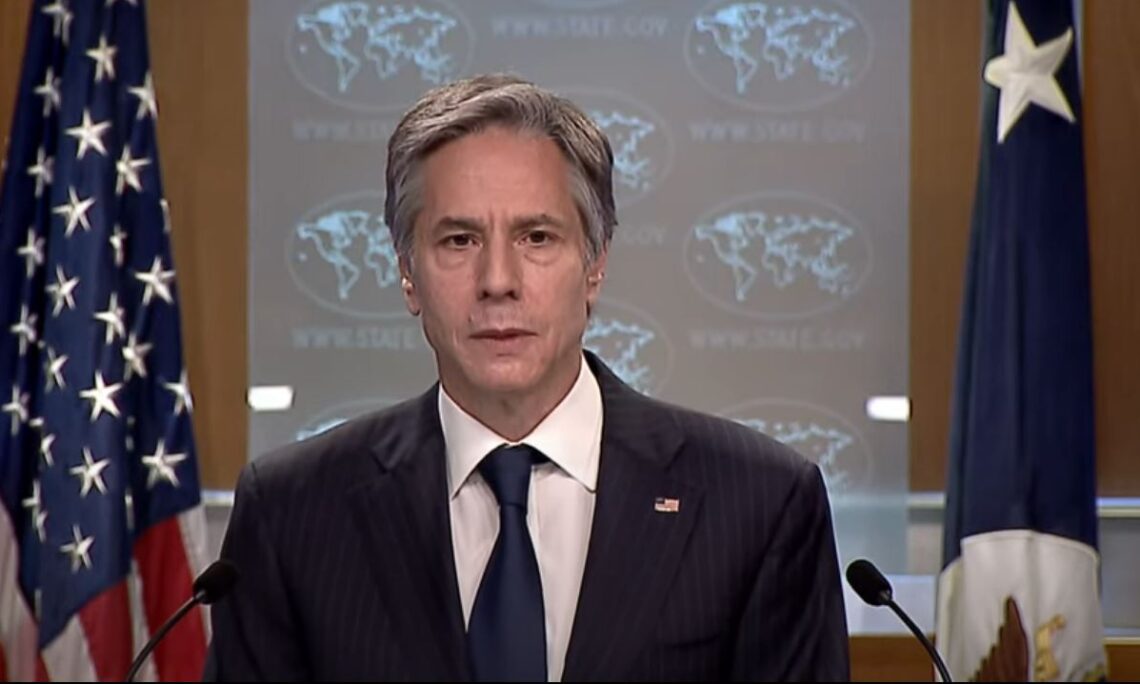 MR PRICE:  Good morning, everyone, and thank you for joining us today.  I’m very pleased to have the opportunity to introduce Secretary Blinken, who will speak to the Department’s International Religious Freedom Report.  We will then hear from Office of International Religious Freedom senior official Dan Nadel, who will be happy to take your questions on this year’s report.

Without further ado, I will turn it over to Secretary Blinken.

SECRETARY BLINKEN:  Ned, thank you very much.  Good morning, everyone.  So let me start, first of all, by wishing everyone a good morning, and Eid Mubarak to all who are celebrating.

Before talking about the report, I want to just take a minute to discuss what is happening in Israel, the West Bank, and Gaza.  We’re deeply concerned about what we’re seeing there.  Images that came out overnight are harrowing and the loss of any civilian life is a tragedy.  I’ve asked Deputy Assistant Secretary of State Hady Amr to go to the region immediately to meet with Israeli and Palestinian leaders.  He will bring to bear his decades of experience and, in particular, he will urge on my behalf and on behalf of President Biden a de-escalation of violence.  We are very focused on this.

The United States remains committed to a two-state solution.  This violence takes us further away from that goal.  We fully support Israel’s legitimate right to defend itself.  We’ve condemned and I condemn again the rocket attacks in the strongest possible terms.  We believe Palestinians and Israelis equally deserve to live with safety and security and we’ll continue to engage with Israelis, Palestinians, and other regional partners to urge de-escalation and to bring calm.

Now, let me turn back to what brings us together this morning, and that is the report.  Today, the State Department is releasing the 2020 International Religious Freedom Report.  We’ve produced this document every year for 23 years.  It offers a comprehensive review of the state of religious freedom in nearly 200 countries and territories around the world, and it reflects the collective effort of literally hundreds of American diplomats around the world and our Office of International Religious Freedom here in Washington, led by Dan Nadel, and he’ll be taking some questions from you today on the report.

Let me just say a few words about why this report matters.  Religious freedom is a human right; in fact, it goes to the heart of what it means to be human – to think freely, to follow our conscience, to change our beliefs if our hearts and minds lead us to do so, to express those beliefs in public and in private.  This freedom is enshrined in the Universal Declaration of Human Rights.  It’s also part of the First Amendment to the U.S. Constitution.  Our country’s commitment to defending freedom of religion and belief goes back centuries.  It continues today.

As this year’s International Religious Freedom Report indicates, for many people around the world this right is still out of reach.  In fact, according to the Pew Research Center, 56 countries, encompassing a significant majority of the world’s people, have high or severe restrictions on religious freedom.

In Burma, the military coup leaders are among those responsible for ethnic cleansing and other atrocities against Rohingya, most of whom are Muslim, and other religious and ethnic minorities around the world.

In Russia, authorities continue to harass, detain, and seize property of Jehovah’s Witnesses as well as members of Muslim minority groups on the pretense of alleged extremism.

In Nigeria, courts continue to convict people of blasphemy, sentencing them to long-term imprisonment or even death.  Yet the government has still not brought anyone to justice for the military’s massacre of hundreds of Shia Muslims in 2015.

Saudi Arabia remains the only country in the world without a Christian church, though there are more than a million Christians living in Saudi Arabia.  And authorities continue to jail human rights activists like Raif Badawi, who was sentenced in 2014 to a decade in prison and a thousand lashes for speaking about his beliefs.

And China broadly criminalizes religious expression and continues to commit crimes against humanity and genocide against Muslim Uyghurs and members of other religious and ethnic minority groups.

Today, I’m announcing the designation of Yu Hui, former office director of the so-called Central Leading Group Preventing and Dealing with Heretical Religions, of Chengdu, for his involvement in gross violations of human rights, namely, the arbitrary detention of Falun Gong practitioners.  Yu Hui and his family are now ineligible for entry into the United States.

I could go on; the examples are far too numerous.

More broadly, we’re seeing anti-Semitism on the rise worldwide, including here in the United States as well as across Europe.  It’s a dangerous ideology that history has shown is often linked with violence.  We must vigorously oppose it wherever it occurs.

Anti-Muslim hatred is still widespread in many countries, and this, too, is a serious problem for the United States as well as in Europe.

We have work to do to ensure that people of all faiths and backgrounds are treated with equal dignity and respect.

As this report notes, some countries have taken positive steps forward, and that, too, deserves comment.  Last year, the civilian-led transitional government in Sudan repealed apostasy laws and public order laws that had been used to harass members of religious minority groups.  Uzbekistan’s government has released hundreds of people who have been imprisoned because of their beliefs.  Just this past Saturday, Turkmenistan released 16 Jehovah’s Witnesses who are conscientious objectors and refused to serve in the military.  We understand the authorities will now offer conscientious objectors alternative ways to meet national service requirements.

We want to see more progress like that, and so our promise to the world is that the Biden-Harris administration will protect and defend religious freedom around the world.  We will maintain America’s longstanding leadership on this issue.  We’re grateful for our partners, including likeminded governments, the UN Human Rights Council, and networks like the International Religious Freedom of Belief Alliance and the International Contact Group of Freedom of Religion or Belief.  We’ll continue to work closely with civil society organizations, including human rights advocates and religious communities, to combat all forms of religiously motivated hatred and discrimination around the world.

Thank you very, very much and we look forward to being able to get into the report in more detail.  I’ll take a couple of questions before I take off.

QUESTION:  Thank you, Secretary Blinken.  It’s now clear that your calls for de-escalation haven’t been heard or at least haven’t been enough to stop it until now.  We’re now beyond an escalation.  Why are you just sticking to these calls to de-escalation and restraint?  What can you do further and to prevent a full-out, full-scale war?  And also, have you personally talked or tried to talk to the Palestinian leadership, to President Abbas or others?  And if not, why?  And who on the U.S. side has been in touch with whom on the Palestinian side?  Thank you.

SECRETARY BLINKEN:  Yeah, thank you.  A few things that are I think very important here.  We are deeply engaged across the board – the State Department, the White House, senior officials – with the Israelis, with Palestinians, with other countries and partners in the region to call for and push for de-escalation.  To be very clear, again, we strongly condemn the rocket attacks coming out of Gaza that are targeting innocent Israeli civilians, and Israel has a right to defend itself.  Palestinians have a right to live in safety and security, and the most important thing going forward now is to take down the violence, to de-escalate, and that’s exactly what we’re working toward.

Jake Sullivan, the National Security Advisor, has been engaged with his counterpart; I’ve talked to Foreign Minister Ashkenazi; Wendy Sherman, the deputy secretary of state, has been engaged as well; and as I mentioned just a short while ago, we are sending our senior official responsible for Israeli and Palestinian affairs to the region.  We’ve been engaged with all parties, including the Palestinians, and that will continue.  But the most important thing now is for all sides to cease the violence, to de-escalate, and to try to move to calm.

QUESTION:  Thank you for doing this, Secretary.  Beyond engagement and calls for de-escalation, I just want to reiterate:  Is there anything more that the U.S. can do at this point?

And my second question is:  More than 50 people have been killed in Gaza, including more than a dozen children.  So given those casualties, do you think the Israeli response has been proportional?

SECRETARY BLINKEN:  So first, in terms of what we’re doing, the most important thing that we can do right now is exactly what we’re doing, which is to be engaged across the board and pushing on de-escalation not only with Israelis and Palestinians but also with other partners who are amplifying our voice.  And as I said, we’re sending a senior diplomat to the region to work on this, so that – I think that piece is very important and our voice, our diplomacy from senior officials across the administration, I hope will help have an impact.

There is first a very clear and absolute distinction between a terrorist organization, Hamas, that is indiscriminately raining down rockets – in fact, targeting civilians – and Israel’s response defending itself that is targeting the terrorists who are raining down rockets on Israel.  But whenever we see civilian casualties, and particularly when we see children caught in the crossfire losing their lives, that has a powerful impact.  And I think Israel has an extra burden in trying to do everything it possibly can to avoid civilian casualties, even as it is rightfully responding in defense of its people.  And as I said, the Palestinian people have the right to safety and security, and we have to I think all work in that direction.

So the single most important thing right now is de-escalation.  We will continue to carry that message to our partners and to – in Israel, to the Palestinians, and to partners in the region.  Thanks very much.