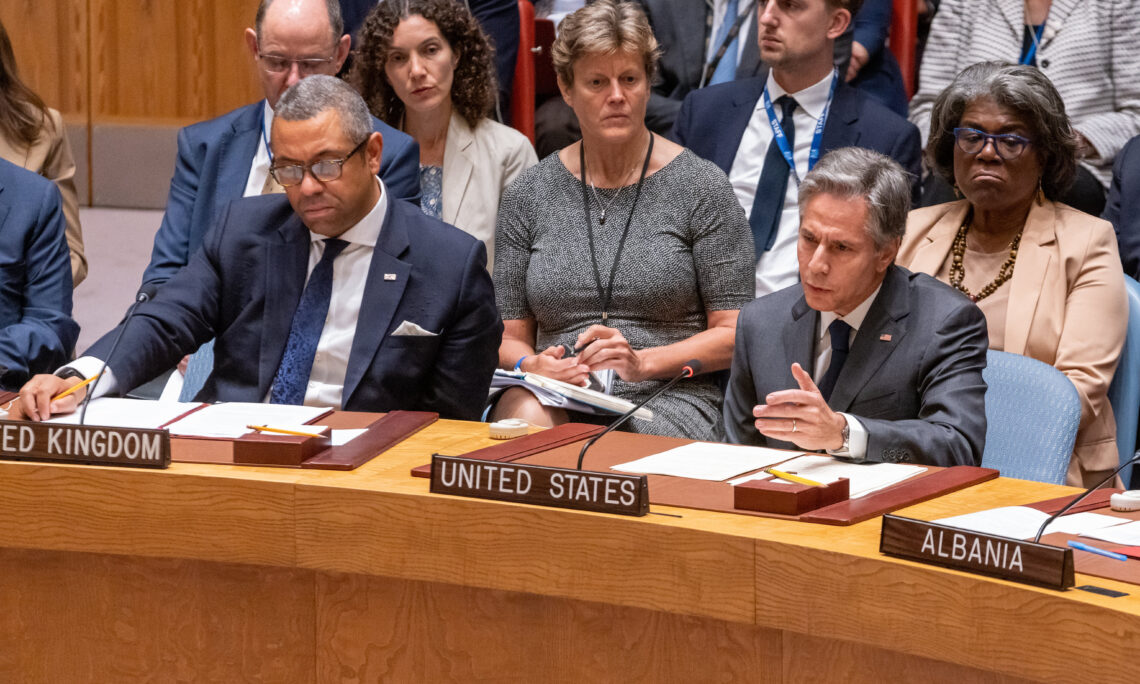 SECRETARY BLINKEN: (Via interpreter) Thank you very much, Madam President, for having brought this council together at this very grave moment of the crisis of the war of Russia on Ukraine.

(In English) Mr. Secretary General, thank you for your determination and the moral clarity that you’ve brought to ending this brutal war and defending the UN’s core principles, and also for your personal engagement in securing the vital Black Sea route for grain to flow once again from Ukraine.

Mr. Khan, we’re grateful for the efforts of the Office of the Prosecutor to investigate objectively and professionally the atrocities being committed in Ukraine by Russian forces, and for its support for – and coordination with – Ukrainian investigators and prosecutors.

We hear a lot about the divisions among countries at the United Nations. But recently, what is striking is the remarkable unity among member-states when it comes to Russia’s war on Ukraine. Leaders from countries developing and developed, big and small, north and south have spoken in the General Assembly about the consequences of this war and the need to end it. And they’ve called on all of us to reaffirm our commitment to the UN Charter and its core principles, including sovereignty, territorial integrity, human rights.

Even a number of nations that maintain close ties with Moscow have said publicly that they have serious questions and concerns about President Putin’s ongoing invasion.

Rather than change course, however, President Putin has doubled down – choosing not to end the war but to expand it; not to pull troops back but to call 300,000 additional troops up; not to ease tensions but to escalate them through the threat of nuclear weapons; not to work toward a diplomatic solution but to render such a solution impossible by seeking to annex more Ukrainian territory through sham referenda.

That President Putin picked this week, as most of the world gathers at the United Nations, to add fuel to the fire that he started, shows his utter contempt for the UN Charter, for the General Assembly, and for this council.

The very international order that we have gathered here to uphold is being shredded before our eyes. We cannot – we will not – allow President Putin to get away with it.

Defending Ukraine’s sovereignty and territorial integrity is about much more than standing up for one nation’s right to choose its own path, fundamental as that right is. It’s also about protecting an international order where no nation can redraw the borders of another by force.

If we fail to defend this principle when the Kremlin is so flagrantly violating it, we send a message to aggressors everywhere that they can ignore it, too. We put every country at risk. We open the door to a less secure, a less peaceful world.

We see what that world looks like in the parts of Ukraine controlled by Russian forces. Wherever the Russian tide recedes, we discover the horror that’s left in its wake.

I had a window into that horror myself when I traveled to Irpin just a few weeks ago to meet with the Ukrainian investigators who are compiling evidence of war crimes committed there. I saw up close the gaping holes left in residential buildings by Russian shelling – indiscriminate at best, intentional at worst.

As we assemble here, Ukrainian and international investigators continue to exhume bodies outside of Izyum, a city Russian forces controlled for six months before they were driven out by a Ukrainian counteroffensive. One site contains some 440 unmarked graves. A number of the bodies unearthed there so far reportedly show signs of torture, including one victim with broken arms and a rope around his neck.

Survivors’ accounts are also emerging, including a man who described being tortured by Russian forces for a dozen days, during which his interrogators repeatedly electrocuted him and, in his words, and I quote, “beat me to the point where I didn’t feel anything,” end quote.

These are not the acts of rogue units. They fit a clear pattern across the territory controlled by Russian forces.

This is one of the many reasons that we support a range of national and international efforts to collect and examine the mounting evidence of war crimes in Ukraine. We must hold the perpetrators accountable for these crimes.

It’s also one of the reasons why more than 40 nations have come together to help the Ukrainian people defend themselves, a right that is enshrined in Article 51 of the United Nations Charter.

The more setbacks Russian forces endure on the battlefield, the greater the pain they are inflicting on Ukrainian civilians. Russian attacks on dams, on bridges, on power stations, on hospitals, on other civilian infrastructure are increasing, constituting a brazen violation of international humanitarian law.

This week, President Putin said that Russia would not hesitate to use, and I quote, “all weapons systems available,” end quote, in response to a threat to its territorial integrity, a threat that is all the more menacing given Russia’s intention to annex large swaths of Ukraine in the days ahead. When that’s complete, we can expect President Putin will claim any Ukrainian effort to liberate this land as an attack on so-called “Russian territory.”

This from a country that in January of this year, in this place, joined other permanent members of the Security Council in signing a statement affirming that, and I quote, “nuclear war can never be won and must never be fought.” Yet another example of how Russia violates the commitments it’s made before this body, and yet another reason why nobody should take Russia at its word today.

Every council member should send a clear message that these reckless nuclear threats must stop immediately.

Russia’s effort to annex more Ukrainian territory is another dangerous escalation, as well as a repudiation of diplomacy.

It is even more alarming when coupled with the filtration operation that Russian forces have been carrying out across parts of Ukraine that they control. Now, this is a diabolical strategy, violently uprooting thousands of Ukrainians, bus in Russians to replace them, call a vote, manipulate the results to show near unanimous support for joining the Russian Federation. This is right out of the Crimea playbook.

As with Crimea, it’s imperative that every member of this council, and for that matter, every member of the United Nations reject the sham referenda and unequivocally declare that all Ukrainian territory is and will remain part of Ukraine, and no Russian claim to annex territory can take away Ukraine’s right to defend its own land.

Putin’s invasion is also distracting this council – in fact, the entire UN system – from working on the serious issues that we all want to focus on. Like preventing a climate catastrophe, aiding tens of millions of people on the brink of famine, fulfilling the 2030 Agenda for Sustainable Development, shoring up our interconnected health security – all issues that make a tangible difference in the lives of the citizens that we are here to represent, and that they are looking to us – looking to us to deliver on.

The overwhelming majority of UN member-states are committed to working together on these issues, and our actions show that.

Yet while more than a hundred countries have signed on to a roadmap to provide food aid to those who need it, and partners across Africa, Asia, the Americas, and Europe are working together to increase the resilience of global food systems, Russia for months blocked the export of Ukrainian grain to the world, until the United Nations and Turkey secured a deal to let the grain go. And Russia continues to bomb and seize Ukrainian farms and silos, line its wheat fields with landmines, raising the cost of food for people everywhere.

And while governments around the world are teaming up with international organizations, with the private sector, with philanthropies to end this pandemic and make sure that we’re better prepared for the next one, Russia is spreading misinformation and disinformation about WHO-approved vaccines – fueling vaccine hesitancy that puts people in all our countries at greater risk.

Here is the reality: None of us chose this war. Not the Ukrainians, who knew the crushing toll it would take. Not the United States, which warned that it was coming and worked to prevent it. Not the vast majority of countries at the United Nations.

And neither did our people, or the people of virtually every UN member-state, who are feeling the war’s consequences in greater food insecurity and higher energy prices.

Nor did the Russian mothers and fathers whose children are being sent off to fight and die in this war, or the Russian citizens who continue to risk their freedom to protest against it, including those who came out into the streets of Moscow after President Putin announced his mobilization to chant, “Let our children live!”

Indeed, it must be asked: How has this aggression against Ukraine by President Putin improved the lives or prospects of a single Russian citizen?

One man chose this war. One man can end it.

That’s why we will continue to support Ukraine as it defends itself, and strengthen its hand to achieve a diplomatic solution on just terms at a negotiating table. As President Zelenskyy has said repeatedly, diplomacy is the only way to end this war. But diplomacy cannot and must not be used as a cudgel to impose on Ukraine a settlement that cuts against the UN Charter, or rewards Russia for violating it.

President Putin is making his choice. Now it’s up to all of our countries to make ours.

“We the people[s] of the United Nations determined…” That is how the preamble of the UN Charter starts. Let’s not forget that “we the peoples” still get to choose the fate of this institution and our world. The stakes are clear. The choice is ours. Let’s make the right choice for the world that we want and that our people so desperately deserve. Thank you.