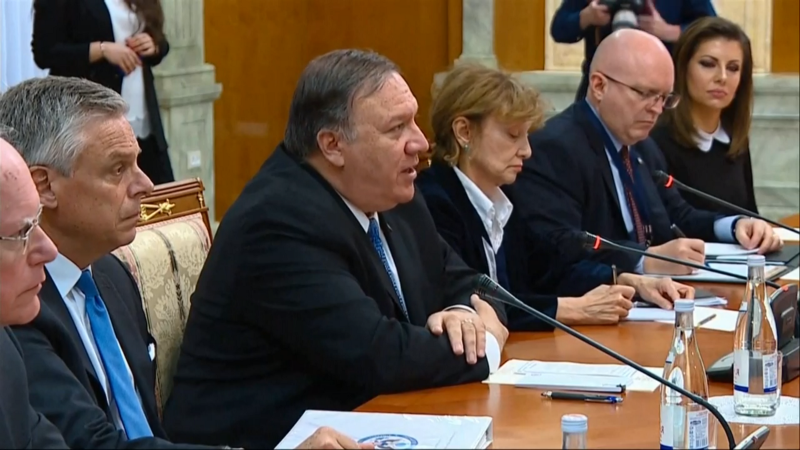 We had a chance to hold the discussion on the 6th of May, when we had our negotiations in Finland on the margins of the Arctic Council. We covered and we had an exchange of opinions on the international agenda and several bilateral issues. And I hope that today we’ll have a chance to discover them and to discuss them in more detail.

I hope that we’ll be able to come up with specifics of ways how to get U.S.-Russian relations out of that regrettable state that they happen to be, due to several objective and subjective reasons involved, considering that this is the task, the instructions coming from our presidents that was confirmed during the Helsinki summit, as well as in their conversation on the 3rd of May.

We have multiple issues that require both urgent methods as well as long-term, sustainable solutions.

That has to do with the situation in strategic stability sphere, as well as more efficient ways to tackle terrorism, as well as finding solutions to different clashes in different regions of the world.

We see that there are certain suspicions and prejudice on both sides, but this is not a way for – have a win-win situation because that mistrust that we have hinders both your security and our security, and causes concern around the world.

I believe that it is time to build new, more constructive and responsible metrics of our relationship, of our mutual perception, and we are prepared to do that if our U.S. colleagues and counterparts readily support that. I believe that a requisite – an important requisite for success of our dialogue is to rebuild trust at all levels of our dialogue – in the highest level, at the working level, (inaudible). And considering that we have met over the past two weeks for two times, that’s a reason for some optimism. Let’s try it and see what happens.

SECRETARY POMPEO: Sergey, thank you for hosting me. I appreciate it. It’s great to see you again, twice in a couple weeks. I’m excited about that. And I know we’ll see you too (inaudible), we’ll have many more opportunities for conversation.

I’m here today because President Trump is committed to furthering this relationship. As I think you said, we have differences. We – each country will protect its own interests, look out for its own interests of its people. But – it’s not (inaudible) that we’re adversaries on every issue, and I hope that we can find places where we have a set of overlapping interests and can truly begin to build out strong relationships, at least in those particular – on those particular issues.

I’ve seen it myself. We worked closely with you on counterterrorism during my time and service in the Executive Branch very successfully. We’ve saved American lives, we’ve saved Russian lives, as we’ve (inaudible) good, honest, sincere work together. And I think on issues such as arms control and nuclear proliferation, we’ve talked about some of the regional conflicts and terrorism, I think there are spaces where we can get our teams and begin to build out a common set of understandings. I hope too that we can begin to build out our strategic security dialogue, as you and I spoke about when we were in Finland a couple weeks back.

And I hope this effort, I hope this good-faith effort on the part of each of our two nations, as directed by President Trump and President Putin, will stabilize the relationship and put it back on a trajectory that I think will be good for not only each of our two countries and each of our peoples, but for the world as well. I know we’ll have frank discussions, and I’m sure there will be places where we just can’t find common ground, but I look forward to our time together.