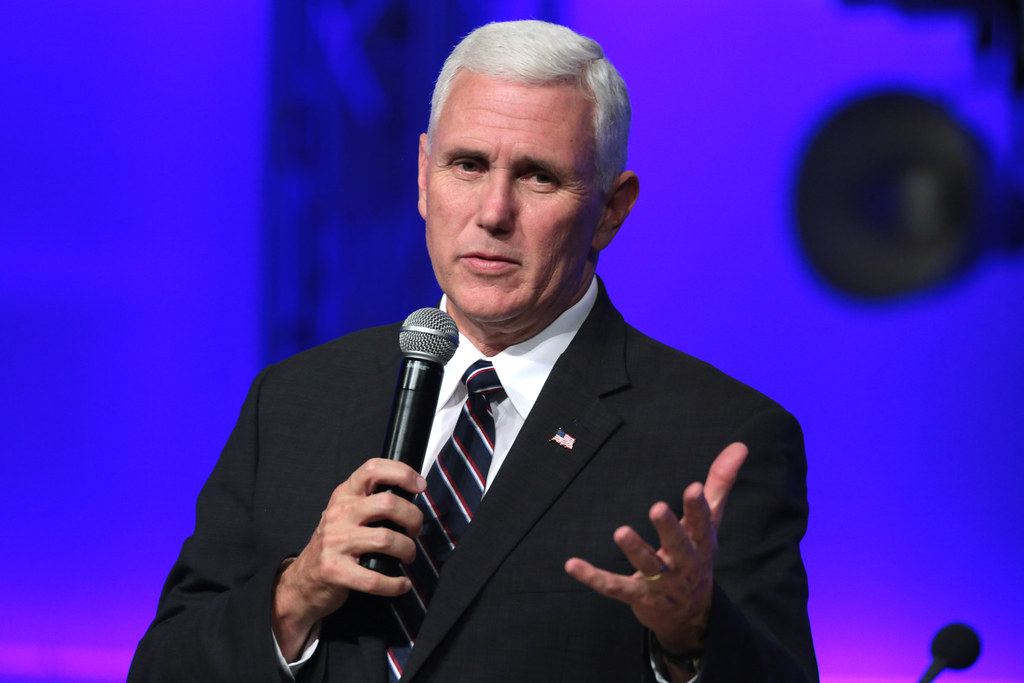 The White House
Office of the Vice President
For Immediate Release

Remarks by the Vice President to the Atlantic Council

THE VICE PRESIDENT: Thank you, all. Thank you, Ambassador Gray, for that kind introduction.

It truly is an honor to be with you tonight as the Atlantic Council celebrates so many distinguished leaders from North America and Europe, and from across the wider world. The Atlantic Council Distinguished Leadership Awards 2017 — thank you all for making this possible and for your warm welcome. (Applause.)

And I bring greetings tonight from the 45th President of the United States of America, President Donald Trump. (Applause.)

Now before I get started let me first and foremost, on the President’s behalf speak a word from the heart. Let me express the sorrow of our administration and all the American people for the horrific terrorist attack just two days against our cherished friend and beloved ally, the United Kingdom.

Our hearts break for the families of the victims and the injured in London. They are just the latest innocents to suffer at the hands of terrorists, joining those who died in Manchester, in Paris, in Istanbul, in Brussels, Berlin, San Bernardino, and too many other places — victims of barbaric acts of terrorism. They have our prayers, but more than that –our unwavering resolve.

And I want to speak not only for all the Americans gathered here but all of our friends from around the world, President Donald Trump will not relent until we protect the American people and our allies from the scourge of global terrorism.

But as you well know, this is a threat we must face together. Now is the time for NATO and this Transatlantic Alliance to stand united and stand strong in the face of global terrorism.

Our enemies seek to divide us so that they might defeat us. But our Alliance has faced far greater threats and emerged stronger and more secure and united as allies. I say with confidence and with faith we will drive the cancer of terrorism from the face of the Earth, and we will do so together. (Applause.)

So let me thank all of you in the Atlantic Council for hosting this important gathering. To President Fred Kempee, Chairman Jon Huntsman, all the Council’s leadership — thank you for your important work. For 56 years the Atlantic Council has drawn our continents closer together, and our President and the American people are grateful for more than half a century of work.

Let me also recognize the members of the Brzezinski family who are here with us tonight. Our thoughts and our prayers are with you. Mr. Brzezinski was a great man. And more important, he was a good man. And America will bear the imprint Zbigniew Brzezinki’s leadership for generations to come. (Applause.)

And let me join in the chorus of congratulations to all the recipients of this year’s award, many who I’ve had the privilege to know before and greatly admire like Admiral Michelle Howard, Her Royal Highness Haya Bint Al Hussein, Bill Ford, Jr., Renée Fleming.

And especially let me express my appreciation and congratulations to the winner of the Distinguished International Leadership Award who in the time that I met him in Brussels and the time he spent with the President at the White House and just recently overseas has demonstrated his role and his commitment to be an unfailing advocate for a stronger and more secure Transatlantic Alliance, NATO Secretary General Jens Stoltenberg. You have our congratulations and our thanks. (Applause.)

It is an honor also to be joined here this evening by the leader of the newest member of our Atlantic Alliance, Prime Minister Markovic of Montenegro. Congratulations to you and to the people of Montenegro on your accession to NATO. (Applause.)

I had the privilege of welcoming the Prime Minister to the White House today. We had a wonderful discussion. I was very humbled to be able to share a few moments with him on the very day that Montenegro became a member of the North Atlantic Treaty Organization.

So to Mr. Secretary General, Mr. Prime Minister, let me just say to each of those leaders that were represented in Brussels recently, President Trump so appreciated, as I do, the opportunity to meet with all of you and with NATO leaders in Brussels just a few weeks ago and over the last several months. It truly has marked this administration’s beginning of a relationship that I know will only strengthen the Alliance across the Atlantic in the months and years ahead. (Applause.)

Now the world saw firsthand just a few weeks ago, President Trump embracing his role and America’s role as leader of the free world. I know that under the President’s leadership, the United States’ leadership that I know our Alliance will grow stronger, our people will be safer, and freedom will march onward.

You know, it’s fitting that I’m here on June the 5th. This is actually a seminal day in the history of our transatlantic relationship.

Seventy years ago today, it’s amazing to think that George Marshall outlined his groundbreaking plan for the United States of America to partner with Europe to rebuild its economies after the ravages of World War Two, and to keep lit the flame of freedom on the continent where freedom was first kindled.

The Marshall Plan established the foundation of security and prosperity that reigns in Europe to this very day.

Two years later, it was on that foundation that we created the North Atlantic Treaty Organization, to provide for the collective defense and to protect all that we’ve built together.

And today, under President Donald Trump, let me assure you, the United States vows will continue to build — to reach new heights of prosperity and security — and we will continue to strengthen the bonds between our nation and the nations of Europe for the benefit of our peoples for generations to come. (Applause.)

As the world looked on, in his meeting with Secretary General Stoltenberg in April, President Trump reaffirmed the United States’ commitment to the NATO Alliance and to the enduring values that we proudly share.

And make no mistake: Our commitment is unwavering. We will meet our obligations to our people to provide for the collective defense of all our allies.

The United States is resolved, as we were at NATO’s founding and in every hour since, to live by that principle that an attack on one of us is an attack on us all. (Applause.)

Our unbreakable unity for freedom is our greatest strength. And a strong NATO is vitally important, especially in these trying times.

Only a few days ago, speaking at the unveiling of NATO’s beautiful Article 5 Memorial, President Trump evoked in his words the “courage of our people, the strength of our resolve, and the commitments that bind us together as one.” And this President called on us to rise together to confront in his words the “grave security concerns” that face our historic Alliance.

From Russia’s efforts to redraw international borders by force, to Iran’s attempts to destabilize the Middle East, to the global menace of terrorism that can strike anywhere, at any time — it seems that the world is more dangerous today than at any point since the fall of Communism a quarter century ago.

With the rise of adversaries new and old, our Alliance must continue to evolve to confront the threats of today and tomorrow, especially with where I began tonight, confronting the threat and the menace of terrorism.

To be clear: It should be “cause for alarm” to us all, that we need to deploy our military to protect our citizens going to a concert, watching a marathon, or simply taking a stroll on a Saturday night because that is not the way a free people should ever be forced to live. (Applause.)

Already our Alliance is taking vital steps to protect our citizens and hunt down the terrorists on our terms, on their soil.

NATO continues to play a leading role in equipping the government and people of Afghanistan to confront the threat of terror. Last week’s horrible mass-murder attack in Kabul only underscores the importance of our mission.

And in light of the President’s statement in Brussels that “the NATO of the future must include a great focus on terrorism,” I know it’s heartening to the President and to our administration to see that NATO will become a full member of the Global Campaign to Counter ISIS and play a greater role in our shared fight against terrorism.

But to most effectively confront the terrorist threat — and any other challenge, known or unknown, that faces our Alliance — we must all be prepared do our part, without exception.

It’s encouraging that our NATO allies committed in Brussels to develop national plans to fulfill their Wales commitment to spend 2 percent of their GDP on defense.

We’re grateful to those nations that have already taken concrete steps to increase their commitment to our common security. But we have a long way to go. And as the President said in Brussels, 2 percent should be considered “the bare minimum” in this time of widening challenges and unknowable threats.

And be confident of this, President Donald Trump will continue to work with Secretary General Stoltenberg and all our NATO allies to ensure that our Alliance has the resources and the capabilities it needs to accomplish its noble mission well into the 21st century. (Applause.)

And as we look toward the future, we cannot only look inward. NATO’s “Open Door” must always remain so, for those nations, like our newest ally Montenegro, that share our values, wish to contribute to the most successful alliance in history, and seek a brighter future of security and prosperity for our nations and the world, the door must remain open.

The truth is that NATO is as important today as it was at its founding nearly 70 years ago. We are bound together by the same timeless ideals — freedom, democracy, justice, and the rule of law.

We share a past — of shared sacrifice, and shared commitment — and after all we’ve been through, I know we share a future, too.

Today, tomorrow, and every day hence be confident that the United States is now and will always be Europe’s greatest ally.

Our devotion to this historic Alliance is unwavering and eternal. And together, we will go forth to meet that glorious future that awaits freedom-loving people.

One of my favorite quotes of Winston Churchill is actually carved into the wall of the narthex of the National Cathedral. It simply reads as follows. It’s words that he spoke before the Congress in a time of great challenge in the life of this nation. Prime Minister Churchill said, “He must indeed have a blind soul, who cannot see that some great purpose and design is being worked out here below, of which we have the honor to be the faithful servants.”

To all of us in this historic Transatlantic Alliance, to all the freedom-loving nations represented here, let us have that same faith, let us be the faithful servants of freedom, and let us rededicate ourselves to the preservation of this Alliance and all it stands for.