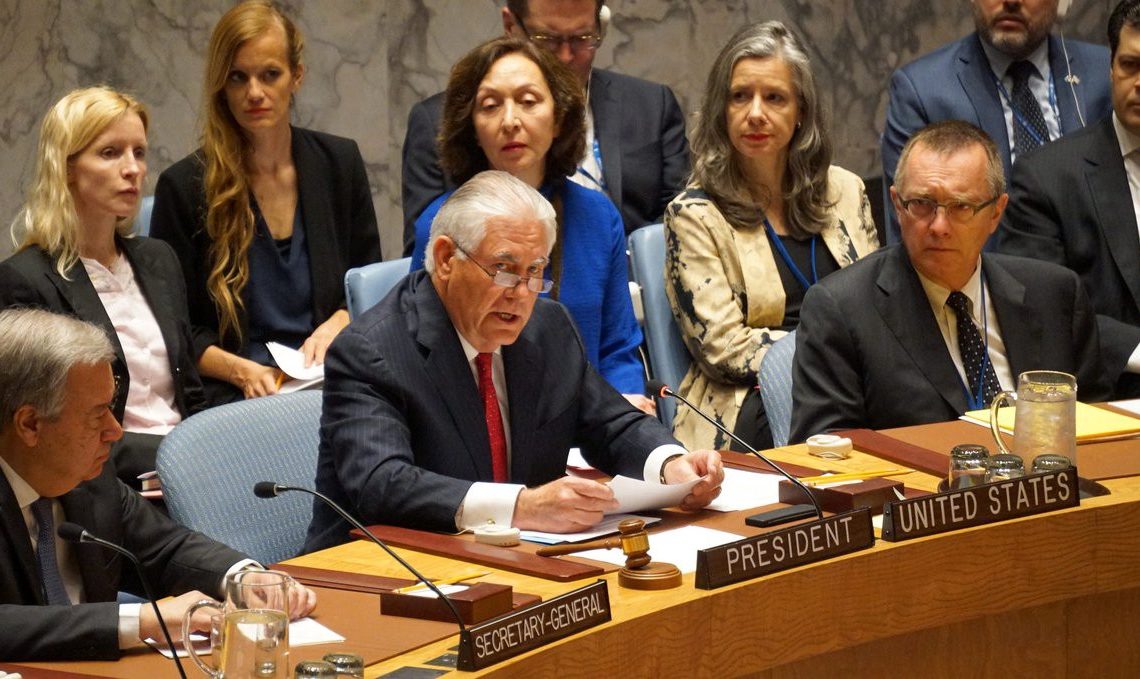 Remarks
Rex W. Tillerson
Secretary of State
United Nations
New York City
April 28, 2017
SECRETARY TILLERSON: Thank you, Secretary General, for that most helpful briefing. I shall now make a statement in my capacity as Secretary of State of the United States, and I thank you for the opportunity to address the Security Council.

According to UN Security Council Resolution 2321, a stated objective of this council is North Korea’s abandonment of its nuclear weapons and ballistic missile programs.

For the past 20 years, well-intentioned diplomatic efforts to halt these programs have failed. It is only by first dismantling them that there can be peace, stability, and economic prosperity for all of Northeast Asia.

With each successive detonation and missile test, North Korea pushes Northeast Asia and the world closer to instability and broader conflict.

The threat of a North Korean nuclear attack on Seoul, or Tokyo, is real.

And it is likely only a matter of time before North Korea develops the capability to strike the U.S. mainland.

Indeed, the D.P.R.K. has repeatedly claimed it plans to conduct such a strike. Given that rhetoric, the United States cannot idly stand by. Nor can other members of this council who are within striking distance of North Korean missiles.

Having for years displayed a pattern of behavior that defies multiple UN Security Council resolutions, including 2321 and 2270, and erodes global progress on nuclear nonproliferation, there is no reason to think that North Korea will change its behavior under the current multilateral sanctions framework.

For too long, the international community has been reactive in addressing North Korea. Those days must come to an end.

Failing to act now on the most pressing security issue in the world may bring catastrophic consequences.

We have said this before and it bears repeating: the policy of strategic patience is over. Additional patience will only mean acceptance of a nuclear North Korea.

The more we bide our time, the sooner we will run out of it.

In light of the growing threat, the time has come for all of us to put new pressure on North Korea to abandon its dangerous path.

I urge this council to act before North Korea does.

We must work together to adopt a new approach and impose increased diplomatic and economic pressures on the North Korean regime.

The new campaign the United States is embarking on is driven by our own national security considerations, and it is welcomed by many nations who are concerned for their own security and question why North Korea clings to nuclear capabilities for which it has no need.

Our goal is not regime change. Nor do we desire to threaten the North Korean people or destabilize the Asia Pacific region. Over the years, we have withdrawn our own nuclear weapons from South Korea and offered aid to North Korea as proof of our intent to de-escalate the situation and normalize relations. Since 1995, the United States has provided over $1.3 billion dollars in aid to North Korea, and we look forward to resuming our contributions once the D.P.R.K. begins to dismantle its nuclear weapons and missile technology programs.

The D.P.R.K., for its own sake, must dismantle its nuclear and missile programs if it wants to achieve the security, economic development, and international recognition that it seeks. North Korea must understand that respect will never follow recklessness. North Korea must take concrete steps to reduce the threat that its illegal weapons programs pose to the United States and our allies before we can even consider talks.

I propose all nations take these three actions beginning today:

First, we call on UN member-states to fully implement the commitments they have made regarding North Korea. This includes all measures required in Resolutions 2321 and 2270.

Those nations which have not fully enforced these resolutions fully discredit this body.

Third, we must increase North Korea’s financial isolation. We must levy new sanctions on D.P.R.K. entities and individuals supporting its weapons and missile programs, and tighten those that are already in place. The United States also would much prefer countries and people in question to own up to their lapses and correct their behavior themselves, but we will not hesitate to sanction third-country entities and individuals supporting the D.P.R.K.’s illegal activities.

We must bring maximum economic pressure by severing trade relationships that directly fund the D.P.R.K.’s nuclear and missile program. I call on the international community to suspend the flow of North Korean guest workers and to impose bans on North Korean imports, especially coal.

We must all do our share, but China accounting for 90 percent of North Korean trade, China alone has economic leverage over Pyongyang that is unique, and its role is therefore particularly important. The U.S. and China have held very productive exchanges on this issue, and we look forward to further actions that build on what China has already done.

Lastly, as we have said before, all options for responding to future provocation must remain on the table. Diplomatic and financial levers of power will be backed up by a willingness to counteract North Korean aggression with military action if necessary. We much prefer a negotiated solution to this problem. But we are committed to defending ourselves and our allies against North Korean aggression.

This new pressure campaign will be swiftly implemented and painful to North Korean interest.

I realize some nations for which a relationship with North Korea has been in some ways a net positive may be disinclined to implement the measures of pressure on North Korea.

But the catastrophic effects of a North Korean nuclear strike outweigh any economic benefits. We must be willing to face the hard truths and make hard choices right now to prevent disastrous outcomes in the future.

Business as usual is not an option.

There is also a moral dimension to this problem. Countries must know by now that helping the North Korean regime means enabling cruelty and suffering.

North Korea feeds billions of dollars into a nuclear program it does not need while its own people starve.

The regime’s pursuit of nuclear weapons does not serve its own national security or the well-being of a people trapped in tyranny.

I ask the community of nations to help us preserve security and protect human dignity.

In one of my first trips as America’s Secretary of State, I looked across the DMZ at the haunted land of North Korea. Beyond the border is a nation of sorrow, frozen in time. While the world sees the gleaming buildings of Pyongyang, the blight of oppression and starvation has swept this land for over 60 years.

But even though the present condition of that country is bleak, the United States believes in a future for North Korea. These first steps toward a more hopeful future will happen most quickly if other stakeholders in this – in the region and the global security join us.

For years, North Korea has been dictating the terms of its dangerous course of action.

It is time for us to retake control of the situation.

We ask the members of this council and all other partners to implement a new strategy to denuclearize North Korea.

I resume my function now as president of the council. I now give the floor to His Excellency, Mr. Fumio Kishida, Minister of Foreign Affairs of Japan.