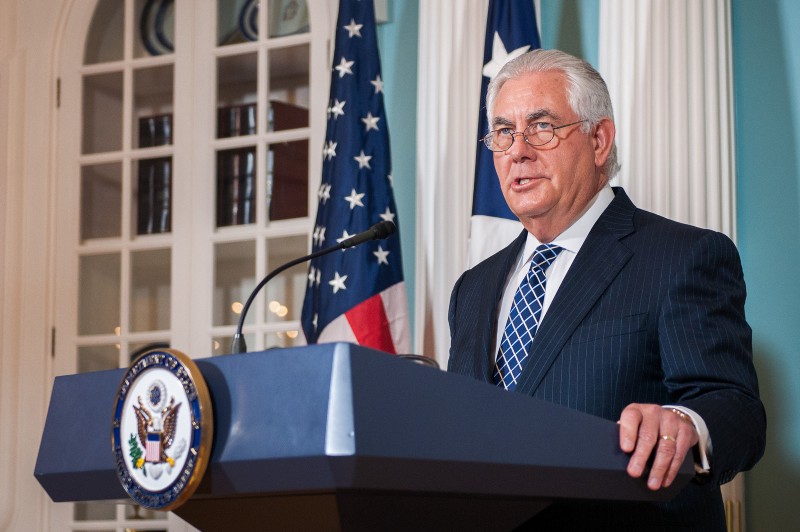 SECRETARY TILLERSON: Morning, all. We are releasing today the 2016 International Religious Freedom Report. This report is a requirement pursuant to the International Religious Freedom Act of 1998 – legislation that upholds religious freedom as a core American value under the Constitution’s First Amendment, as well as a universal human right. This law calls for the government to, quote, “[Stand] for liberty and [stand] with the persecuted, to use and implement appropriate tools in the United States foreign policy apparatus, including diplomatic, political, commercial, charitable, educational, and cultural channels, to promote respect for religious freedom by all governments and peoples.”Almost 20 years after the law’s passage, conditions in many parts of the world are far from ideal. Religious persecution and intolerance remains far too prevalent. Almost 80 percent of the global population live with restrictions on or hostilities to limit their freedom of religion. Where religious freedom is not protected, we know that instability, human rights abuses, and violent extremism have a greater opportunity to take root.

We cannot ignore these conditions. The Trump administration has committed to addressing these conditions in part by advancing international religious freedom around the world. The State Department will continue to advocate on behalf of those seeking to live their lives according to their faith.

The release of the 2016 International Religious Freedom Report details the status of religious freedom in 199 countries and territories, and provides insights as to significant and growing challenges. Today I want to call out a few of the more egregious and troubling examples.

As we make progress in defeating ISIS and denying them their caliphate, their terrorist members have and continue to target multiple religions and ethnic groups for rape, kidnapping, enslavement, and even death.

Application of the law to the facts at hand leads to the conclusion ISIS is clearly responsible for genocide against Yezidis, Christians, and Shia Muslims in areas it controls or has controlled.

ISIS is also responsible for crimes against humanity and ethnic cleansing directed at these same groups, and in some cases against Sunni Muslims, Kurds, and other minorities.

More recently, ISIS has claimed responsibility for attacks on Christian pilgrims and churches in Egypt.

The protection of these groups – and others subject to violent extremism – is a human rights priority for the Trump administration.

We will continue working with our regional partners to protect religious minority communities from terrorist attacks and to preserve their cultural heritage.

As the 2016 report indicates, many governments around the world use discriminatory laws to deny their citizens freedom of religion or belief.

In Iran, Baha’is, Christians, and other minorities are persecuted for their faith. Iran continues to sentence individuals to death under vague apostasy laws – 20 individuals were executed in 2016 on charges that included, quote, “waging war against God.” Members of the Baha’i community are in prison today simply for abiding by their beliefs.

We remain concerned about the state of religious freedom in Saudi Arabia. The government does not recognize the right of non-Muslims to practice their religion in public and applied criminal penalties, including prison sentences, lashings, and fines, for apostasy, atheism, blasphemy, and insulting the state’s interpretation of Islam. Of particular concern are attacks targeting Shia Muslims, and the continued pattern of social prejudice and discrimination against them. We urge Saudi Arabia to embrace greater degrees of religious freedom for all of its citizens.

In Turkey, authorities continued to limit the human rights of members of some religious minority groups, and some communities continue to experience protracted property disputes. Non-Sunni Muslims, such as Alevi Muslims, do not receive the same governmental protections as those enjoyed by recognized non-Muslim minorities and have faced discrimination and violence. Additionally, the United States continues to advocate for the release of Pastor Andrew Brunson, who has been wrongfully imprisoned in Turkey.

In China, the government tortures, detains, and imprisons thousands for practicing their religious beliefs. Dozens of Falun Gong members have died in detention. Police – policies that restrict Uighur Muslims’ and Tibetan Buddhists’ religious expression and practice have increased.

Religious freedom is under attack in Pakistan, where more than two dozen are on death row or serving a life imprisonment for blasphemy. The government marginalizes Ahmadiyya Muslims, and refuses to recognize them as Muslim. It is my hope that the new prime minister and his government will promote interfaith harmony and protect the rights of religious minorities.

Finally, in Sudan the government arrests, detains, and intimidates clergy and church members. It denies permits for the construction of new churches and is closing or demolishing existing ones.

We encourage the Government of Sudan to engage concretely on the religious freedom action plan provided by the department last year.

No one should have to live in fear, worship in secret, or face discrimination because of his or her beliefs. As President Trump has said, we look forward to a day when, quote, “people of all faiths, Christians and Muslims and Jewish and Hindu, can follow their hearts and worship according to their conscience,” end quote.

The State Department will continue its efforts to make that a reality. Recently nominated Ambassador-at-Large for International Religious Freedom, Governor Sam Brownback, will be the highest-ranking official ever to take up this important post. We look forward to his swift confirmation.

I thank my many colleagues at the department and overseas who contributed to this report, and specifically the Office of International Religious Freedom, including Senior Advisor on Global Justice Issues Pam Pryor, Special Advisor for Religious Minorities Knox Thames, and the previous ambassador-at-large, David Saperstein.

We look forward to working with Congress, and the administration, to continue America’s indispensable role as a champion of religious freedom the world over. Thank you very much.

QUESTION: Mr. Secretary, do you have any response to Kim Jong-un’s decision to pull back his threat on Guam?

SECRETARY TILLERSON: No, I have no response to his decisions at all at this time. Thank you.

QUESTION: Any comments on the situation there, in North Korea?

SECRETARY TILLERSON: We continue to be interested in finding a way to get to a dialogue, but that’s up to him. Thank you.