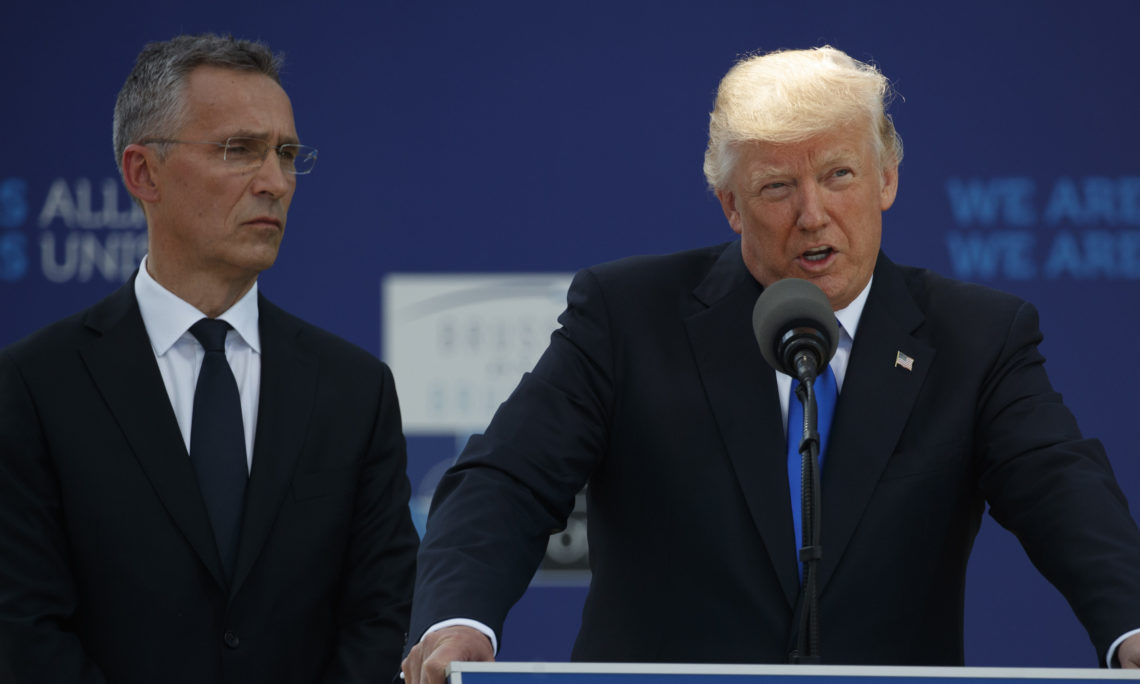 The White House
Office of the Press Secretary

Remarks by President Trump at NATO Unveiling of the Article 5 and Berlin Wall Memorials – Brussels, Belgium

PRESIDENT TRUMP: Thank you very much, Secretary General Stoltenberg. Chancellor Merkel, thank you very much. Other heads of state and government, I am honored to be here with members of an alliance that has promoted safety and peace across the world.

Prime Minister May, all of the nations here today grieve with you and stand with you. I would like to ask that we now observe a moment of silence for the victims and families of the savage attack which took place in Manchester. (A moment of silence is observed.) Thank you. Terrible thing.

This ceremony is a day for both remembrance and resolve. We remember and mourn those nearly 3,000 innocent people who were brutally murdered by terrorists on September 11th, 2001. Our NATO allies responded swiftly and decisively, invoking for the first time in its history the Article 5 collective defense commitments.

The recent attack on Manchester in the United Kingdom demonstrates the depths of the evil we face with terrorism. Innocent little girls and so many others were horribly murdered and badly injured while attending a concert — beautiful lives with so much great potential torn from their families forever and ever. It was a barbaric and vicious attack upon our civilization.

All people who cherish life must unite in finding, exposing, and removing these killers and extremists — and, yes, losers. They are losers. Wherever they exist in our societies, we must drive them out and never, ever let them back in.

This call for driving out terrorism is a message I took to a historic gathering of Arab and Muslim leaders across the region, hosted by Saudi Arabia. There, I spent much time with King Salman, a wise man who wants to see things get much better rapidly. The leaders of the Middle East have agreed at this unprecedented meeting to stop funding the radical ideology that leads to this horrible terrorism all over the globe.

My travels and meetings have given me renewed hope that nations of many faiths can unite to defeat terrorism, a common threat to all of humanity. Terrorism must be stopped in its tracks, or the horror you saw in Manchester and so many other places will continue forever. You have thousands and thousands of people pouring into our various countries and spreading throughout, and in many cases, we have no idea who they are. We must be tough. We must be strong. And we must be vigilant.

The NATO of the future must include a great focus on terrorism and immigration, as well as threats from Russia and on NATO’s eastern and southern borders. These grave security concerns are the same reason that I have been very, very direct with Secretary Stoltenberg and members of the Alliance in saying that NATO members must finally contribute their fair share and meet their financial obligations, for 23 of the 28 member nations are still not paying what they should be paying and what they’re supposed to be paying for their defense.

This is not fair to the people and taxpayers of the United States. And many of these nations owe massive amounts of money from past years and not paying in those past years. Over the last eight years, the United States spent more on defense than all other NATO countries combined. If all NATO members had spent just 2 percent of their GDP on defense last year, we would have had another $119 billion for our collective defense and for the financing of additional NATO reserves.

We should recognize that with these chronic underpayments and growing threats, even 2 percent of GDP is insufficient to close the gaps in modernizing, readiness, and the size of forces. We have to make up for the many years lost. Two percent is the bare minimum for confronting today’s very real and very vicious threats. If NATO countries made their full and complete contributions, then NATO would be even stronger than it is today, especially from the threat of terrorism.

I want to extend my appreciation to the 9/11 Memorial and Museum in New York for contributing this remnant of the North Tower, as well as to Chancellor Merkel and the German people for donating this portion of the Berlin Wall. It is truly fitting that these two artifacts now reside here so close together at the new NATO Headquarters. And I never asked once what the new NATO Headquarters cost. I refuse to do that. But it is beautiful.

Each one marks a pivotal event in the history of this Alliance and in the eternal battle between good and evil. On one side, a testament to the triumph of our ideals over a totalitarian Communist ideology bent on the oppression of millions and millions of people; on the other, a painful reminder of the barbaric evil that still exists in the world and that we must confront and defeat together as a group, as a world.

This twisted mass of metal reminds us not only of what we have lost, but also what forever endures — the courage of our people, the strength of our resolve, and the commitments that bind us together as one.

We will never forget the lives that were lost. We will never forsake the friends who stood by our side. And we will never waiver in our determination to defeat terrorism and to achieve lasting security, prosperity and peace.

Thank you very much. It’s a great honor to be here. Thank you.