Home Главная страница | News & Events | Remarks at an Emergency UN Security Council Briefing on Chemical Weapons Use by Russia in the U.K. 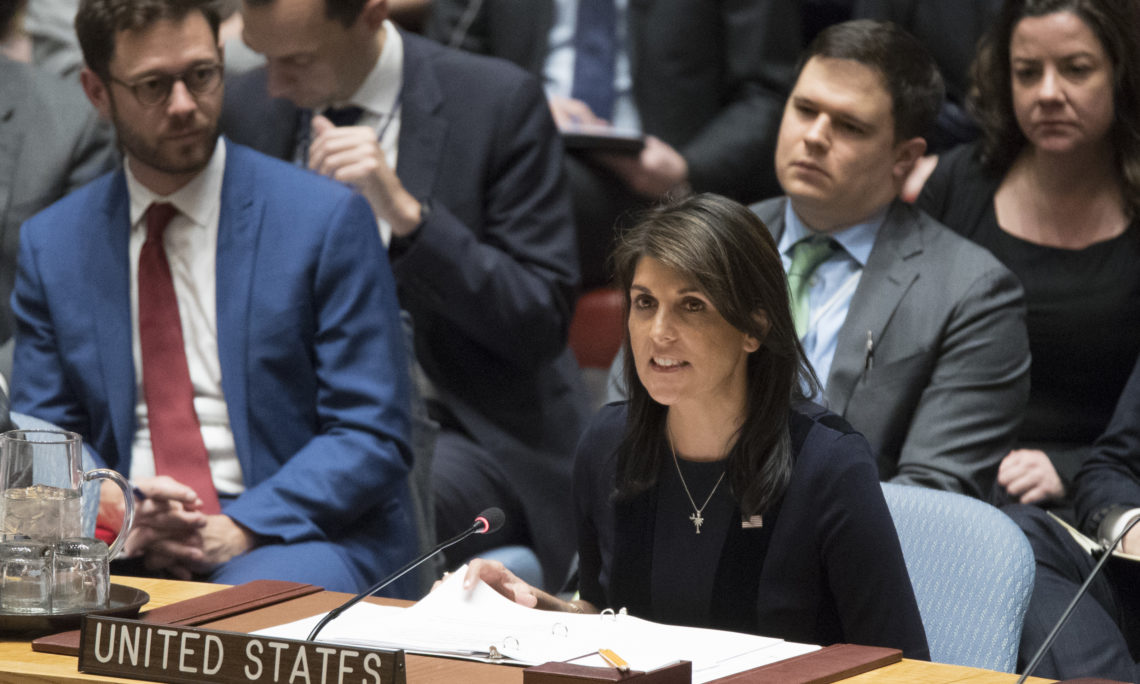 Thank you, Mr. President. And I thank my British colleagues for calling this important meeting.

We’re here today to discuss the use of a chemical weapon by one Council member in the territory of another Council member. Let me make one thing clear from the very beginning: the United States stands in absolute solidarity with Great Britain. The United States believes that Russia is responsible for the attack on two people in the United Kingdom using a military-grade nerve agent.

Dozens of civilians and first responders were also exposed. Police officer Nick Bailey was the first to arrive on the scene and remains hospitalized in serious condition. Our thoughts and prayers go out to the victims of this atrocious crime.

Alone, Russia’s crime is worthy of this Council’s action. But this is not an isolated incident. The assassination attempt in Salisbury is part of an alarming increase in the use of chemical weapons. Last year, the North Korean regime used the nerve agent VX to publicly assassinate Kim Jong Un’s brother in a Malaysian airport. In Syria, the Assad regime continues to kill its own people with chemical weapons years after this Council passed Resolution 2118 to remove the threat from Syria’s chemical weapons program. When the Security Council created a mechanism to investigate chemical weapons attacks, that mechanism was targeted when it began to shine a spotlight on Assad’s role in killing his own people.

A growing concern in all of this dangerous and destabilizing activity is Russia. Russia failed to ensure Syria destroyed its chemical weapons program. Russia killed the Joint Investigative Mechanism when it found Assad liable for chemical attacks. Russia used its veto to shield Assad five times last year. It has also provided cover for Syria in the Hague at the Organization for the Prohibition of Chemical Weapons.

The Russians complained recently that we criticize them too much. If the Russian government stopped using chemical weapons to assassinate its enemies; and if the Russian government stopped helping its Syrian ally to use chemical weapons to kill Syrian children; and if Russia cooperated with the Organization for the Prohibition of Chemical Weapons by turning over all information related to this nerve agent, we would stop talking about them. We take no pleasure in having to constantly criticize Russia, but we need Russia to stop giving us so many reasons to do so.

Russia must fully cooperate with the UK’s investigation and come clean about its own chemical weapons program.

Russia is a permanent member of the Security Council. It is entrusted in the United Nations Charter with upholding international peace and security. It must account for its actions.

If we don’t take immediate, concrete measures to address this now, Salisbury will not be the last place we see chemical weapons used. They could be used here in New York or in cities of any country that sits on this Council. This is a defining moment. Time and time again, Member States say they oppose the use of chemical weapons under any circumstance. Now, one member stands accused of using chemical weapons on the sovereign soil of another member. The credibility of this Council will not survive if we fail to hold Russia accountable.