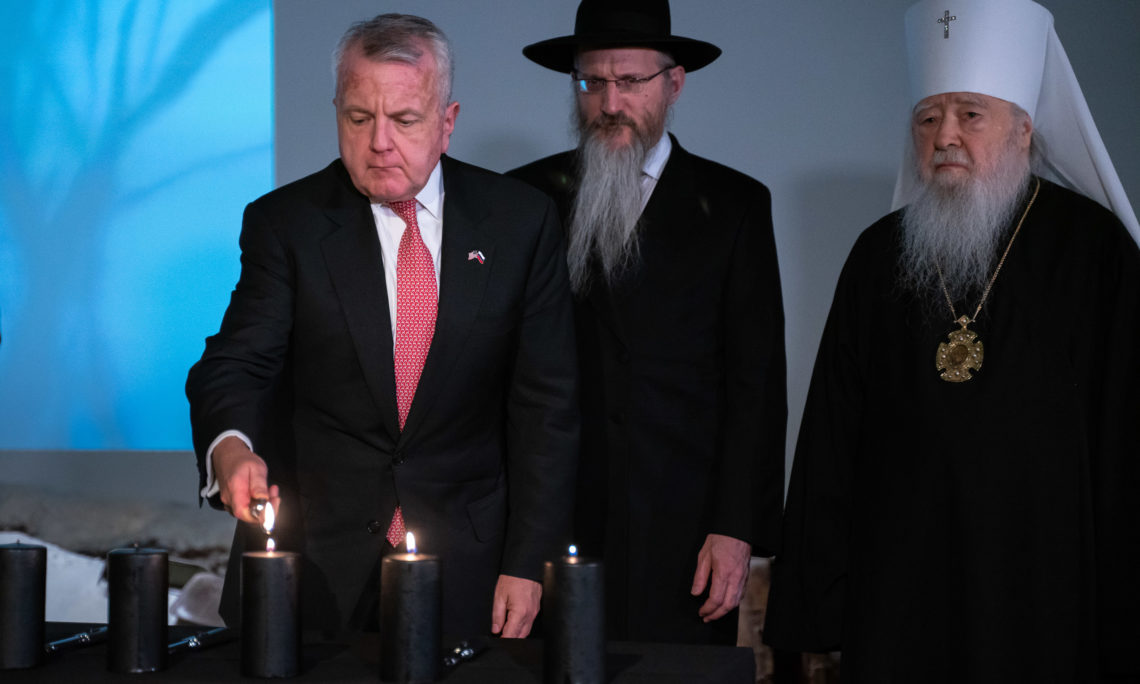 Ambassador Sullivan lighting a memorial candle during the January 27, 2020, International Holocaust Remembrance Event at the Jewish Museum and Tolerance Center

Rabbi Lazar, Rabbi Boroda, honored guests. As you probably know, I arrived in Moscow less than two weeks ago, and this is one of the first public events in which I have had the opportunity to participate.

Thank you for inviting me to join with you at this solemn event for International Holocaust Remembrance Day. As others have recalled, I am mindful that today marks the 75th anniversary of the liberation of Auschwitz-Birkenau, a horrific concentration camp where over a million people perished.

In observing International Holocaust Remembrance Day, we join people all over the world in honoring the victims of this unparalleled crime against humanity. We mourn the six million Jews and millions of Slavs, Roma, Jehovah’s Witnesses, LGBTI individuals, and persons with disabilities who were so cruelly murdered by the Nazi regime.

I stand before you today to underscore the United States’ unwavering commitment to preserving the memory of the Holocaust and doing everything possible to prevent anything like it from happening ever again.

The strength and bravery of those who survived the Holocaust has always inspired me, and it is critical that we preserve their voices for future generations.

I am encouraged by the incredible work that the Jewish Museum and Tolerance Center has done here in Russia toward that goal. The beautiful new exhibit that opens today shows how, even under the most horrific circumstances, people never lose their capacity to hope, love, and forgive.

Thank you again for the opportunity to speak before you today. I look forward to working with the Federation of Jewish Communities of Russia and other Jewish leaders, the Russian government, and representatives of other faith communities in promoting tolerance and interfaith cooperation during my time as Ambassador here.