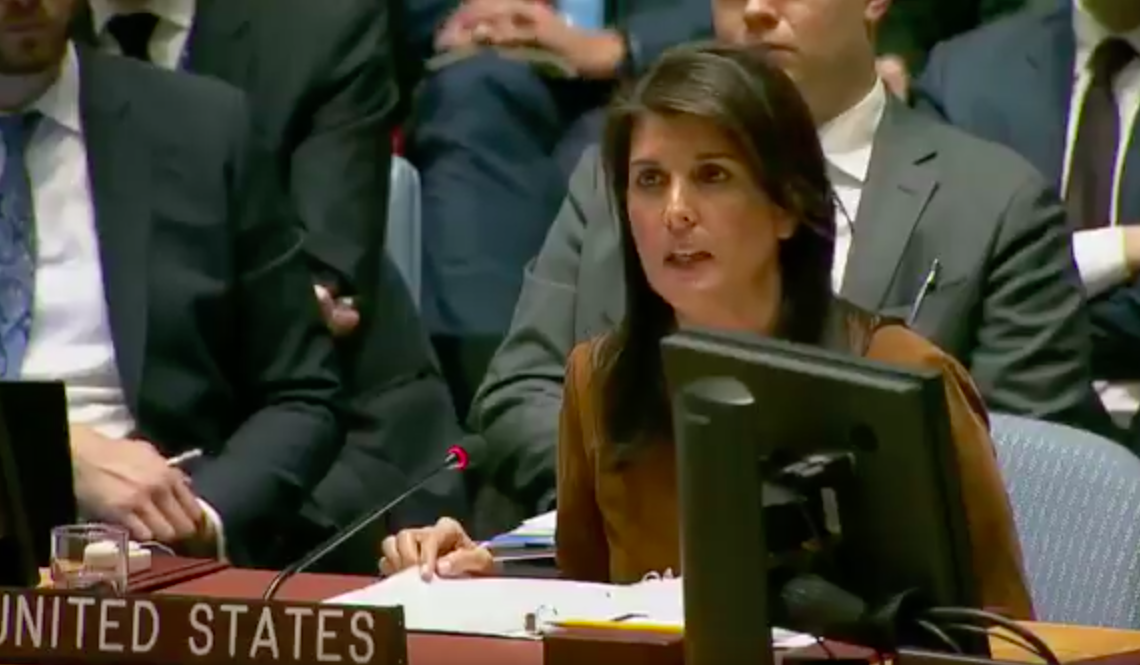 Almost exactly one year ago, I stood on the floor of the Security Council and held up pictures of dead Syrian children. After that day, I prayed that I would never have to do that again. I could; there are many truly gruesome pictures. Many of us have worked hard to ensure that one day, we would not have to see images of babies gassed to death in Syria.

But the day we prayed would never come has come again. Chemical weapons have once again been used on Syrian men, women, and children. And once again, the Security Council is meeting in response.

This time, I’m not going to hold up pictures of victims. I could – there are many, and they are gruesome. Worse are the videos imprinted in our minds that no one should ever have to see.

I could hold up pictures of babies, lying dead next to their mothers. Brothers and sisters. Toddlers and infants still in diapers. All lying together, dead. Their skin is the ashen blue that is now tragically familiar from chemical weapons scenes. Their eyes are open and lifeless. White foam bubbles from their mouths and noses. Pictures of dead Syrians who are not soldiers. People who are not armed. People who are the very definition of innocent and non-threatening – women and children hiding in basements from a renewed assault by Bashar Al-Assad. Families that were hiding underground to escape Assad’s conventional bombs and artillery.

But the basements, that Syrian families thought would shelter them from conventional bombs, were the worst place to be when chemical weapons fell from the sky. And Saturday evening, the basements of Douma became their tombs. It’s impossible to know for certain how many have died because access to Douma is cut off by Assad’s forces. But dozens are dead that we know of, and hundreds are wounded.

Ambulances and rescue vehicles have been repeatedly attacked, maximizing the number of dead civilians. Civil defense centers have been attacked in order to paralyze the medical response – to increase the suffering of the survivors.

Who does this? Only a monster does this. Only a monster targets civilians and then ensures that there are no ambulances to transfer the wounded. No hospitals to save their lives. No doctors or medicine to ease their pain.

I could hold up pictures of all of this killing and suffering for the Council to see, but what would be the point? The monster who was responsible for these attacks has no conscience, not even to even be shocked by pictures of dead children.

The Russian regime, whose hands are all covered in the blood of Syrian children, cannot be ashamed by pictures of its victims. We’ve tried that before. We must not overlook Russia and Iran’s roles in enabling the Assad regime’s murderous destruction. Russia and Iran have military advisers at Assad’s airfields and operations centers. Russian officials are on the ground helping direct the regime’s “starve and surrender” campaign, and Iranian allied forces do much of the dirty work. When the Syrian military pummels civilians, they rely on the military hardware given by Russia.

Russia could stop this senseless slaughter if it wanted. But it stands with the Assad regime and supports without any hesitation.

What’s the point of trying to shame such people? After all, no civilized government would have anything to do with Assad’s murderous regime. Pictures of dead children mean little to governments like Russia who expend their own resources to prop up Assad.

And this Council, which saw these pictures last year, has failed to act because Russia has stood in its way every single time. For a year we’ve allowed Russia to hold the lives of innocent Syrians hostage to its alliance with the Assad regime. This allowed Russia to also weaken the credibility of the United Nations.

We are quick to condemn chemical weapons in the Security Council, but then Russia prevents any action, vetoing five resolutions on this issue alone. Eleven vetoes all together to save Assad. And our lives go on as usual.

The Council created the Joint Investigative Mechanism. It found the Syrian regime responsible for the attack at Khan Sheikhoun a year ago. Because Russia supported Assad and his actions, Russia killed the mechanism. We condemned it. And our lives went on as usual.

We pushed for a ceasefire. The Council unanimously agreed. But it was immediately ignored by Russia and Assad. We condemned it. And our lives went on as usual.

And now here we are – confronted with the consequences of giving Russia a pass in the name of unity. A unity that Russia has shown many times before they don’t want. Here we are, in a world where chemical weapons use is becoming normalized – from an Indonesian* airport, to an English village, to the homes and hospitals of Syria. Since the Assad regime used chemical weapons at Khan Sheikhun one year ago, chemical weapons have been reportedly used dozens of times. And this Council does nothing.

What we are dealing with today is not about a spat between the United States and Russia. This is about the inhumane use of chemical agents on innocent civilians. Each and every one of the nations in this Council are on record opposing the use of chemical weapons. There can be no more rationalizations for our failure to act.

We have already introduced and circulated to the Council a resolution demanding unrestricted humanitarian access to the people of Douma. Assad is doing all he can to assure maximum suffering in Douma. Our priority must be to help the starving, the sick, and the injured that have been left behind. We also call on this Council to immediately re-establish a truly professional and impartial mechanism for chemical weapons attacks in Syria, including the attack this weekend. We hope our colleagues on this Council will join us, as they have before. This is the very minimum we can do in response to the attack we just witnessed.

Russia’s obstructionism will not continue to hold us hostage when we are confronted with an attack like this one. The United States is determined to see that the monster who dropped chemical weapons on the Syrian people held to account.

You heard what the President of the United States has said about this. Meetings are ongoing. Important decisions are being weighed even as we speak.

We are on the edge of a dangerous precipice. The great evil of chemical weapons use that once unified the world in opposition, is on the verge of becoming the new normal. The international community must not let this happen.

Either way, the United States will respond.