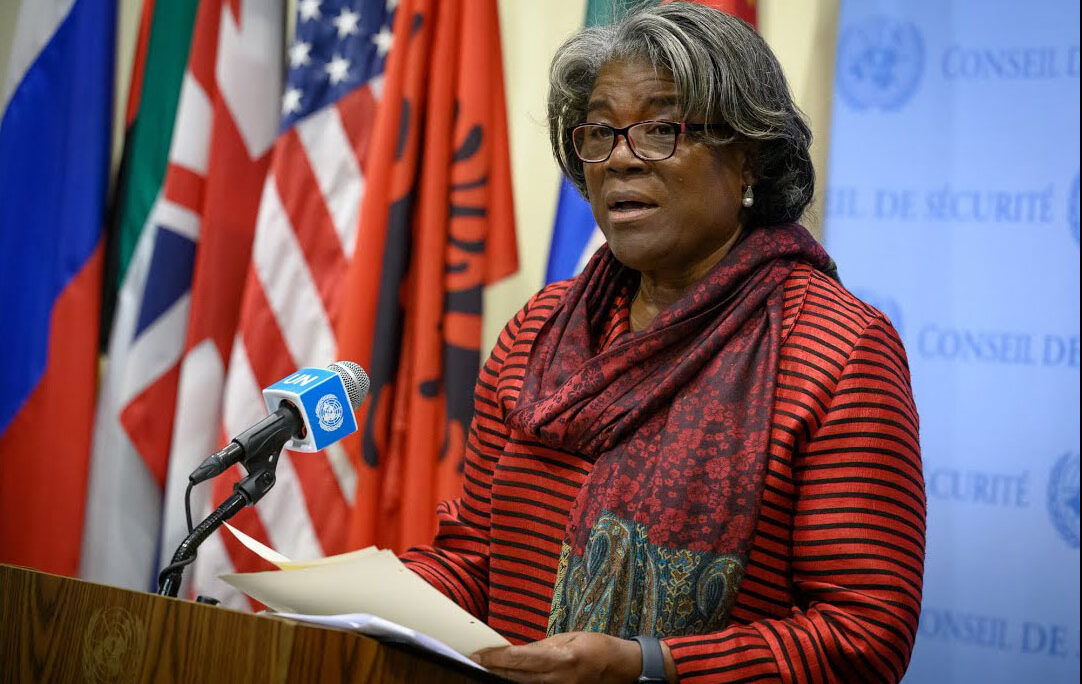 Thank you, Mr. President. Under-Secretary-General DiCarlo, thank you for your briefing. Deputy Foreign Minister Dzhaparova, thank you for joining us today.

On January 1, as the rest of us were celebrating and welcoming the new year, the people of Ukraine endured three straight nights of Russian missiles and drone strikes against their cities. These attacks were barbaric. They destroyed systems that provide heat and light to the Ukrainian people during the coldest, darkest part of winter. They are not the actions of a country ready to give up on war.

This new year offers us, along with our new colleagues on the Council, an opportunity to reflect on the last year. Let’s start by reminding ourselves of the mandate of this body. The Security Council is the primary body responsible for the maintenance of international peace and security. That is a serious, solemn duty. The UN Charter, and the peace it strives to achieve, is in our hands – it’s in our care.

Last January, we feared this peace was at risk. Twelve months ago, the United States first warned of troubling signs that Russia was planning a massive, full-scale invasion of Ukraine. As Russia amassed troops along the Ukrainian border, including in Belarus, we rang alarm bells and pursued every diplomatic avenue possible to prevent war.

In January 2022, we convened urgent meetings, including at the OSCE, the NATO-Russia Council, and the bilateral U.S.-Russia Strategic Stability Dialogue. Our goal was for all sides to resolve their concerns through dialogue and diplomacy. But Russia chose a different path. President Putin chose to strike at the heart of the UN Charter. He chose war at the exact moment, in fact, that we were working in this Council to keep the peace.

Today, we are all feeling the direct and spillover effects of this senseless war. For example, Russia’s war in Ukraine has dramatically exacerbated the global food crisis. The World Food Program estimates that more than 345 million people are suffering from or at risk of acute food insecurity. Acute. That means they are in imminent danger of dying. Three hundred forty-five million people – that’s more than double the amount in 2019.

Russia’s attacks and continued blocking of some Ukrainian ports have decreased Ukraine’s food exports by approximately 30 percent. And we thank Türkiye and the UN Secretary-General for helping to broker the Black Sea Grain Initiative, which has been critical to feeding the world’s hungry.

But here’s the truth: The Initiative’s operations are not keeping pace with the strong global demand for Black Sea grain. Due to Russia’s deliberate slowdown of inspections, dozens of ships are waiting to depart. And dozens more are waiting for inspections before they can bring their grain cargo to the world.

This backlog means extra expense and extra delay for millions of tons of grain, a majority of which is destined for developing countries. The backlog means 2.5 million tons of grain are just sitting there, waiting to move, and farmers in Ukraine are waiting to plant. Some ships have been waiting for over a month. Grain is moving at just half the rate of the pace back in September and October.

The Initiative should operate as it was envisioned, moving five million tons of food per month. The world’s hungry deserve nothing less. Today, I’m asking members of the Council to join us in urging Russia to scale up cooperation immediately.

As we work to contain the ripple effect of Russia’s war, we must also be laser focused on the horrors happening in Ukraine on the ground. Last week, The New York Times detailed the harrowing accounts from the Ukrainian Prosecutor General’s office of well-documented cases of sexual violence committed against women, men, and children by Russian Federation forces. I strongly encourage everyone – everyone at this table and listening here today – to read this report. The details are too awful, too sickening for me to recount here today. Of course, we don’t only have to rely on The New York Times. The UN’s Independent International Commission of Inquiry has documented numerous reported cases of sexual violence and torture.

Just as when we warned this Council last January that Russia was planning a full-scale invasion of Ukraine, we also warned this Council more recently that Iran and the DPRK planned to transfer prohibited materiel to Russia. They have. Since August, Iran has transferred hundreds of UAVs to Russia, in violation of UN Security Council Resolution 2231. Russia has been using these Iranian UAVs to strike Ukraine’s energy infrastructure, depriving millions of Ukrainian civilians of electricity, heat, and critical services in the middle of winter. People in Ukraine today are suffering and dying as a result of Iran’s support.

We believe Iran is now considering the sale of hundreds of ballistic missiles to Russia and also in violation of Council resolutions. We urge Iran to reverse course and not to take these steps. And we urge everyone who supports peace to ask Iran to do the same.

Meanwhile, DPRK officials said publicly that they would not support Russia’s war in Ukraine. But they have since delivered arms to the Wagner Group, in direct violation of Security Council resolutions. Last month, DPRK delivered infantry rockets and missiles into Russia for use by Russian Federation-backed Wagner in violation of the Council’s sanctions resolutions. And we are concerned that the DPRK is planning to deliver more military equipment to Wagner.

We condemn the DPRK’s actions and urge the DPRK to cease these deliveries and come into compliance with the relevant Security Council resolutions. And once again, we encourage everyone to join us in that call.

Mr. President, as we start this new year, the world is tired of war. The people of Ukraine, who have suffered so much, crave to return to a normal life. Now is the time for all countries to stand together and demand that Russia end this senseless war. We must come together in defense of the UN Charter and its most fundamental principles. We must come together to achieve a just and secure peace, consistent with the Charter.

And let us continue to do everything in our power to contain the ripple effects of Russia’s actions, help those who are suffering both in Ukraine and outside its borders, and hold accountable everyone who violates international law and supports this illegal, immoral war.