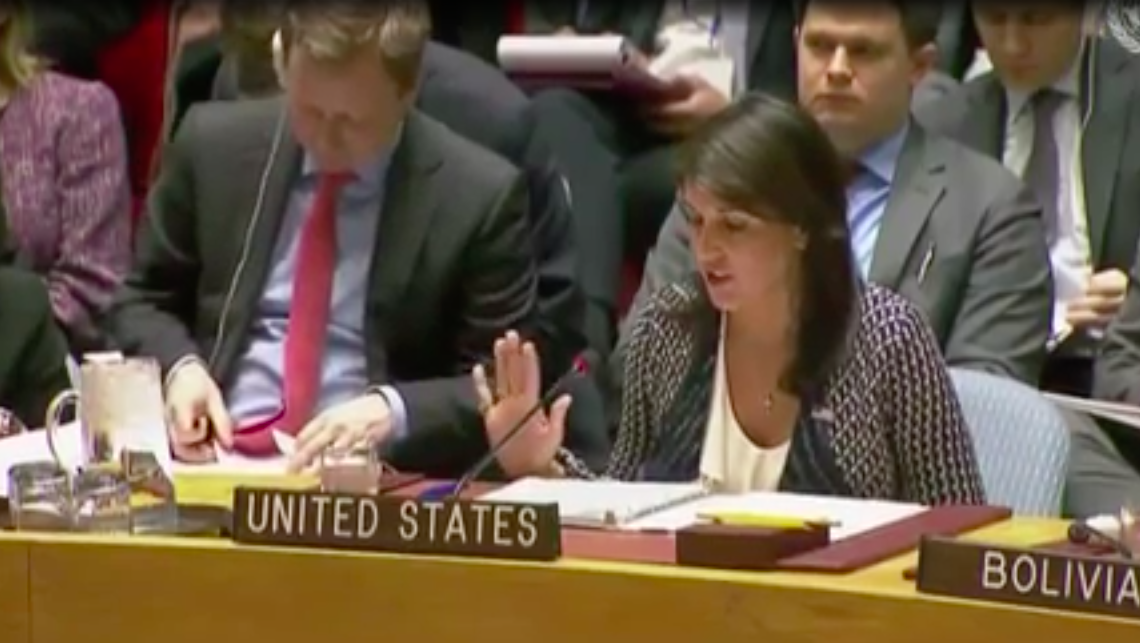 Thank you, Mr. President. Thank you, Mr. Secretary-General. I started to listen to my Russian friend and respond, but instead I’m in awe, Vassily, of how you say what you say with a straight face – I really, really am. Today’s session of the Security Council has been called under truly strange circumstances.

The Russian Federation has asked us to discuss what it calls “unilateral threats” related to Syria. What is strange is that Russia is ignoring the real threat to international peace and security that has brought us all here. And it is ignoring its own unilateral responsibility for all of it.

What we should discuss today is the use of deadly chemical weapons to murder innocent Syrian civilians. That is one of the most blatant and grotesque violations of international law in the world today. It is a violation of all standards of morality. It violates the longstanding international consensus that chemical weapons represent a unique evil.

Chlorine, mustard gas, and other chemical weapons killed 90,000 people and injured over a million in World War I.

In the book “Canada in the Great World War,” the Canadian soldier A.T. Hunter, described it like this: “The gas cloud gathered itself like a wave and ponderously lapped over into the trenches. Then passive curiosity turned to active torment – a burning sensation in the head, red-hot needles in the lungs, the throat seized by a strangler.”

“Many fell and died on the spot. The others, gasping, stumbling, with faces contorted, hands wildly gesticulating, and uttering hoarse cries of pain, fled madly though the villages and farms and through [the city] itself, carrying panic to the remnants of the civilian population and filling the roads with fugitives of both sexes and all ages.”

Chemical weapons didn’t produce the most casualties in World War I, but they were the most feared.

In World War II, chemical weapons were employed on an industrial scale against civilians, resulting in the worst genocide in human history, which we recalled just yesterday on Holocaust Remembrance Day.

The first response to all this death and injury was the 1925 Geneva Protocol which banned the use of chemical weapons in war.

Later, in 1993, the Chemical Weapons Convention was signed. That Convention obligates all of its parties to quote, “never, under any circumstances” develop, produce, stockpile, transfer, or use chemical weapons. It also prohibits all parties from assisting anyone to engage in these activities.

So, in theory, all of us agree on the core principle at stake today: no country can be allowed to use chemical weapons with impunity.

Now that we have established what we all agree on, let’s ask ourselves what should we be condemning today?

We should be discussing the actions that really brought us to this moment in time.
We should not be condemning the country or group of countries that might actually have the courage to stand up in defense of our common principle. The principle against the use of chemical weapons.

Instead, we should be condemning the country that unilaterally has stopped the Security Council from upholding this principle.

Who is it on the Council that most exhibits unilateralism when it comes to chemical weapons?
It is Russia alone that has stopped at nothing to defend the Syrian regime’s multiple uses of chemical weapons.

It is Russia alone that killed the Joint Investigative Mechanism which allowed the world to ensure accountability for chemical weapons use in Syria.

It is Russia alone that used its veto six times to prevent the condemnation of Assad’s use of chemical weapons.

It is Russia alone that used its veto 12 times to protect the Assad regime.

And to make matters worse, it is Russia alone that had agreed to be the guarantor of the removal of all chemical weapons in Syria.

If Russia had lived up to its commitment, there would be no chemical weapons in Syria, and we would not be here today.

That is the Russian record of unilateralism. It is a record that has led to the trashing of all international standards against the use of chemical weapons.

This meeting should not be about the so called “unilateral threats,” it should be about the multiple actions Russia has taken to bring us to this point.

Let’s be clear: Assad’s most recent use of poison gas against the people of Douma was not his first, second, third, or even 49th use of chemical weapons.

The United States estimates that Assad has used chemical weapons in the Syrian war at least 50 times. Public estimates are as high as 200.

In the weeks after Assad’s sarin gas attack last April that killed nearly 100 people, including many children, the regime used chlorine gas at least once and possibly as many as three times in the same area.

Last November, just as the Joint Investigative Mechanism mandate expired, the regime attacked its people with sarin again in the Damascus suburbs.

In January, Assad used at least four chlorine-filled rockets in Douma. And then he struck again last weekend. And thanks to Russia, there was no UN body to determine blame.

But we know who did this. Our allies know who did this. Russia can complain all it wants about fake news, but no one is buying its lies and its cover ups.
Russia was supposed to guarantee that Assad wouldn’t use chemical weapons, and Russia did the opposite.

The world must not passively accept the use of chemical weapons after almost a century of their prohibition. Everything the United Nations stands for is being blatantly defied in Syria, with the help of a permanent member of this Council.

The United States and our allies will continue to stand up for truth, accountability, justice, and an end to the use of chemical weapons.