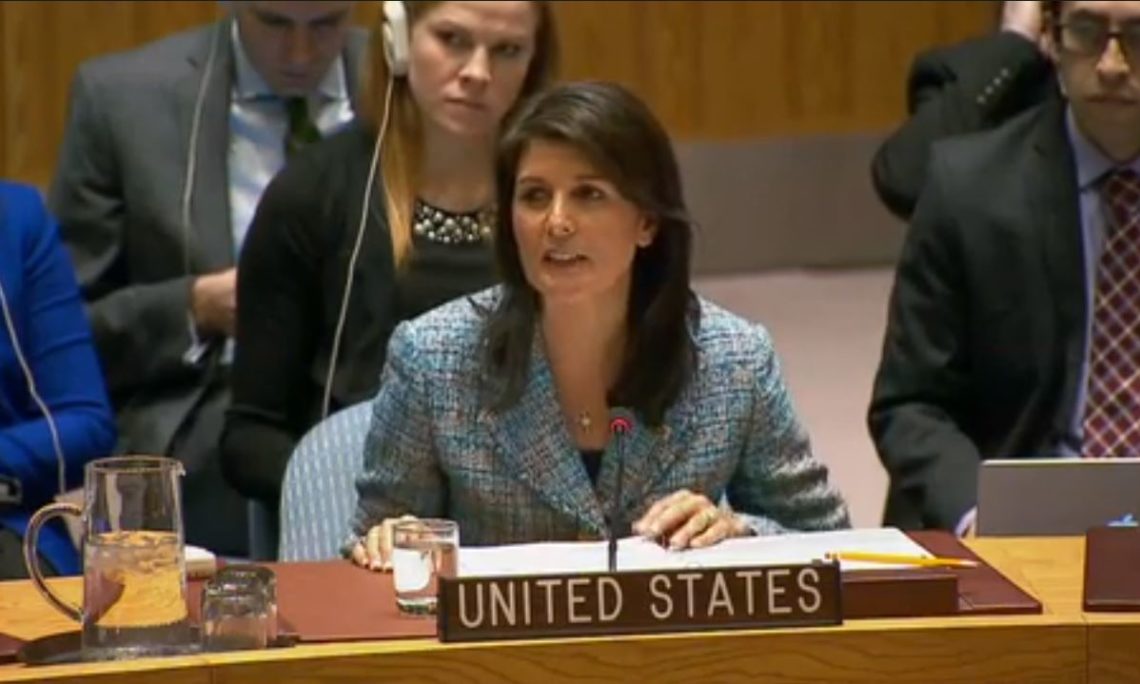 Thank you, Mr. President, and I would like to congratulate Netherlands and your team on having the presidency of the Council this month.

I also want to thank Secretary-General Guterres for your briefing and for all your efforts on behalf of peace in Syria.

Sixteen days ago, we sat around the negotiating table with our Security Council colleagues, and we agreed to a 30-day ceasefire in the brutal bombardment of civilians in Syria. The negotiations were long and difficult. Every minute we delayed meant more innocent people were killed. But the Russian delegation stalled and drew out the talks. They had conditions they insisted on before they would allow the killing to stop. The United States was reluctant to accept those conditions. But in order to stop the killing in Syria, we accepted them. We attempted to work with Russia in good faith to end the violence in Syria.

Today, we know that the Russians did not keep their commitment. Today, we see their actions don’t match those commitments, as bombs continue dropping on the children of eastern Ghouta. Today, we must ask whether Russia can no longer influence the Assad regime to stop the horrific destruction of hospitals, medical clinics, and ambulances. To stop dropping chemical weapons on villages.

Has the situation in Syria reversed, and Russia is now the tool of Assad? Or worse, Iran? We must ask these questions because we know the Russians themselves have continued their own bombing.

In the first four days following the ceasefire, Russian military aircraft conducted at least 20 daily bombing missions in Damascus and eastern Ghouta. The Russians negotiated the wording of the ceasefire, down to the commas and the periods. They voted for the ceasefire. And they immediately disregarded it.

In the past 16 days, over 500 civilians have died, and some reports put the death toll even higher. This is unacceptable. Thousands of Syrians are in desperate need of medical care, but none of the UN’s list have been evacuated. We have heard that conversations are ongoing with the regime to medically evacuate 25 people in the coming weeks. While these civilians should be rushed to medical care, we ask why it took so long. When will the more than 1,000 identified medical cases be evacuated?

There have been almost no deliveries of medicine and surgical equipment, because the Assad regime removed them from the UN’s humanitarian convoys. The convoy that made it to eastern Ghouta on March 5th had to navigate around constant regime airstrikes. The bombing was so severe that the UN could barely unload the food the trucks were carrying. And in the past 16 days, there have been three separate allegations of chlorine gas attacks. This is no ceasefire. This is the Assad regime, Iran, and Russia continuing to wage war against their political opponents.

And there’s another reason we know the Syrians and Russians never intended to implement the ceasefire: because they planned for it. Over the past two weeks, the Russian and Syrian regimes have been busy labeling every opposition group in eastern Ghouta a “terrorist” group. Why? So they can exploit a provision in the ceasefire resolution that allows for military operations against ISIS and Al-Qaeda.

There are terrorists in Syria. But the Russian and Syrian regimes label anyone as terrorists who resist their absolute control. In the eyes of Russia, Iran, and Assad, the neighborhoods of eastern Ghouta are full of “terrorists.” The hospitals are full of “terrorists.” The schools are full of “terrorists.” The Syrian and Russian regimes insist that they are targeting terrorists, but their bombs and artillery continue to fall on hospitals and schools – and on innocent civilians. They have deliberately – and with premeditation – exploited a loophole they negotiated in the ceasefire to continue starving and pummeling hundreds of thousands of innocent Syrian civilians. They have made a mockery of this process and this institution. For the sake of the Syrian people and the integrity of this Council, we must respond and take action.

During the negotiations, the United States put all parties on notice that we needed to act if the ceasefire was not honored, and members of the Security Council agreed. And now that day has come. The ceasefire has failed. The situation of the civilians in eastern Ghouta is dire. And the United States is acting. We have drafted a new ceasefire resolution that provides no room for evasion. It is simple, straightforward, and binding. It will take effect immediately upon adoption by this Council. It contains no counterterrorism loopholes for Assad, Iran and the Russians to hide behind. And it focuses on the area the Secretary-General has identified – and that the world can see – holds the greatest urgency for the lives of innocent civilians: Damascus City and eastern Ghouta.

In the end, that’s what makes the work of this Council possible – trust. If we can’t count on the members of the Council to honor their agreements, we can’t accomplish anything. And if we can’t act when children are dying, we have no business being here. If we can’t save families that haven’t seen the sun for weeks because they have been hiding underground to escape barrel bombs, then the Security Council is as impotent as its worst critics say it is.

Almost a year ago, in the aftermath of the Syrian regime’s sarin gas attack at Khan Sheikhoun, the United States offered a warning to this Council. We said that when the international community consistently fails to act, there are times when states are compelled to take their own action. The Security Council failed to act. And the United States successfully struck the airbase from which Assad had launched his chemical attack. We repeat this warning today. We welcome all nations that will work together to finally provide relief for the Syrian people. And we support the United Nations’ political process that seeks an end to the war in Syria.

But we also warn any nation that is determined to impose its will through chemical attacks and inhuman suffering, most especially the outlaw Syrian regime: the United States remains prepared to act if we must. It is not the path we prefer, but it is a path we have demonstrated we will take, and we are prepared to take it again.