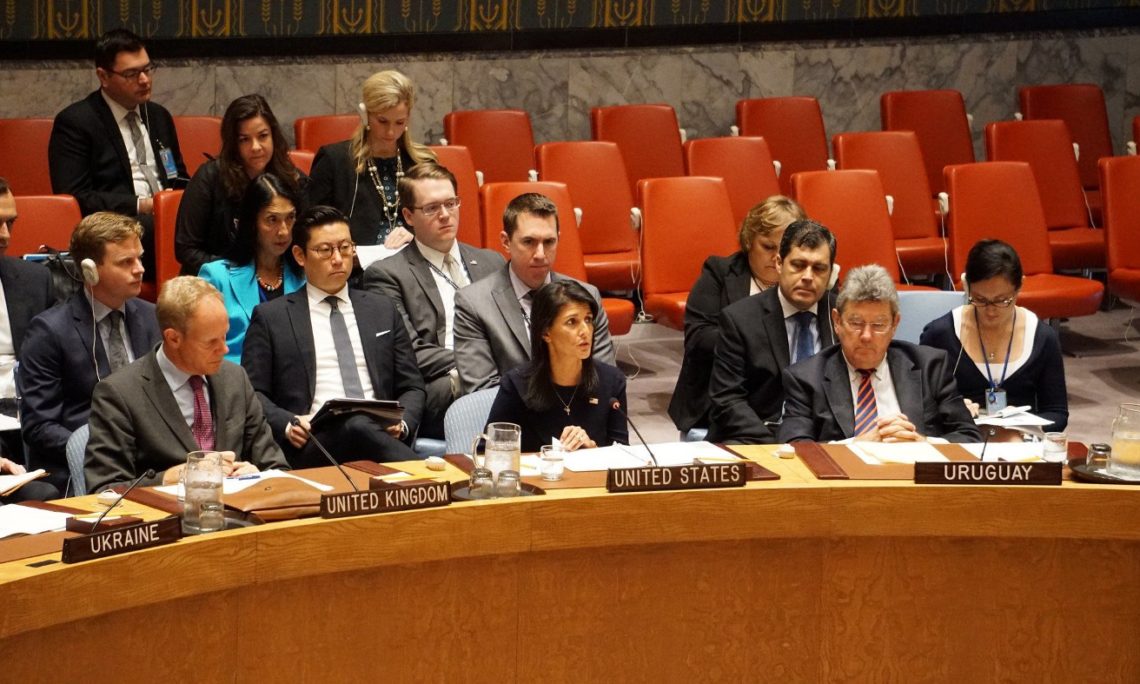 Thank you, Mr. President. And we want to thank you for allowing us to have this prompt meeting, as it’s very urgent. And we also want to thank the Ambassador of Egypt and his team for the steady hand and the calm way in which he lead in this past month.

In 1993, the Council approved Resolution 825 calling on North Korea to remain in the Nonproliferation Treaty. That didn’t work. North Korea withdrew from the treaty and continued its nuclear pursuit.

In 2006, the Six Party Talks faltered, and North Korea conducted several ballistic missile launches. That led to Resolution 1695 condemning them.

The same year, North Korea conducted its first nuclear test. That led to Resolution 1718, establishing a UN sanctions regime, aiming to stop all nuclear, ballistic missile, and other weapons of mass destruction programs.

In 2012, the Leap Day Deal failed, and North Korea conducted two new space launches. The Security Council responded with the adoption of Resolution 2087.

By 2016, North Korea had conducted its fourth nuclear test and another space launch. They followed that with more missile launches. In response, the Council adopted multiple resolutions expanding sanctions even further, targeting whole sectors of North Korea’s economy.

Finally, this year, the Council got even more serious.

That resolution banned North Korean exports of coal, iron, and seafood, and imposed several other measures that will significantly cut off the revenues needed to fund their nuclear program.

Why did I take the time to go through this history?

To make this point. The United Nations Security Council has spoken with unusual unity and consistency on North Korea. That’s a good thing. Along the way, there have been problems with implementation, and the Council has at times been too slow and too weak; but this is not a situation in which we have allowed divisions among us to stop any action.

Still, here we are.

Despite our efforts over the past 24 years, the North Korean nuclear program is more advanced and more dangerous than ever. They now fire missiles over Japanese air space. They now have ICBM capabilities.

They now claim to have tested a hydrogen bomb. And just this morning, there are reports that the regime is preparing for yet another ICBM launch.

To the members of the Security Council, I must say, “enough is enough.”

We have taken an incremental approach, and despite the best of intentions, it has not worked.

Members of this Council will no doubt urge negotiations and a return to talks. But as I have just outlined, we have engaged in numerous direct and multilateral talks with the North Korean regime, and time after time, they have not worked.

The time for half measures in the Security Council is over. The time has come to exhaust all of our diplomatic means, before it’s too late.

We must now adopt the strongest possible measures.

Kim Jong-Un’s action cannot be seen as defensive. He wants to be acknowledged as a nuclear power. But being a nuclear power is not about using those terrible weapons to threaten others. Nuclear powers understand their responsibilities. Kim Jong-Un shows no such understanding.

His abusive use of missiles, and his nuclear threats show that he is begging for war. War is never something the United States wants. We don’t want it now. But our country’s patience is not unlimited. We will defend our allies and our territory.

The idea that some have suggested of a so-called freeze-for-freeze is insulting. When a rogue regime has a nuclear weapon and an ICBM pointed at you, you do not take steps to lower your guard. No one would do that. We certainly won’t.

The time has come to exhaust all diplomatic means to end this crisis, and that means quickly enacting the strongest possible measures here in the UN Security Council. Only the strongest sanctions will enable us to resolve this problem through diplomacy. We have kicked the can down the road long enough. There is no more road left.

This crisis goes well beyond the UN. The United States will look at every country that does business with North Korea as a country that is giving aid to their reckless and dangerous nuclear intentions.

And what we do on North Korea will have a real impact on how other outlaw nations who seek nuclear weapons choose to conduct themselves in the future.

The stakes could not be higher. The urgency is now.

Twenty-four years of half measures and failed talks is enough. Thank you.