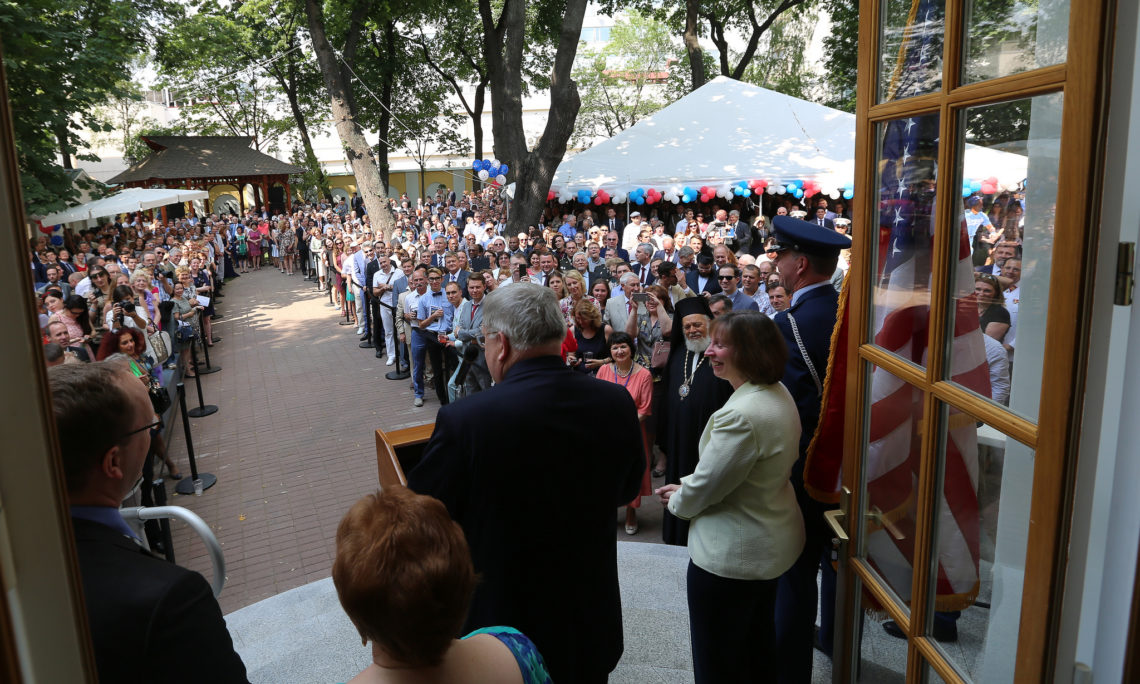 Welcome to Spaso House and our annual Fourth of July reception!

This year, we are celebrating the 240th anniversary of the Declaration of Independence.   That document, together with the U.S. Constitution, has served as the keystone of the American democratic idea.  Recall Thomas Jefferson’s immortal phrase from the Declaration:

“We hold these truths to be self-evident, that all men are created equal, that they are endowed by their Creator with certain unalienable rights that among these are Life, Liberty and the pursuit of Happiness.”

However, I wonder how many of you know that line that follows:

“That to secure these rights, Governments are instituted among Men, deriving their just powers from the consent of the governed.

This fall, our government and yours will once again go through the process of “deriving consent.”  On November 8, 2016, U.S. voters will choose thousands of federal, state and local officials—including a new president.  They’ll do it peacefully.  It is a process that renews our democracy.

Now, don’t forget that line about “the pursuit of happiness.”  We Americans take that idea with equal seriousness.  The Fourth of July is meant to be fun, and we hope our party today keeps to that great tradition.

My wife Mariella and I have a tradition of dedicating each of our Fourth of July receptions to a particular state or region.  This year we are celebrating the great state of Florida.

From the Everglades to Miami, from Disney World to Daytona, Florida is one of our most diverse states.  Today, we hope to capture a bit of that diversity here at the party.  We are featuring Florida’s delicious cuisine at a number of different food stations – including a Greek food station and a Hispanic food station, with delicious Cuban food.

And there’s yet another tempting food station:  the great American pastime of baseball is represented by a booth that offers our finest baseball stadium cuisine, including burgers, hot dogs, and beer.  This year we honor Mariella’s team, the current champions of baseball, the Kansas City Royals.

We also have some great entertainment today.  I am honored to welcome Migguel Anggelo and the Immigrants, a wonderful group based in Miami, Florida that celebrates the musical diversity of Florida.  With members of the group hailing from Cuba, Venezuela, Guatemala, Costa Rica, they are excellent cultural ambassadors of Florida’s vibrant immigrant community.  Their music is a blend of many styles popular throughout the Spanish-speaking world.  I’m very happy that they could join us to celebrate July 4thtoday.  They play again this week at the Moscow House of Music on July 6.

I would like to thank most of all, my wife Mariella and our Independence Day organizers, Diana Costa and Michele Petersen, for their inspiration and hard work in organizing today’s reception.  Thanks also to our dedicated team of embassy staff who worked so hard to make this event a success.  And a special thanks to my Spaso House staff for a great job in preparing the food and sprucing up the house and grounds.  Finally, we want to thank the many businesses which have generously contributed to today’s reception.

I hope you all will enjoy a wonderful Independence Day.  Thank you for coming.