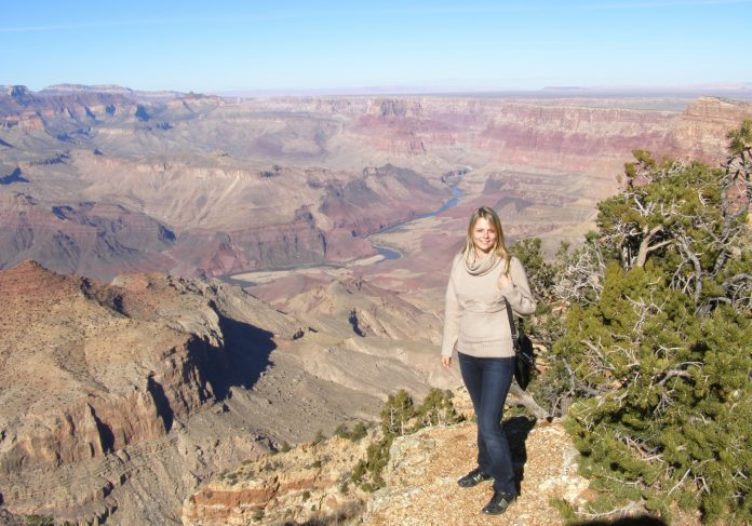 When she is not teaching science to American college students, Mariia Kharina, of Kazan, Russia, finds time to sightsee. On her list: the Statue of Liberty, the Grand Canyon, Mount Rushmore, Niagara Falls and local jazz clubs. (Courtesy photo)

Teaching in the United States has been a life-changing experience for Mariia Kharina, who lectures at Bluefield State College in West Virginia.

With a doctorate in biotechnology, Kharina, a Fulbright scholar from Russia, is well equipped to explain the mysteries of chemistry and biotechnology to her students. But she is learning too. “I was surprised that many Americans are interested in Russia and everything about it,” she said about her experience, which spans the 2016–2017 academic year.

While many Russians, herself included, hope to see famous American sites, such as the Statue of Liberty or the Grand Canyon, Kharina had not expected Americans to demonstrate a similar level of interest about Russia.

But they do. In addition to answering their many questions, Kharina cooks Russian food for American friends, who — despite eating out at restaurants more than Russians would — inevitably ask her to share her recipes. “[They] liked Russian pancakes, ‘bliny,’ with different stuffing,” she said. “As for Russian beet root soup, or ‘borscht,’ some people liked it, some people did not.”

The college at which Kharina teaches is in a rural part of the U.S. She sees wild animals every day, a change from the life she knows back home in the large city of Kazan in Russia’s Republic of Tatarstan.

“It was surprising to see the hummingbirds, the deer and a big, big groundhog from the house where I am staying here,” she told the Bluefield Daily Telegraph. “It’s amazing. I like it.”

The weather is different too. “This is the most unusual winter in my life,” she said. “Usually we have, at home, a lot of snow and freezing, never such warm days. I enjoy it.”

Other than the surrounding wildlife and warm winter, teaching in the United States has been similar to teaching in Russia. Americans “are the same — open-minded and easy to talk to, just like my fellow Russians,” Kharina said.

She’s looking forward to sharing what she’s learned from the American education system with her colleagues in Russia. There are things the two countries can learn from each other to help their students, she said.

College is free in Russia, which means students can better focus on their education without having to work. But American students have more choices in which courses they take. Also, in America, “students are not shy to talk to professors during the lecture. The lecture turns into a dialogue between lecturer and student.”

Most important, Kharina says, is the confidence she has gained through living in the U.S. and the knowledge that “it does not matter which country we are from, what nationality we are; we all have the same problems and dreams.”

Want to study biotechnology — or any other subject — in the United States? Learn about life at U.S. colleges and visit EducationUSA to plan your studies.