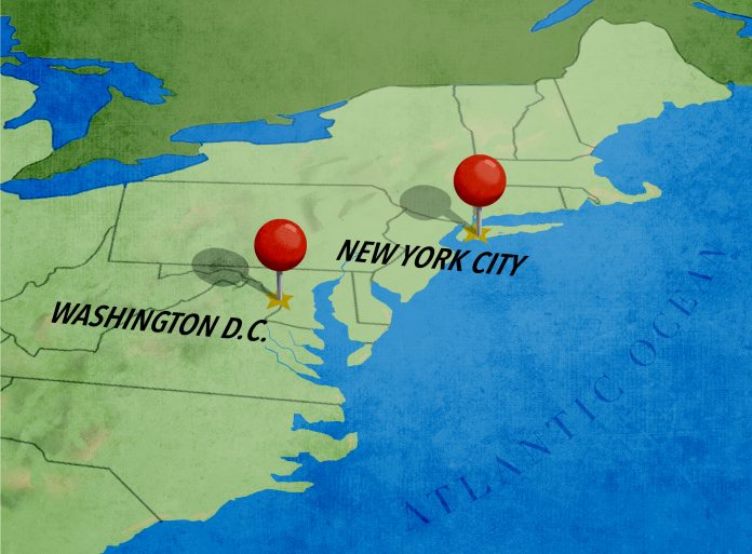 One learn about America through the lens of a Russian journalist.

We turned to Daniil Turovsky, Meduza’s special correspondent and the winner of GQ Russia’s journalist of the year 2015 award, for insights (via Instagram) from his travels in the U.S.

Join us as we start with Turovsky in the nation’s capital, Washington, at the National Mall, a national park in the heart of the city.

This view of the Reflecting Pool and the Washington Monument is taken from the steps of the Lincoln Memorial (not seen in this photo). These are the same steps from which Martin Luther King Jr. delivered his historic “I Have a Dream” speech.

Fans of Robert Zemeckis’s 1994 movie Forrest Gump remember the scene filmed here in which Forrest runs through the Reflecting Pool to meet his sweetheart, Jenny.

The Capitol Building is the seat of the U.S. Congress, the legislative branch of the U.S. federal government. The building houses both sides of Congress — the House of Representatives and the Senate.

In the political drama House of Cards, one of the most infamous TV characters, Frank Underwood, walks the halls of Congress.

Located on Brooklyn’s southern waterfront, Brighton Beach has the highest concentration of Russian immigrants outside the Eastern Hemisphere. They began arriving in the 1800s, and continued to come in large waves in the 1970s and the early 1990s.

Close-by is this well-known, largely residential district in Manhattan, which is often referred to as “the Village.” It has been known as an artists’ haven, a bohemian capital and the East Coast birthplace of both the Beat and 1960s counterculture movements.

The TV show Friends made Greenwich Village famous in a new way. This is the neighborhood where Monica, Rachel, Joey and Chandler lived when that TV series ran in the U.S. from 1994 to 2004.

New York’s Grand Central Terminal — commonly referred to simply as Grand Central — holds many secrets. The railroad terminal, built in 1871, for example, has a clandestine railroad that leads to the Waldorf Astoria luxury hotel, a top-secret room that does not appear on any blueprints, and a tennis court.

The terminal’s Whispering Gallery, an area located beneath four archways, mystifies visitors with its acoustic qualities. When two people stand at the opposite arches and whisper, they clearly hear each other’s words despite the 10-meter distance. People say the legendary jazz musician Charles Mingus used the gallery to whisper a marriage proposal to his wife.

New York is a city of superheroes for several reasons and not just during the annual Comic Con festival, which hosts the creators and fans of all the latest comics, graphic novels video games and movies.

New York is also the inspiration for both Gotham City and Metropolis, the fictional homes of major American comic-book heroes Batman and Superman, respectively. This city is where those protagonists work, live and save humanity from evil. Captain America was born in Brooklyn, and Spider-Man in Queens. Iron Man, Daredevil, the Avengers and the members of the Fantastic Four all “reside” in New York.