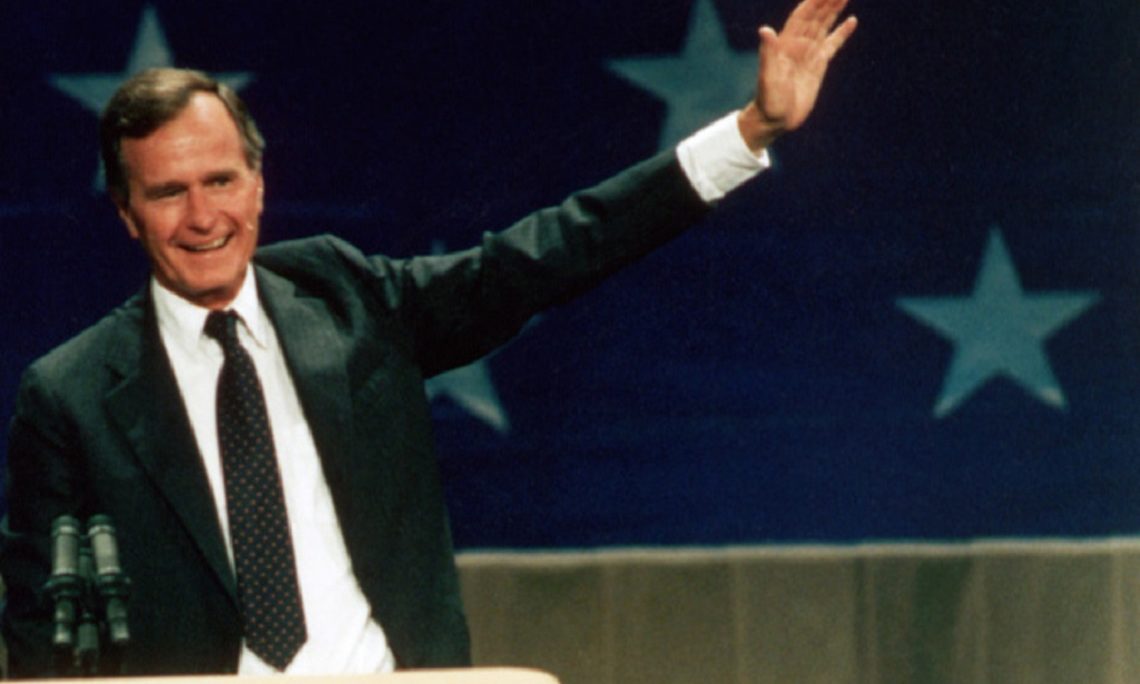 George Herbert Walker Bush, who served as the 41st president of the United States, died November 30 at the age of 94.

He was the longest-lived president in U.S. history and a statesman whose service to his country spanned his entire adult life. Before becoming president, he served in posts ranging from Navy pilot to Central Intelligence Agency director to vice president of the United States.

As president, from 1989 to 1993, Bush helped usher in a spread of freedom and free markets. The West prevailed in the Cold War, and the Berlin Wall was dismantled, resulting in a unified Germany. Bush also signed two treaties to drastically reduce the threat of nuclear war.

Bush’s deft handling of foreign affairs was a hallmark of his presidency. After Kuwait was invaded by the forces of Iraqi dictator Saddam Hussein in 1990, Bush forged an effective coalition of nations to preserve international law. When the Gulf War ended in early 1991, as the coalition overpowered the Iraqi aggressors, Bush enjoyed high public approval ratings. Later in 1991, Bush convened the Madrid Peace Conference to revive the Israeli-Palestinian peace process, and throughout his term in office, he worked closely with international counterparts to advance peace and prosperity.

On the domestic front, Bush worked with Congress to pass the Americans with Disabilities Act and the Clean Air Act — landmark civil rights and environmental laws.

He promoted volunteerism across America, saying that “there could be no definition of a successful life that does not include service to others.”

A life of service

The principle of serving others was ingrained in Bush from an early age. He credited his parents — especially his mother — with emphasizing a duty to one’s country and community.

Born in Milton, Massachusetts, on June 12, 1924, Bush postponed his university education to enlist for military duty during World War II. As a wartime naval pilot, Bush flew torpedo bombers in 58 combat missions and was awarded the Distinguished Flying Cross and other decorations.

After the war, Bush married Barbara Pierce and enrolled at Yale University. He graduated from Yale in 1948 and moved to Texas with his wife and their young son to make his way in the oil business.

Bush’s dedication to public service continued in his adopted state of Texas, spurred in part by family tragedy. Bush and his wife started a foundation to support cancer research following the death of their 3-year-old daughter, Robin, from leukemia.

By the 1960s, Bush was well established in the oil business but turned his attention to politics. He served in the U.S. Congress from 1966 to 1970 and was appointed U.S. ambassador to the United Nations, where he remained for two years. From 1974 to 1975 he served as U.S. envoy to China under President Gerald Ford. Ronald Reagan selected him as his running mate, and thus Bush served as vice president from 1981 to 1989.

After his presidency ended in 1993, Bush and his wife returned to Houston. At the request of his son President George W. Bush, the elder Bush worked with former President Bill Clinton to raise funds for relief efforts following the catastrophic tsunami in Southeast Asia in December 2004 and Hurricane Katrina in the U.S. Gulf Coast states in August 2005.

In October 2017, Bush joined the four other living former U.S. presidents — Jimmy Carter, Bill Clinton, George W. Bush and Barack Obama — to form the One America Appeal, raising funds for victims of hurricanes that struck Texas, Louisiana, Puerto Rico and the U.S. Virgin Islands. The five appeared onstage at a concert in Texas, urging Americans to set aside political differences to help.

The elder Bush — known informally as “41” to distinguish him from his son George (the 43rd president, or “43”) — survived his wife, Barbara, who died April 17. He will be laid to rest beside her and their daughter Robin on the grounds of the George H.W. Bush Presidential Library and Museum in College Station, Texas.