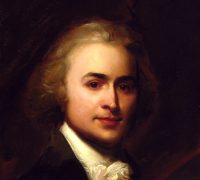 Appointed by President James Madison, John Quincy Adams was the first official U.S. representative to Russia, serving with the official title of Minister Plenipotentiary in the Russian imperial capital of St. Petersburg. Son of President John Adams, a gifted linguist, he became Minister to the Netherlands (1794), to Portugal (1796), Prussia (1797-1801), a member of the U.S. Senate (1803-1808), Minister to Russia (1809-14), Minister to England (1815-17), and Secretary of State to President James Monroe (1817-25). The Presidential election of 1824 was decided, according to the Constitution, by the House of Representatives; Adams, second in the electoral vote, was chosen over Andrew Jackson, and served as the Sixth President of the United States from 1825 to 1829. After leaving the White House, he served nine terms in the House of Representatives, dying in the Capitol Building in 1848. Adams first visited Russia in 1781 as French-language interpreter for U.S. envoy Francis Dana. He served in St. Petersburg during Napoleon’s invasion of Russia, strolled along the banks of the Neva with Czar Alexander I, and visited the Observatory in Pulkovo Heights. At the request of dictionary author Noah Webster, he provided books of Russian grammar and vocabulary, the beginning of Russian studies in the United States. His infant daughter died and was buried in St. Petersburg.