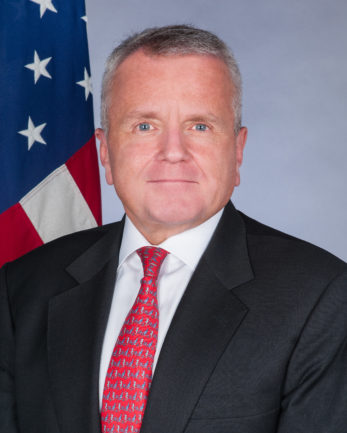 John J. Sullivan was nominated as the U.S. Ambassador to the Russian Federation by President Donald Trump on October 11, 2019; confirmed by the Senate on December 12, 2019; and sworn in by Secretary of State Mike Pompeo on December 23, 2019.  Mr. Sullivan was asked by President Joe Biden in January 2021 to continue his service as Ambassador to the Russian Federation.

Prior to joining the Department of State, Ambassador Sullivan was a partner in Mayer Brown LLP, and co-chair of the law firm’s national security practice.  From 2010 to 2016, he was the Chairman of the U.S.-Iraq Business Dialogue, a governmental advisory committee on United States economic relations with Iraq.

In addition to his decades of experience in private law practice, Ambassador Sullivan served in two prior administrations in senior positions at the Justice, Defense, and Commerce Departments.  He served until 2009 as the Deputy Secretary of Commerce, following his service from 2005 to 2007 as the General Counsel of the Department.  Previously, he was appointed Deputy General Counsel of the Defense Department by Secretary Donald H. Rumsfeld.  In the first Bush Administration, Ambassador Sullivan was Counselor to Assistant Attorney General J. Michael Luttig in the Justice Department’s Office of Legal Counsel.

A native of Boston, Massachusetts, Ambassador Sullivan received his bachelor’s degree from Brown University and his law degree from the Columbia University School of Law, where he was a Harlan Fiske Stone Scholar and Book Reviews Editor of the Columbia Law Review.  Ambassador Sullivan was a law clerk for Associate Justice David H. Souter of the Supreme Court of the United States, and for Judge John Minor Wisdom of the United States Court of Appeals for the Fifth Circuit.