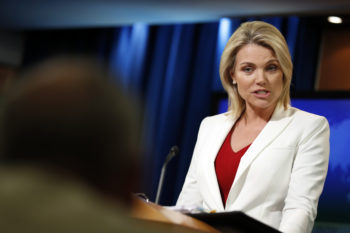 State Department spokeswoman Heather Nauert speaks during a briefing at the State Department in Washington, Wednesday, Aug. 9, 2017. The State Department says President Donald Trump is “on the same page” with the rest of U.S. government with his fiery threat to North Korea. Nauert said the White House, State Department and Pentagon are all in agreement. She says the world, too, is speaking with once voice. (AP Photo/Alex Brandon)