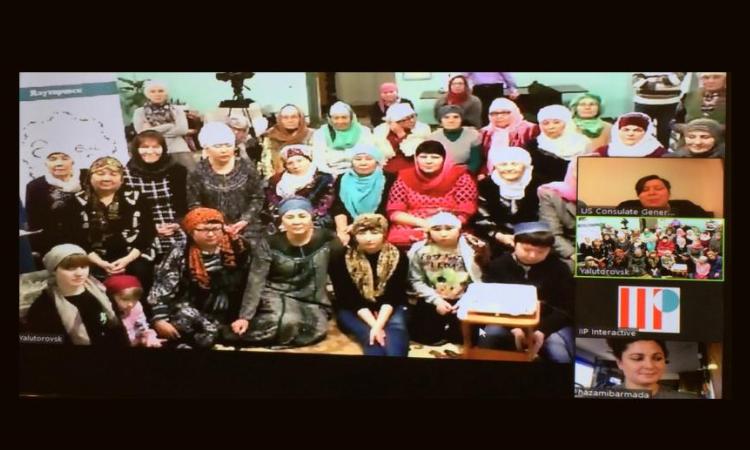 Hazami Barmada, co-founder of Al-Mubadarah and prominent civic leader connected via video conference with Muslim women in Russia. The audience included representatives of the Inter-ethnic Information Center in Yekaterinburg and a Muslim Women’s Club composed of Siberian Tatars at the Yalutorovsk Mosque.  The discussion focused on the hot topic of social entrepreneurship as a business model for social innovation. Although many Muslim women are often limited in the role they can play outside of the household,  many are nonetheless looking for the ways to work from home and to be helpful to their families and communities. Hazami talked about  successful cases of social entrepreneurship in the Arab world, including scarf production by Arab refugees in the United States, Syrian soap-manufacturing small businesses, rapidly growing e-commerce enterprises in the Middle East and African countries, etc.  Ms. Barmada paid special attention to the necessity of networking and establishing social and business connections to create a support system for new ideas and business plans. Trust and credibility was another issue underlined by Hazami.  Yalutorovsk women loved Hazami’s suggestion of conducting a regular ideation club to brainstorm new ideas. The women agreed to stay in touch and connect later in the year with a similar women’s community in the States to continue the dialogue.