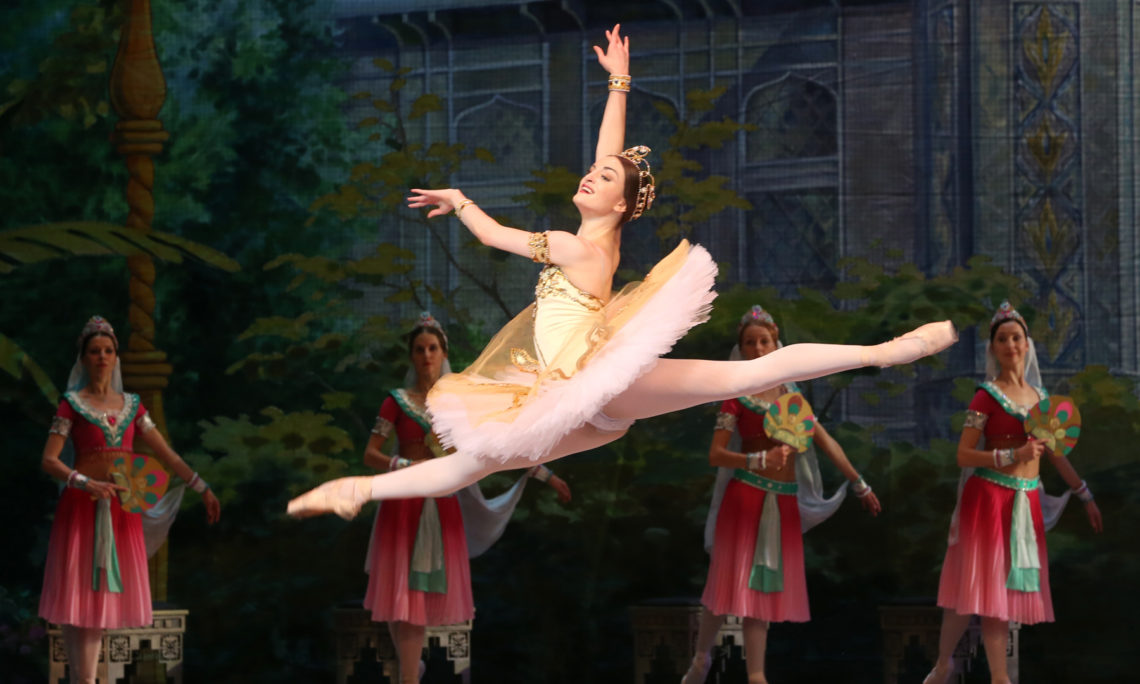 Womack was interviewed recently by ShareAmerica intern Douglas Namur in a Moscow coffee shop. What follows is a condensed version of Womack’s story, in her own words.

Is the world your oyster?

I think Russia has always been this mysterious place for me. It had an impact on my life because of my grandparents. During the Soviet Union, my grandfather was the founder and editor of Scientific American, so he was working closely with Sergey Kapitsa (of the popular and long-running Russian scientific TV show Evident, but Incredible).

When I started ballet, I told my mom at the age of 7 that I would be a soloist at the Bolshoi Theatre. She said, “No you’re not!”

I used to think that ballet was just something you did after school. This changed when, at 7 years old, I went with my mother to see the Bolshoi perform Swan Lake and she told me that this was their job, that this was what they did for work. At the time, I was studying in [Los Angeles], in the American style, in the American sort of dream. The ballet version of the white picket fences is to be chosen to join the New York City Ballet and become a professional dancer. To live on the Upper West Side and work in Lincoln Center.

But that changed when I was 12 and moved to Austin [Texas]. In the middle of nowhere, my mom was able to find a Russian teacher. This woman helped me find my priorities. She asked me, “Do you want to dance in America — or do you want the world to be your oyster?”

After working with her I got accepted into the Kirov Academy in Washington. Living in Washington for two years was an incredible experience. It opened my eyes to what I want, as well as multiculturalism. I also understood that being in the arts is something that can benefit the community.

But after two years in Washington, I felt like I wasn’t being challenged anymore. I went to New York and attended a master class held by a teacher that was visiting from the Bolshoi. After the class this teacher asked me if I wanted to come to the school right away.

Even at 14 I knew this was an opportunity that wouldn’t repeat itself — I had already missed several opportunities. In ballet, you have to grow up early. Your childhood ends quickly. I remember when my family would travel away for Thanksgiving while I was training and performing The Nutcracker. But I was an odd child: I liked the pain, I liked the blisters, liked the sacrifice — it wasn’t difficult for me in a sense, I wanted it.

At the time other options were the American Ballet Theatre as well as other schools or private teachers I could have gone to, but I was looking for a place that could give me an edge. But at the same time I was doing something that there was no guidebook for. This was probably the scariest thing. There was no one that I could turn to for advice.

When I came to my parents with the invitation from Moscow they were a bit hesitant, but they knew that this was an opportunity that I wouldn’t let go. There was no other option besides going.

Moving to Moscow seemed more like a continuum of something that I wanted throughout my whole life.

A headline in the New York Times, a move to Russia

In Washington I learned a small portion of what they do in Russia, which is what allowed me to come. When I first arrived in Russia I was dancing with third-year graduates, something that is unheard of. My teacher was pushing me ahead of the girls in the graduation class. And putting her reputation on the line. I didn’t even speak Russian at the time.

Thinking back, I wouldn’t say that I was “special,” but I can say that I worked hard. I didn’t have the facilities that the other girls had, so I needed to put in the time to make up for it.

The New York Times article that came out shortly after I moved [to Russia] played a pivotal role in shaping the dynamics of my circumstance in Moscow. At 15, being on the front page of the NYT increased the pressure and brought to my attention that now there will be high expectations of me. But I am grateful for that pressure. It helped shape who I was and introduced me to the feel of social media, the media and how creating content and telling your story is vital to your mission.

In the end, I knew that if I was able to succeed in moving, studying and developing my ability to perform I would have the edge over the competition. What I feared most wasn’t Russia, but failure. The fear of failure spurred me on for the next three years. During the second year when I wanted to give up — and the third year when I thought to myself “What’s the point?” — my greatest motivation was the fear.

What brought me here in the first place and what has kept me here is the fact that I am scared out of my wits of comfort. I always want to be moving forward and challenging myself. I am afraid of anything that is nice and easy.

The Bolshoi makes the ballerina

The Bolshoi made me into a ballerina. I worked hard and waited for my chance, which eventually came when I was 17. I debuted as a principal dancer in the Bolshoi’s production of La Fille Mal Gardee. I had the opportunity to represent Russia abroad, and that is something that I will never forget.

I couldn’t be happier with the way things turned out, because now I can stand with my head held high going to the Bolshoi. Once I went back, I saw my old teacher, and she said: “I always knew you were a good dancer. You should come back.”

Currently, Womack is preparing for the debut of Beauty and the Beast at the Kremlin Ballet Company in the heart of Moscow, but her work continues to take her all over the world. As she prepares for a summer 2017 competition in Moscow, she is also collaborating with the national ballet in Cuba.