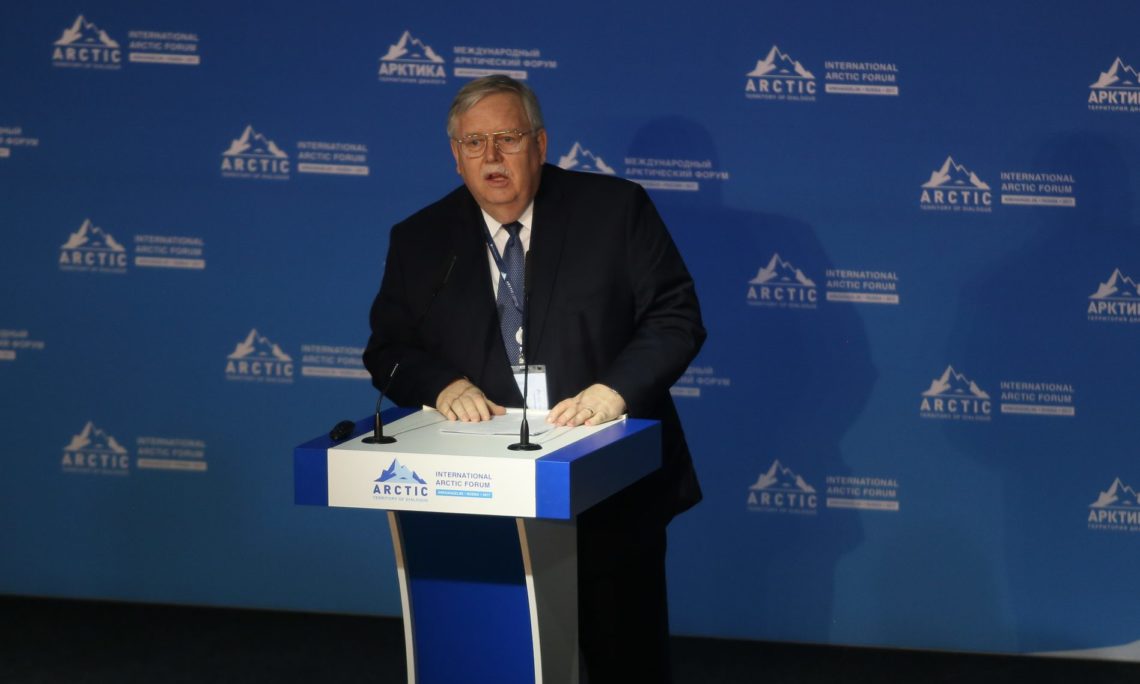 Good morning distinguished heads of state, officials, ladies and gentlemen. I want to thank the Russian State Commission on the Arctic for organizing this conference and for inviting me to address you as the United States representative. I am pleased to have the opportunity to speak to you about one of the great challenges of our time – ensuring a secure and sustainable future for the people and resources of the Arctic, and protecting its vitally important ecosystems.
Compared to many other parts of the world, the Arctic remains a peaceful and politically stable place, marked by a high level of cooperation among the relevant governments. As the many speakers before me have said, this cooperation significantly reduces the risk of serious conflict in the Arctic. We also regard the Arctic as a low-threat environment for terrorism, trafficking, mass migration and a number of other difficult problems that face us around the world.

There are, however, serious challenges in the Arctic – including socio-economic, environmental, and the potential militarization of the Arctic. We are all aware that significant changes are occurring in the Arctic environment. These changes require us to look for creative ways to manage and protect the Arctic’s resources, both natural and human. A warming atmosphere is making shipping, hydrocarbon extraction, commercial fishing, and tourism more feasible in the Arctic. The U.S. private sector is leading the way in investment in these sectors, creating jobs and opportunities for many of our people and businesses. At the same time, our national laws and those of the State of Alaska require companies operating in these sectors to ensure their activities, their businesses, are environmentally sound. Companies must be prepared to take remedial steps in the event of accidents or other unintentional damage to the environment. Our Coast Guard and emergency management authorities are prepared to assist where they are needed.

The United States has also taken steps to mitigate the effects of the warming atmosphere on the people of Alaska, encouraging research to advance our understanding of climate dynamics and help prepare for the future. This is critical for Arctic communities in order to build resilience in the face of rapid change. Assistance has been provided to relocate endangered communities to create new economic opportunities for those whose traditional livelihoods are threatened. Indigenous groups in Alaska have been empowered through a unique form of incorporation that gives them control over local resources, allowing them to make their own decisions regarding their lives and their future.

Looking beyond our own borders, we see that as more of the Arctic becomes accessible for longer periods of the year, more non-Arctic countries are taking an active interest in accessing the region and its resources. It is crucial that maritime countries come together to form a policy that allows all countries to benefit from these resources while doing their part to ensure sustainability. For that reason, the United States, along with the five countries with coastlines along the Arctic Ocean, signed a Declaration in 2015 to prevent commercial fishing from starting in the central Arctic Ocean until we have enough scientific information with which to manage such fishing. We are currently chairing a broader set of negotiations to transform this declaration into a binding agreement among those nations and also China, Iceland, Japan, South Korea and the European Union. We expect an agreement to be reached no later than this summer.

We were also pleased to join with other nations in the International Maritime Organization to adopt the Polar Code to strengthen the regulation of shipping in both Polar Regions. The Code entered into force on January 1st of this year; we are looking forward to working with Russia and other States in ensuring its effective implementation.

Of course, the United States is not alone in valuing sustainable development in the Arctic. It is a value we share with all of the other Arctic countries, and one that we have all effectively pursued through the Arctic Council. Last year the Arctic Council celebrated its 20th anniversary. I think this is a perfect time for the countries and permanent participants of the council to reflect on the accomplishments of the last two decades to let those successes be our guide as we continue to work cooperatively toward a sustainable future.

The United States set three goals for its current chairmanship of the Arctic Council: addressing the impact of climate change, effectively managing the resources of the Arctic Ocean, and fostering socio-economic development in the region. I am happy to say that working together, we think the Council has made progress in all of these areas. The common thread running through all of our priorities – sustainable development, managing oceans resources, and ensuring sustainable socio-economic development – is the need for scientific research to further our understanding of the unique conditions of the Arctic. The signature achievement of the Council over the last two years has been the negotiation of an agreement on scientific cooperation in the Arctic, which will be signed at the upcoming ministerial meeting in Fairbanks, Alaska in May.

The information produced through research conducted under this agreement will help make science-based policy decisions in the region. The agreement will help countries to identify the important challenges of the region and the global implications of those challenges. It will strengthen observation and data sharing, apply science to build Arctic resilience and shape global responses, and empower Arctic inhabitants through scientific education.

As we prepare for the ministerial, when the United States will turn over the chairmanship to Finland, we want to extend our thanks for the hard work that the Council and its working and expert groups have done, the support national governments and regional governments have given to the Council’s work, and the valuable insight and advice indigenous groups have provided us. We are pleased that Finland plans to continue the projects begun under the U.S. chairmanship and expand the scope of our joint work in several areas.

Again, I want to thank our hosts for organizing this event and giving me the opportunity to share the U.S. perspectives on the future of this region that is so crucial to all of us here today.