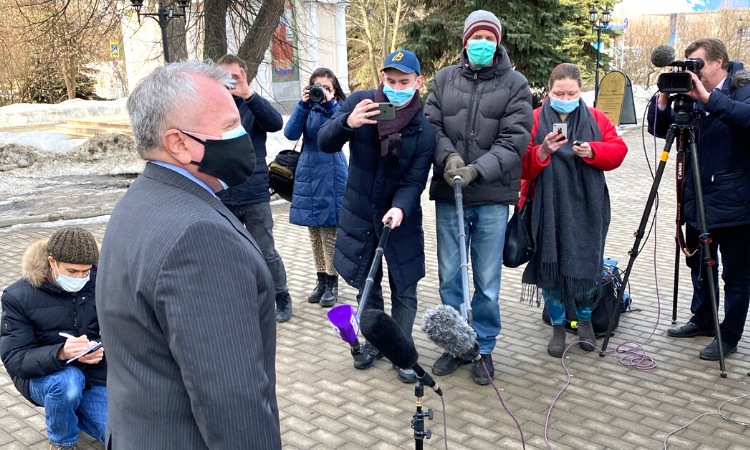 Ambassador Sullivan:  Hello, good morning, everyone.  It’s good to see you on a beautiful day in Moscow.  I came here today to attend the continuing proceedings in the appeal of Trevor Reed’s case.  The proceedings for today have concluded.  The case itself has not; there will be further proceedings.  I won’t comment on the substance of the proceedings other than to say we hope and expect that justice will be done by the judicial system here, and that Trevor will be released, and able to return home to his family as soon as possible.

The health and welfare and well-being of Americans in Russia is my highest priority.  And as many of you know, I’ve been following Trevor’s case very closely and I’m very disturbed by how he’s been treated.

There were some problems recently where Trevor was transferred between institutions here in Moscow, and the embassy was not notified, as it should be, of his whereabouts.  So, we monitor very carefully his well-being and we’ll continue to be zealous advocates on his behalf.  And I’d welcome a few questions.  I only have a few minutes.  But I welcome a few questions.

Question:  Well, how does Mr. Reed feel himself and what happened today in the proceedings?

Question:  And how does he feel?  How does Trevor feel?  Did you see him in person today and we know that last week you visited him in detention.

Ambassador Sullivan:  At SIZO 5, yes.  Thank you for the for the question.  I welcome the opportunity to talk about Trevor because he is a remarkable young man.  I can’t imagine what he’s gone through over the last over a year-and-a-half, being subjected to incarceration for a crime that he’s obviously not guilty of.   And he’s doing as well as possibly could be expected under the circumstances, and it says a lot about his resilience and his character as a human being.

Question:  Do you plan any meetings with Ambassador Antonov, who is currently in Moscow, and do you plan a relevant visit to Washington for consultations on the state of U.S.-Russia relations?  Thank you.

Ambassador Sullivan:  No, I have no travel plans.  My expectation is that I will be here for the for the foreseeable future.  And I always welcome the opportunity to speak with my friend, Ambassador Antonov, and the colleagues that I engage with at the Ministry of Foreign Affairs.

Question:  Have there been any talks about the swap?  The exchange of Trevor for other Russians who are [incarcerated] in the United States?

Ambassador Sullivan:  Right, I appreciate the question.  I won’t comment on discussions that the United States has had with the Russian government on Trevor’s case, other than to say that we continue to advocate for his proper treatment while in custody and for his immediate release, because he is clearly not guilty of the crime that he’s been charged with.  So as I said at the outset, he is always at the forefront of my mind and I’m thinking about him and his welfare, and we’ll continue to be zealous advocates working for his release.

Question:  So, are you confirming that the talks are going on?

Thank you.  Thank you very much.