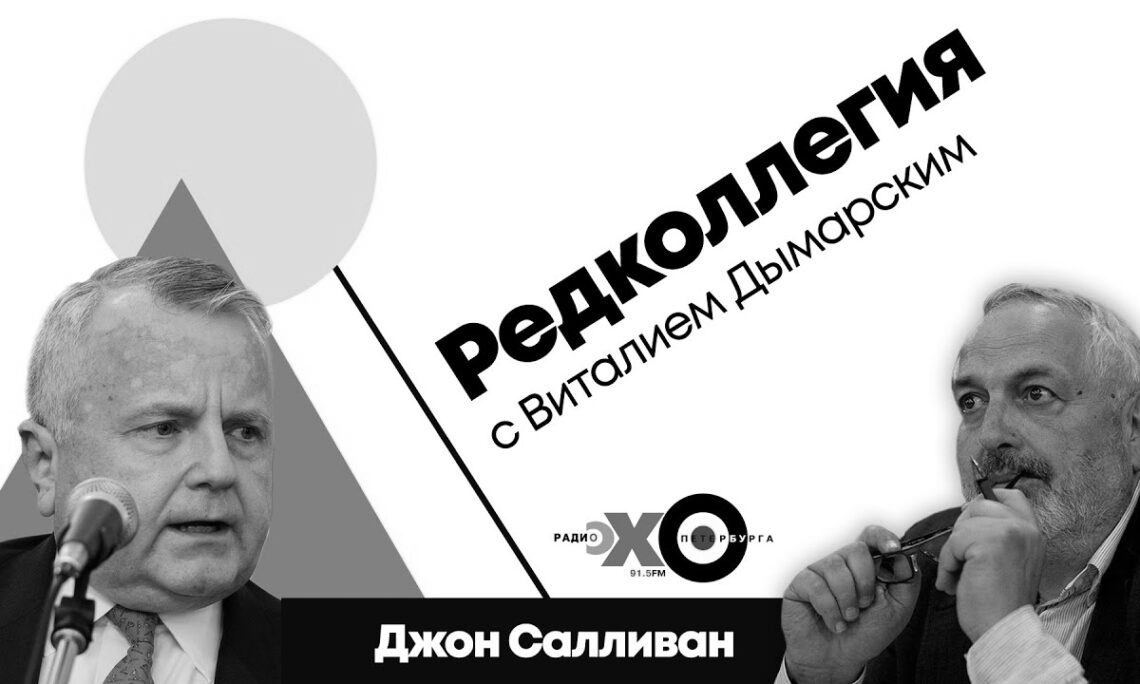 Ambassador Sullivan: Well, thank you very much for that warm welcome, and any trip to St. Petersburg is a pleasure. This trip for me is strictly business. I planned to visit St Petersburg in March of last year, 2020.

But the COVID pandemic prevented my travel, so I would have been here almost a year and a half ago. It’s important for me to come here to St Petersburg, which is such an important center of culture and art and the academy for Russia.

But as I say, the city is so beautiful and there are so many attractions that even though I’m here on business, it’s a wonderful place to be.

Vitaly Dymarsky: I know that it is not your first time in St. Petersburg. You were here not in the position of the ambassador, but as an ordinary tourist, if I’m not mistaken. 32 years ago. Have you noticed any changes? Did you have a chance to see how the city has changed?

Ambassador Sullivan: Well, thank you. Yes, it was 32 years ago that my wife and I traveled here as tourists.

It was part of a month-long trip that we took to the Soviet Union and we visited St. Petersburg. We also visited Moscow. And what I’d say at the outset is – I find Moscow a much different city from the city we visited 32 years ago.

St. Petersburg, however, was astoundingly beautiful when we visited in 1989. And it remains so. It seems much more like the city that we visited those many decades ago.

Ambassador Sullivan: Certainly, the most immediate project that I came to check in on involves art restoration at the Hermitage Museum.

Last year, we donated – the United States government, the people of the United States – donated money to restore three frescoes painted hundreds of years ago – beautiful pieces of art that needed extensive restoration work. And I was honored on behalf of the American people to announce that contribution, and I followed up today with a meeting with the director to discuss the project of the restoration project, but also to see the museum again, which I visited originally back in 1989.

I’m also engaged in a number of other meetings while I’m here, including with U.S. businesses that do business here in St. Petersburg.

As I like to remind people both in the United States and in Russia, we have over 1,150 U.S. companies doing business in Russia today, many of them, if not most of them, involved here in St. Petersburg.

So meeting with representatives of U.S. businesses, meeting with students and alumni of our student exchange programs, which are very important to me personally and to the United States.

Vitaly Dymarsky: Well, in your opinion, speaking about U.S. businesses in Russia: How successful are they? And what impact does the overall climate have on the way they do business?

Ambassador Sullivan: Well, I think the proof is in the fact that, over time, as I said before, over 1,150 U.S. businesses are here invested doing business in Russia.

Having said that, there are challenges for companies that do business here and one of my jobs as Ambassador is trying to intercede on their behalf and be a representative for those instances to try to improve and make the business climate even better.

Vitaly Dymarsky: It’s not a secret that if we speak about people-to-people relations – whether it is in the sphere of business or cultural exchanges – right now, it is very limited. For example, the St. Petersburg General Consulate was closed several years ago. And so right now, if we describe the overall consular situation, the provision of consular services is very, very limited and complicated. So Mr. Ambassador, can you give us hope? Can you state that we should expect some improvement in this area?

Vitaly Dymarsky: Just before this meeting today, I got several calls from my friends that knew about this meeting. And they were asking – can you ask Mr. Ambassador, whether we’ll be able to get non-immigrant visas in an easier way than right now? Because right now, it’s almost non-existent – the interviews for non-immigrant visas. So is it possible for the U.S. Ambassador or Russian government to make some steps that would make this process of getting visas easier?

Ambassador Sullivan: Well, first, let me start by acknowledging the premise of your question, which is that the bilateral diplomatic relationship between the United States and Russia is not in very good shape today.

As you note, as part of the tit-for-tat diplomatic expulsions, we were required to close our consulate in St. Petersburg. Similarly, the Russian government was required to close its consulates in San Francisco and in Seattle. Simultaneously, as part of the diplomatic expulsions, the size of our overall mission here in Russia has shrunk fairly dramatically.

So a combination of a large reduction in the number of personnel we have work in our mission in Russia, combined with COVID has compelled us to suspend operations at our consulates in Vladivostok and Yekaterinburg.

They’re not closed, but we aren’t able to provide regular services. There are no consular services even in Yekaterinburg. In Moscow, we have had a very dramatic reduction in the number of our personnel working at the embassy.

And as I’m sure you’re aware, on August 1, we’re going to be required to separate locally employed staff, many of whom have worked for the embassy for many years.

So the bottom line is – after August 1, our embassy in Moscow is going to be one tenth the size of what it was five years ago in 2016.

But I don’t want to focus only on the bad aspects of the relationship, because we have been engaged. We the United States have been engaged in a dialogue with the Russian government, and, in particular, with the Foreign Ministry to try to improve the situation.

This is an outgrowth of President Biden’s meeting with President Putin in Geneva, which I’m sure you’ve seen was widely regarded, and I know by our president, was regarded as a successful professional business-like meeting.

But as President Biden has said multiple times now since the meeting in Geneva, now the hard work begins.

Whether it’s on major policy issues such as a strategic stability dialogue or discussions on cyber issues, or the issue that you asked about concerning consular services and non-immigrant visas at the U.S. Embassy. That’s an issue that affects average Russians, average Americans, U.S. businesses that are doing business here.

So not only I, but my colleagues at the State Department in Washington, have had a number of conversations with senior Russian government officials to address the diplomatic relationship and the status of our missions, the U.S. Mission in Russia, the Russian Mission in the United States. I’ve had several meetings since my return from Washington. They have been productive. They’ll continue. And I’d like to leave it at that because I want to keep my conversations with my Russian government interlocutors between us for the time being.

Vitaly Dymarsky: Well, okay, let’s leave it with this. And at least from your words, I would like to get some hope that we’re still expecting some improvement in the future.

Ambassador Sullivan: We’re going to work as hard as we can, and that is certainly the charts that I received from President Biden after the meeting in Geneva, in sending me back to Moscow. And I come back with a lot of enthusiasm for the hard work that needs to be done. I’ve, as I say, had a number of productive meetings so far and will continue along that path.

Vitaly Dymarsky: Well, it’s great that after the Geneva summit, there is some optimism in our bilateral relations, and we’re talking about it. But we’d like to have the really practical results from that. It’s great that we have started the dialogue on strategic stability. But at least for the average citizens to feel the results of this work for the so-called people-to-people relations to feel the results of this work. That’s what is really important.

Ambassador Sullivan: Yes, I couldn’t agree with you more. And it’s one of the reasons for my visit to St. Petersburg to engage with – I met with academic leaders yesterday. I’m concerned about the decline in our academic exchanges. I’m concerned about the decline in exchanges between museums in the United States and museums here in Russia. So there’s a lot to be concerned about. There’s a lot to do. As President Biden said in his press conference, at the end of the meeting in Geneva, we’ll see what progress we’ve made in the next six to 12 months. I think it’s fair to say President Biden isn’t overconfident. He has set an agenda for me as ambassador to come back to work on these issues, and I will work as hard as I can and as cooperatively as I can to make progress not only on the big issues, like strategic stability and cyber, but on the other issues, including visas that affect ordinary people in the United States and in Russia.

Ambassador Sullivan: Well, I don’t know about that, but I am very much aware of the history of St. Petersburg and Leningrad, and its significance in President Putin’s life and his family’s. His father was very seriously wounded here during the war defending Leningrad. The heroism of the people here during the war, during the siege has always been one of the most attractive features of this city. As beautiful as it is, the strength and the heroism of the people here has always been, I think, the most attractive feature.

Vitaly Dymarsky: So for you as a representative of an older generation: how important is that World War?

Ambassador Sullivan: My father served in the U.S. Navy during the Second World War in the submarine service. So he was a combat veteran of World War II in the war in the Pacific, and his brother, my uncle, also a Navy combat veteran, served on a destroyer that supported the U.S. landing at at Normandy on June 6, 1944.

So the sacrifices of my parents’ generation – and of President Putin’s generation – Russians and Americans – in winning the Second World War has been a major part of my life growing up.

And it’s something that continues, 75, 80 years later, to unite us. Two peoples that combined successfully to prevail in that war and save humanity from the terror that awaited if the Nazis had prevailed, or the Japanese Empire had prevailed against us in the Pacific.

Vitaly Dymarsky: Mr. Ambassador, there are no objective reasons for our two countries to have negative relations, because our two countries share a long history of cooperation and collaboration. So I would like to express my thanks for your visit to St. Petersburg. I hope that it will help the overall bilateral relations and the common people will feel it on the level of the people-to-people relations that they will be able to visit both of our countries. So welcome once again to St Petersburg. Please enjoy the beauty of this city, and I wish you success in all your beginning.

Vitaly Dymarsky: Now you’re here during the hot summer, during the soccer European Championship, but I know that you’re a hockey fan, so please come again during winter.