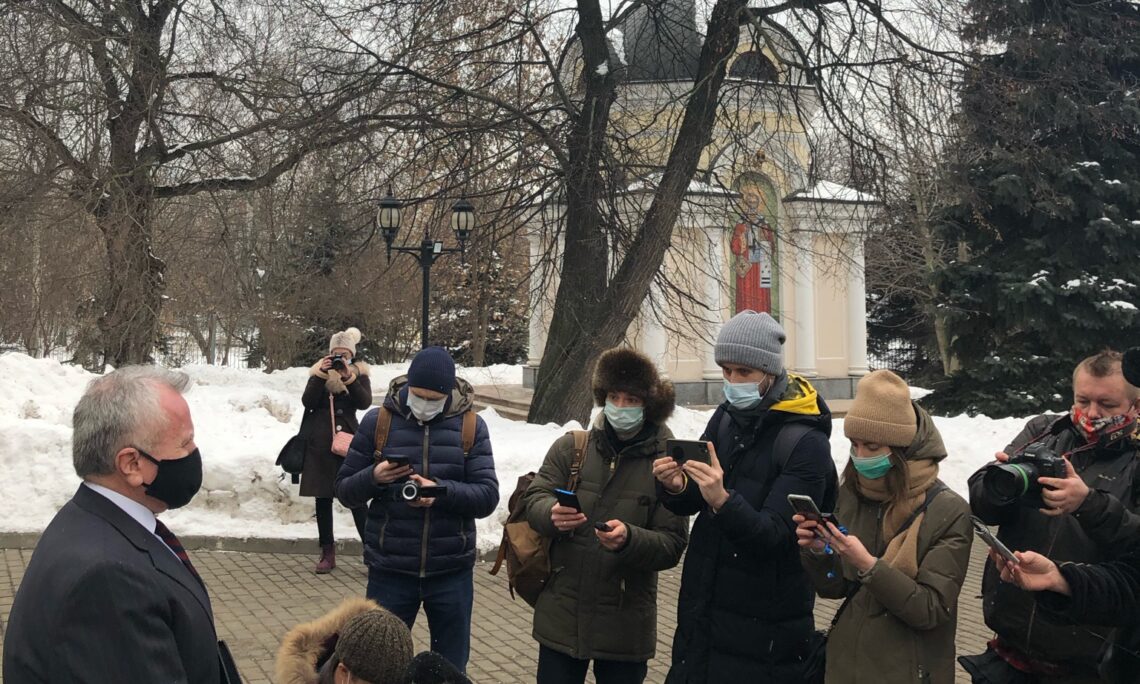 Ambassador Sullivan:  Well, good afternoon, everyone.  I’m John Sullivan, the U.S. Ambassador to the Russian Federation. I have been here today to attend the court proceeding, the appellate proceeding, for Trevor Reed, an American citizen who has been unjustly convicted of a crime that he didn’t commit.  The proceedings are ongoing. There is a break now. I need to leave to attend to whether other business but my colleagues from the embassy are here, and will be continuing to witness the proceedings.

My presence here is, as I’ve followed this case very closely, it’s – as I’ve said many times, among my highest priorities as Ambassador – the highest priority – is the welfare of American citizens here in Russia. And Trevor Reed’s case has been at the top of that list since I got here. Trevor’s been incarcerated for almost a year and a half now. And you know, you’re familiar with my comments from the trial and his conviction last summer, I believe that was – it was a mockery of justice. My hope and expectation is that these proceedings will remedy that, and that Trevor will be released immediately so that he can return to his family in the United States, in Texas. And with that, I will be happy to take a few questions.

Question: Yeah, I was going to ask about the travel visa resumption. Is there any – so, when will the embassy renew this process of visa, travel visa, issuance?

Ambassador Sullivan:  Sure, that’s a question that is asked very often. Visa processing, visa services, are extremely important at any U.S. embassy, and for this embassy in Moscow it’s absolutely the case. Unfortunately, because of the COVID pandemic and the restrictions that we’ve had to impose, and that have been mandated by our government, we haven’t been able to have regular visa services. I don’t have an answer to the question as to when they will resume other than to say, as soon as it’s safe for us to do so, we will do so because it’s a very important issue.

[NOTE: For more information on visas, please visit our website at https://ru.usembassy.gov/visas/.  If you have an urgent need to travel, please follow the guidelines at https://ustraveldocs.com/ru/. )

Question:  Yesterday we had some pretty tough claims of Russian Foreign Affairs Ministry about actions that foreign diplomats have taken in Moscow regarding the Navalny trial. Do you have any comments on this situation? And have you received an official notification from the Russian side? Or rather, maybe you expect this notification.

Ambassador Sullivan: I have not received any recent notifications from the Russian side on this in the last few days. I’ve seen statements that have been made on, I guess, on social media. What I would say is, what I’ve said previously is that our embassy, any statements that we have issued have been to protect U.S. citizens, in fact to keep U.S. citizens away from any protests that are being organized. We’re not, — we’re simply looking to protect Americans. And with respect to the Navalny case itself and the arrests, you’ve heard what Secretary Blinken has said. The President has raised this, our President has raised this with case with President Putin.

My foremost thought today is with my fellow American Trevor Reed, who’s here in court and seeking his freedom. And my hope and expectation is that the Russian judicial system will do right by him and that he will be free and we’ll be able to send him off at the airport when we send him home, back to see his family in the United States.

Question:  Do you see Trevor Reed as a hostage?  Are there any talks about the swap? Are there, any concrete steps are taken?

Ambassador Sullivan:  Well, I’d say a couple of things about that. Trevor’s case is a high priority, the highest priority for me, and an extremely high priority for the United States government, for President Biden, for Secretary Blinken. You’ve probably seen that Secretary Blinken spoke with the families, not just with the Reed family but [also] with others yesterday. It’s an extremely high priority for us that Trevor be treated fairly, that he receive justice – and if he does, he’ll be released. And that’s why I’m here today. To speak to you about how important this case is, to the United States, to the President, to all of us, to all Americans, that Trevor is treated fairly and justly. And that’s why I’m here today.

Question: But are there any talks with the Russian side?

Ambassador Sullivan:  I’m not going to discuss those types of issues here, thank you.

Ambassador Sullivan:  You’ve seen Secretary Blinken’s statement on this. I will refer you to that, and the call for Navalny to be released and for those who were unjustly detained in the protest to be released.

Question:  I have two questions. Regarding the START treat. Did the Russian side notify officially the United States that all the procedures of certification are over. And my second question is regarding Open Skies Treaty, because yesterday, Minister Lavrov said that Russia could reconsider to withdraw [from] this treaty. How could you comment?

Ambassador Sullivan:  Sure. I’ll take the second question first. I think you’ve seen Secretary Blinken has been asked about this, and his comment has been, the stance for the United States government is that that is under review, among many issues, Open Skies. With respect to New START, we continue to make progress in the steps that are necessary to extend the treaty, which is the intent of both sides and my expectation is that that will be accomplished very soon.  Thank you.