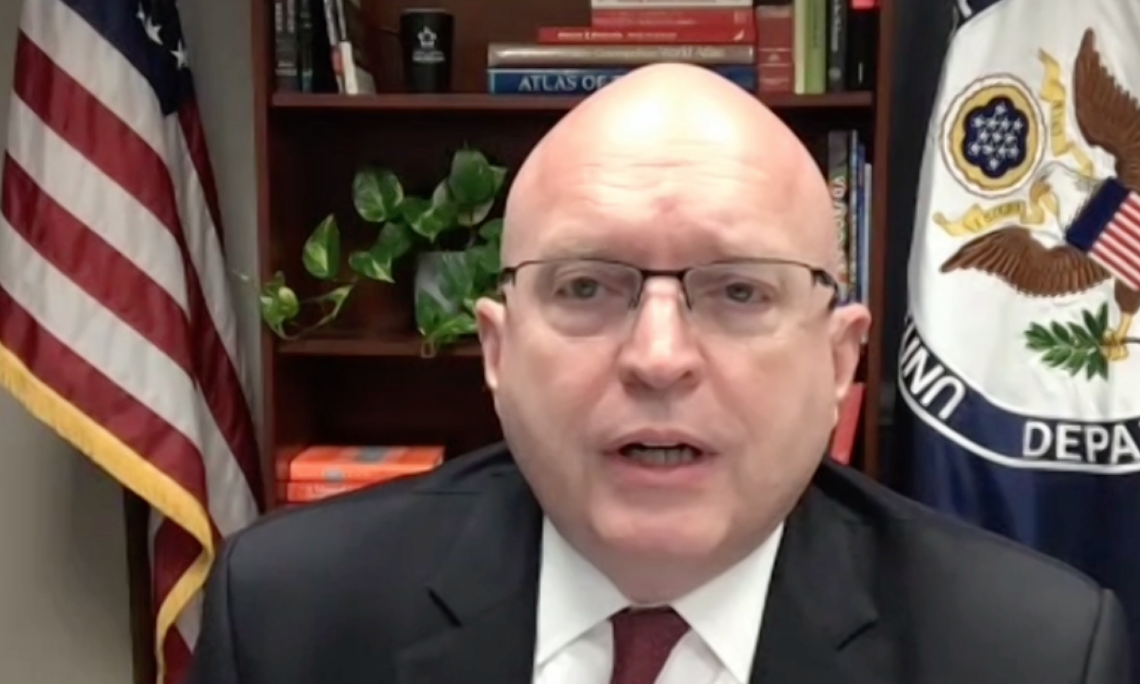 As prepared for delivery by Ambassador Philip T. Reeker
to the OSCE Side Event on Crimea
Tirana, Albania (remotely, via Zoom)
December 3, 2020

Thank you, Foreign Minister Kuleba. It is an honor to speak at this event today and to join Ukraine and other partners in highlighting Russia’s ongoing aggression in Ukraine, including its occupation of Crimea.

Russia’s purported annexation of Crimea remains the most egregious violation of sovereignty and territorial integrity within the OSCE area, illustrating Moscow’s blatant disregard for this organization’s founding principles enshrined in the Helsinki Final Act. Now nearly seven years into Russia’s occupation of Crimea, its increasing militarization of the peninsula poses a growing threat to our common security. While no country has been more affected than Ukraine, Russia’s use of its foothold in Crimea to project power in the Black Sea, the Mediterranean Sea, and the Middle East undermines regional security and affects us all. This is why the United States welcomes Ukraine’s diplomatic initiative to focus international attention on the strategic dimensions of Russia’s occupation of Crimea.

Of equal concern are Russia’s efforts to severely restrict the enjoyment of human rights, undermine fundamental freedoms, and suppress all dissent in Crimea. Russian occupation authorities continue to harass, arrest, and prosecute activists, journalists, and members of civil society, simply for expressing their opposition to the occupation or for being a member of an ethnic or religious minority group on the peninsula. They have sustained a brutal campaign of repression against Crimean Tatars, ethnic Ukrainians, and members of other ethnic and religious minority groups in Crimea, raiding mosques, homes, and workplaces without justification or process and leaving these communities in a state of constant fear.

In short, Russia makes every effort to silence any criticism of its occupation with brutal and reprehensible tactics. I was disturbed to hear the story of Server Mustafayev, who was sentenced in November to 14 years in prison for his activism in highlighting the plight of other Crimean political prisoners. He is just one of more than 90 Ukrainians Russia has unjustly imprisoned for their peaceful dissent, and one of hundreds of thousands of lives impacted by the occupation.

The United States is steadfast in its support for Ukraine’s sovereignty and territorial integrity. We do not, nor will we ever, recognize Russia’s attempted annexation of Crimea. We call on Russia to end its campaign of oppression in Crimea, release all Ukrainians it has unjustly imprisoned, and return full control of the peninsula to Ukraine. We join our European and other partners in affirming our Crimea-related sanctions will remain in place until Russia ends its occupation.

The United States looks forward to the opportunity to work with Ukraine and our other partners to bring about an end to the Russian occupation of Crimea, including through the proposed Crimean Platform. We will continue to affirm this truth: Crimea is Ukraine. We will never accept anything less than the full restoration of Ukraine’s territorial integrity.