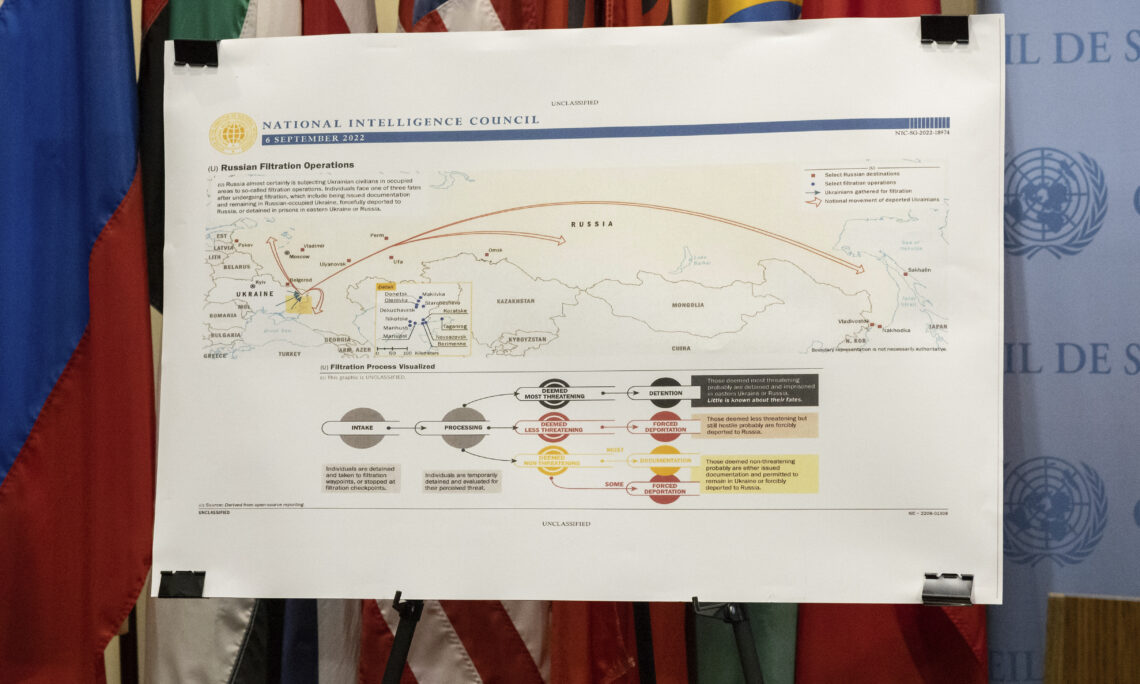 A display about Russian Filtration Operation is presented during a press conference by the U.S. Representative to the United Nations Linda Thomas-Greenfield, in the United Nations Security Council, Wednesday, Sept. 7, 2022. (AP Photo/Yuki Iwamura)

The Conflict Observatory, a program supported by the U.S. Department of State, released an independent report today that details numerous instances of unjust detentions and disappearances in Kherson, Ukraine, as they relate to Russia’s ongoing filtration operations. Russia must halt these operations and withdraw its forces to end a needless war that it cannot and will not win – no matter how despicable and desperate its tactics.

Prepared by Conflict Observatory partner Yale Humanitarian Research Lab, the new report is available at ConflictObservatory.org. It presents publicly available information about the experiences of more than 220 individuals who are victims, survivors, or witnesses to torture and other cruel, inhuman, or degrading treatment, including gender-based violence, at the hands of Russia and Russia-backed forces. Survivors and witnesses identified at least five individuals who died, as a result of their mistreatment in detention. The report also identifies 12 detention and checkpoint locations across Kherson oblast and Crimea, and notes a disproportionately high incidence of reported mistreatment of members of the Crimean Tatar community.

The Conflict Observatory is a program that independently compiles and documents evidence to support investigations of those responsible for abuses. This report and others like it demonstrate and strengthen U.S. and international resolve to pursue accountability for war crimes and other atrocities in Ukraine. The United States supports unified and coordinated action for all existing efforts to examine mounting evidence of atrocities in Ukraine, including the International Criminal Court, the UN Commission of Inquiry, the UN Human Rights Monitoring Mission in Ukraine, the expert missions established under the OSCE’s Moscow Mechanism, and the Joint Investigative Team coordinated through Eurojust. Additionally, through the Atrocity Crimes Advisory Group, the United States is working closely with Ukraine and our partners to support Ukraine’s domestic war crimes investigations and prosecutions of perpetrators.

The United States remains unwavering in its support of the government and people of Ukraine as they defend their country and their freedom. There is only one country waging this unprovoked, premeditated war of choice with willful disregard for human life: Russia. The United States is committed to holding those responsible to account, no matter how long that takes. The people of Ukraine demand and deserve justice.