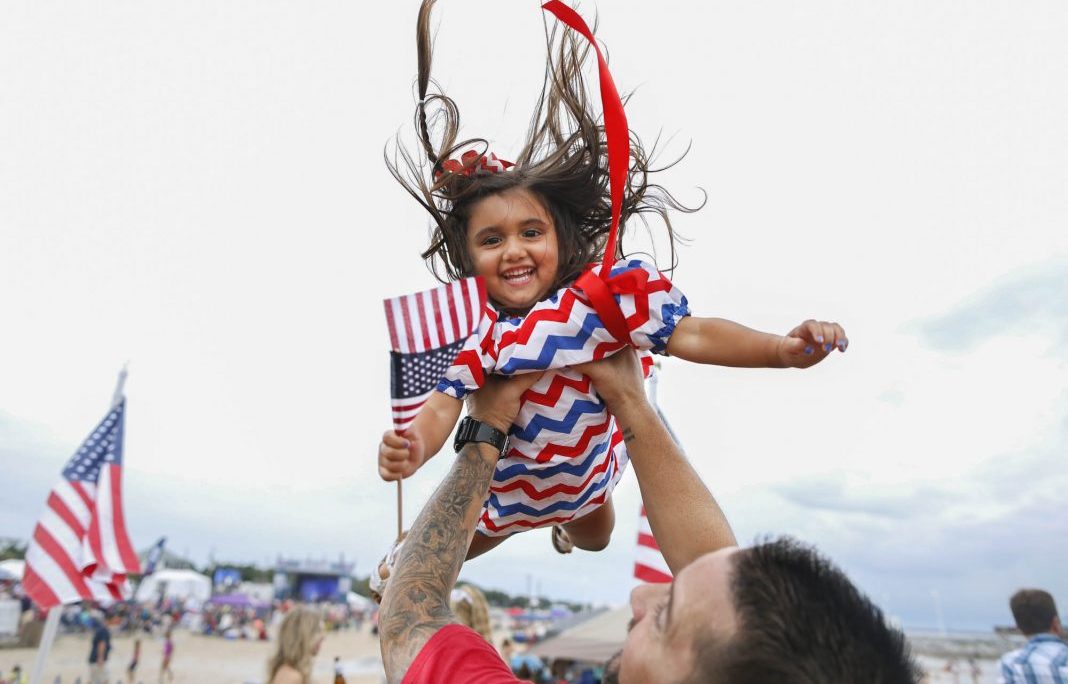 A father and daughter enjoy the Fourth of July in Waveland, Mississippi. (© AP Images)

It’s a birthday party for everyone, young and old. It takes place at fairgrounds and parks, on beaches and streets, and in people’s backyards. It is the Fourth of July — Independence Day — the birthday of the United States of America.

On July 3, 1776, anticipating the Continental Congress adopting the Declaration of Independence, John Adams wrote to his wife that the day “will be celebrated, by succeeding generations, as the great anniversary festival. It ought to be solemnized with pomp and parade, with [shows], games, sports, guns, bells, bonfires and illuminations from one end of this continent to the other from this time forward forever more.”

Flags fly high over celebrations at picnics and cookouts, reminding everyone of America’s national anthem, “The Star-Spangled Banner.” In the song, the flag represents American hope and perseverance against all odds. This woman plants flags in the ground at Liberty State Park in Jersey City, New Jersey, in preparation for crowds that will come to watch fireworks in front of the nearby Statue of Liberty.

Fourth of July parties in high-rise buildings give guests a bird’s-eye view. Here spectators watch fireworks from a Las Vegas hotel. Americans have celebrated with fireworks since 1777, when Philadelphia marked the first anniversary of the Declaration of Independence with a display over Independence Hall.

Americans love a parade, and there are probably more of them on Independence Day than any other day of the year. Anyone may join in, from marching bands to horseback riders — and little boys on tricycles in Lauderdale-by-the-Sea, Florida.

If you aren’t in the parade, you still can cheer on those who are. The Fourth of July is a community affair, often celebrated with neighborhood pool parties, contests and barbecues. Even small towns have their own parades and fireworks, as seen here in Eagar, Arizona.

Baseball and Independence Day go together like hot dogs and buns. The game spread in popularity from New York to the rest of the country after the Civil War, helping to reunite the nation. This Kansas City Royals player watches fireworks after a game at Kauffman Stadium in Kansas City, Missouri.

Concerts are plentiful on Independence Day. From jazz to country and classical to rock ‘n’ roll, music reflects the diversity of America’s cultural traditions. Here a crowd marks the Fourth by watching rhythm-and-blues singer Peabo Bryson perform at Centennial Olympic Park in Atlanta.

R&B, rock ’n’ roll and Tchaikovsky’s “1812 Overture” — complete with real cannon fire during the finale — are often heard on Independence Day. Naval ships once fired cannons in a “grand salute” on Independence Day; today, it’s more common for drums to mimic the explosions. Fans here were treated to a colorful fireworks display at the Grateful Dead’s “Fare Thee Well” concert in Chicago.